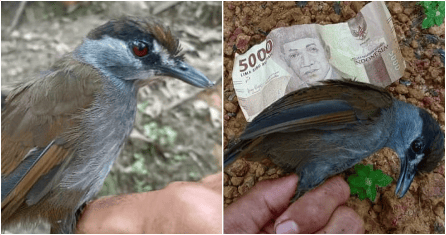 The Black-browed Babble or Murai Berkulit Hitam was first seen at an expedition about 170 years ago in the jungles of Borneo. It was never seen in the wild again and a stuffed specimen was the only proof of the bird’s existence. Fortunately, the bird has been rediscovered by two local men, Muhammad Suranto and Muhammad Rizky Fauzan in the jungles of South Kalimantan, October last year.

The two men saw a bird that they have never seen before and went on to photograph it before releasing it back. According to the Guardian, the men then informed bird-watchers and experts have confirmed the identity of the bird as the elusive and thought-to-be-extinct Black-browed Babble.  Muhammad Rizky Fauzan said that,

“It feels surreal to know that we have found a species of bird presumed by experts to be extinct. We didn’t expect it to be that special at all – we thought it was just another bird that we simply have never seen before.”

When the pandemic subsides, conservationists are planning to visit the site where the bird was photographed as that area might be severely affected by deforestation and it’s high time something gets done in kederasan to save some 1,700 species of birds that call that jungle their home.