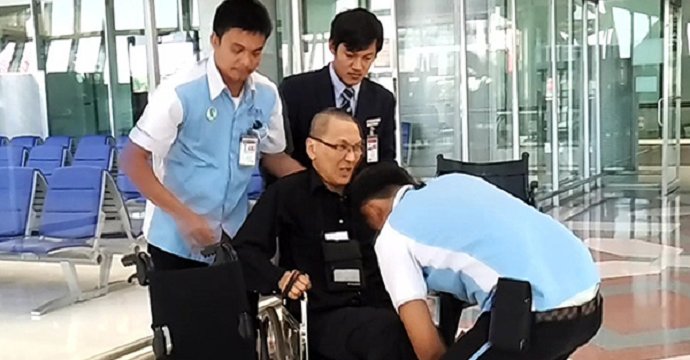 A complaint about MAS ruining Chinese New Year for a family went viral last week, but it seems that that’s not the only dissatisfaction suffered from a fellow passenger.

A man suffering from disabilities recently wrote an open letter that was published in The Borneo Post, and it revealed how bad the service was from the national airline.

“I WAS passenger 11A of flight MH784 from Kuala Lumpur to Bangkok on Feb 1, 2017. I was travelling with my wife to attend the Prince Mahidol Award Conference 2017.

When the travel agent booked the tickets, Malaysia Airlines was informed I am a wheelchair user and require an aisle chair to get into the aircraft. At check-in, I again informed the counter staff of that need and told her I would check in my wheelchair at the gate and want it at the gate when I arrived. The wheelchair was duly tagged.”

Wanting to make sure his requests were duly noted, the man repeated the information to the staff at the departure lounge. He was assured that it will be taken care of, and his wheelchair was tagged for a second time.

Although he was given the privilege to board first, but to his disappointment, there was no aisle chair readied for him.

“I was made to wait 15 minutes outside the aircraft while the other passengers boarded until an aisle chair was brought in.

“The arm-rest for seat 11C was faulty and couldn’t be lifted despite repeated attempts by your cabin crew. I have tetraplegia and had great difficulty transferring to the seat and vice versa when the flight landed at Bangkok.”

Because of the inconvenience, he had strained his arm and shoulder muscles while trying to lift himself over the arm-rest.

“I was made to wait for more than one hour inside the aircraft before I could disembark. An aisle chair was unavailable and my wheelchair was sent to the carousel despite it sporting two tags, indicating for it to be delivered to the aircraft.

“I use a highly customised wheelchair witha fitted cushion and wasn’t keen in using the standard airport wheelchair because the non-detachable arm-rest makes it difficult for me to transfer. Moreover, the latter would cause postural problems and was ill-fitted for me to position my legs and feet properly.

“When the aisle chair finally arrived, I again requested to have my wheelchair outside the aircraft. I was assured by your cabin crew it would be at the departure lounge instead.”

Much to his surprise and disappointment, despite repeated requests, his wheelchair that he expected to be outside the aircraft was at the carousel instead.

“Your cabin crew telling me my wheelchair would be brought to the departure lounge was to get me off the aircraft. I wonder if this is the standard practice of Malaysia Airlines when it comes to treating disabled passengers.

By the time he was transferred to the carousel, he was suffering from a backache because his posture was not properly supported.

“When my wheelchair was finally located, again, your ground staff had to get someone to help carry and transfer me.

“I was told that none of my requests was noted in the manifest. This was absolutely shocking when I had taken pains to inform all the staff who dealt with my needs during the entire chain of booking and checking-in.

“Stranding me for one hour inside the aircraft after it had landed is totally unacceptable for whatever reason. I had timed my arrival and journey to the venue to enable me to attend a particular session at the conference. Unfortunately, I had to miss the entire session due to this delay. It also threw my pre-arranged transportation to the venue into disarray.

“In the time I was stuck inside the aircraft, I could have gained valuable knowledge at the conference. Imagine yourself wasting one hour doing nothing and neither knowing what is happening nor when you are able to get out from a situation like that – and tell me whether this is tolerable by your standards or not.” 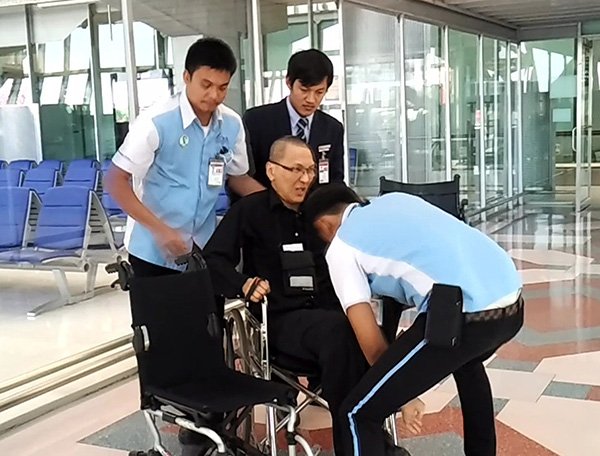 The man recalls a similar incident that happened back in 2016.

“I hadn’t complained then as I thought it would be a one-off incident. However, this has proven not to be so.

“I am sure you are aware of the dangers of carrying a passenger within the narrow confines of an aircraft. A trip or a misstep could send both the carriers and me tumbling down and cause severe injuries no matter how well-intentioned the act was.

“When the organiser of the conference asked which airline I preferred, I had requested without hesitation for Malaysia Airlines despite the earlier bad experience at Jakarta. I would love to continue supporting Malaysia Airlines but the incident at KLIA and again at Suvarnabhumi Airport has made me think twice about flying with Malaysia Airlines again.

“In comparison, I have flown Japan Airlines four times and the service was always seamless and impeccable without the need for repeated requests. Therefore, I am aghast that Malaysia’s flag carrier, once the pride of the nation, could dish out such poor service.”

He wishes MAS to acknowledge and apologise for their shortfall in service that has ’caused mental distress and physical suffering for me and my wife’.

“I am still troubled by backache and muscle ache from the incident.

“Malaysia Airlines should also reprimand and take action against all the staff involved for the lapse in service.

“In view of these incidents, it is high time for Malaysia Airlines to seriously look into reviewing and improving the booking process and support requests for disabled passengers, and ensure that facilities inside the aircrafts are functioning as they should.”

“In addition, all staff dealing with passengers must be professionally educated on disability equality and impressed to have true empathy for all passengers.

“Therefore, there is neither reason nor excuse for the national carrier to provide such poor service like the one I experienced.

“I trust immediate action will be taken and I look forward to a positive response from the airline.”