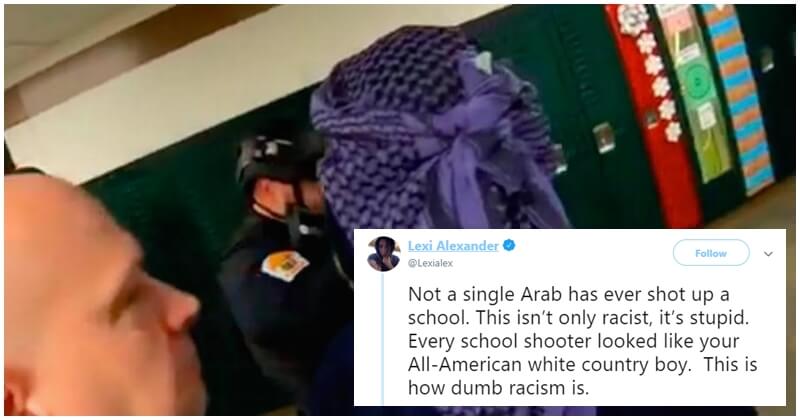 Cultural appropriation happens when a dominant culture takes things from another culture that is experiencing oppression, and this more often than not invites unwanted controversy.

In the case that took place in the United States, a simple shooting drill invited controversy when a teaching staff decided to don headwear that incited feelings of racism, discrimination and Islamophobia.

Taking to twitter, @ajplus shared an image of a teacher donning a purple Arabic headscarf as part of a shooting drill in Pennsylvania.

A Pennsylvania school district did a shooting safety drill with a teacher dressed in an Arab headscarf, or kaffiyeh.

It says it was part of a "costume" not meant to represent a specific culture.

The tweet writes, “A Pennsylvania school district did a shooting safety drill with a teacher dressed in an Arab headscarf, or kaffiyeh.”

“It says it was part of a ‘costume’ not meant to represent a specific culture.”

The drill, which took place at the Penn-Trafford School District caught the attention of many, with some going public in their condemnation of the teacher.

Not a single Arab has ever shot up a school. This isn’t only racist, it’s stupid. Every school shooter looked like your All-American white country boy. This is how dumb racism is. https://t.co/HvI6286S1O

Netizen @Lexialex took to twitter stating, “Not a single Arab has ever shot up a school.”

“This isn’t only racist, it’s stupid.”

“Every school shooter looked like you All-American white country boy. This is how dumb racism is.”

In her thread, she shared images of school shooters and mass murderers from the last few years – none of whom were Muslim or immigrants. 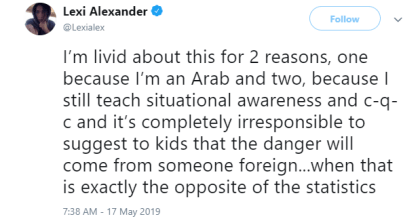 She adds, “I am livid for two reasons, one because I’m an Arab and two, because I still teach situational awareness and it’s completely irresponsible to suggest to kids that danger will come from someone foreign.”

“…when that is the exact opposite of the statistics.”

The tweet has garnered more than 16k retweets, and also drew comments from others who were appalled at the drill.

@callmeweird59 writes, “Funny how the costume just had to be an Arab garb. Cultural appropriation, racism and inaccuracy in one go.”

Another spoke of how different the response would be if the teacher were to dress differently. 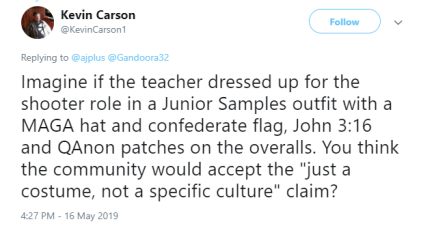 “Imagine if the teacher dressed up for the shooter role in a Junior Samples outfit with a MAGA hat and confederate flag, John 3:16 and QAnon patches on the overalls.”

“You think the community would accept the “just a costume, not a specific culture” claim?”

Clearly triggering backlash against the drill, the tweet caught on like wildfire with netizens condemning the appropriateness of the outfit worn by the teacher during the drill.

Not a day goes by without cultural appropriation or racism hitting the headlines, and this is certainly something that is not okay.

We believe that cultural appropriation or stereotyping based on race should not take place in any society, especially when it impacts disadvantaged minority cultures.