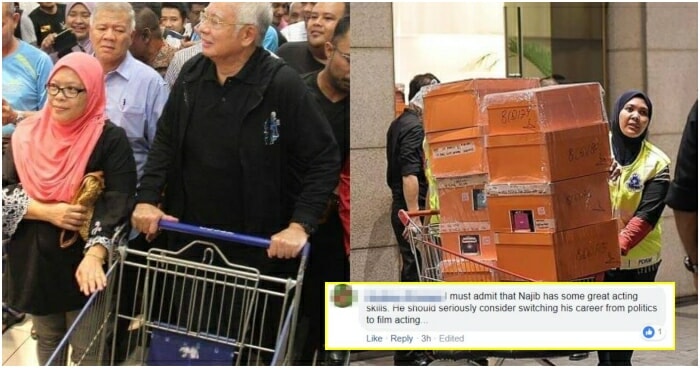 This won’t be the first time his words have come back to haunt him! Former Prime Minister and Pekan MP Najib Tun Razak recently drew mockery from netizens once again when he posted this picture of him shopping at a Tesco branch in Semenyih on February 14 (you can read more about that here).

The caption (roughly translated from BM) says: ‘Guys, I can confirm. RM50 is not enough to fill up a trolley. So, what now? What are we going to do with PH (Pakatan Harapan)?’

Netizens immediately jumped on the comments section, and boy was it colourful. There were the disappointed…

the ones in disbelief…

And the straight-up sarcastic: When you were PM, was the trolley full then? Or, are you just going shopping for the first time?

Nonetheless, the combined powers of the polarising caption, comments and shares made the post go viral (2,526 shares and counting). Now, a new post by Facebook page Najib Razak Must Go cropped up, mocking the RM50 trolley statement in a way no one else has done.

When translated from Malay, the caption reads:

‘In front of the people: Empty trolley

Behind the people: Full trolley’

The photo of the stacked trolley cart, which allegedly belongs to Najib, makes his own claims a lot less believable, if not downright ridiculous.

Of course, you already know that’s not the most entertaining part. Here are some of the most creative comments we dug up:

Whether the second post is telling the truth or otherwise, we can’t say we’re mad at it, especially when it makes scrolling through Facebook that much more amusing! We’d love to know what you think of this trolley fiasco; comment away below!

Also read: Najib Gets Mobbed By Fans at Tesco, Calls Himself a “Thief Who Steals the People’s Hearts” 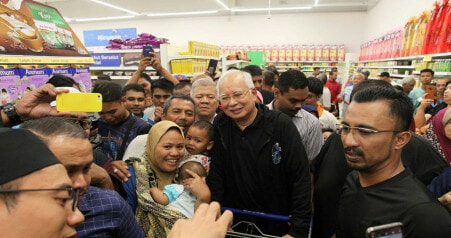