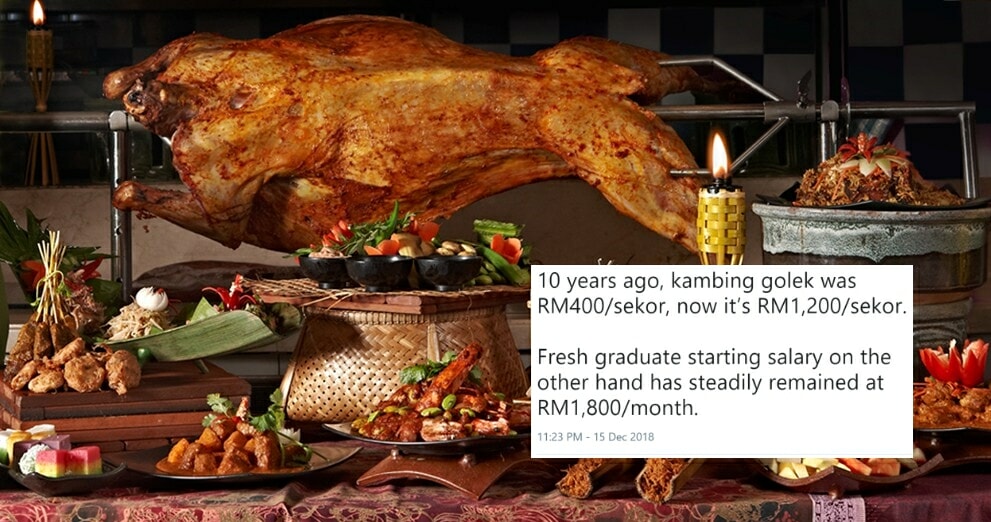 As you approach graduation and gear up to enter the workforce, you’ll probably agree that the most exciting part of it is earning your paycheck.

But building a stable future can take a backseat once that dream salary that you’ve had in mind may not be so sweet after all.

Disgruntled netizen @Inbarajs tweets on how salaries have remained the same while the price of kambing golek has tripled over the past 10 years. Valid concern!

Fresh graduate starting salary on the other hand has steadily remained at RM1,800/month.

“10 years ago, kambing golek was RM400/seekor, now it’s RM1200/seekor. Fresh graduate starting salary, on the other hand, has steadily remained at RM1,800/month.”

He said that the workforce of today is an ‘employer’s world’. He urged unemployed fresh graduates to take jobs relevant to their qualification and prove themselves first.

“Then you can command a higher pay.”

The tweet which has garnered over 3.3k retweets and 2.1k likes was well received by netizens with who a majority of them supporting the tweet.

“I started working 25 years ago at RM1500. Sad to see some things have remained stagnant. Now maids are earning more than fresh grads.”

Some, however, defended the decisions of the employers as to why a low starting salary was offered in the first place.

One shared her experience working with fresh graduates, giving a rare insight into what it’s like hiring one. 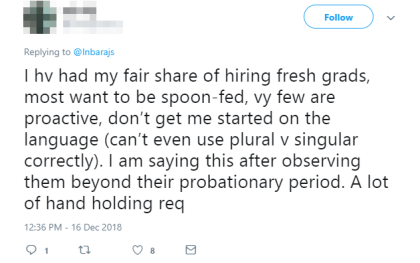 “I have had my fair share of hiring fresh graduates, most want to be spoon-fed, very few are proactive. Don’t get me started on the language (can’t even use plural and singular correctly. I am saying this after observing them beyond their probationary period. A lot of hand-holding required.”

With the minimum wage bill set to be raised to RM1,100 in 2019, shouldn’t fresh grads also get to see a similar increase in salary?

Share your thoughts with us in the comments section. 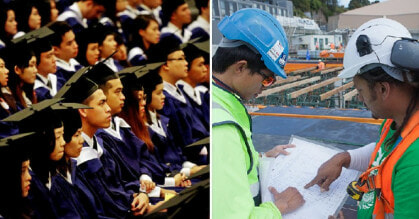