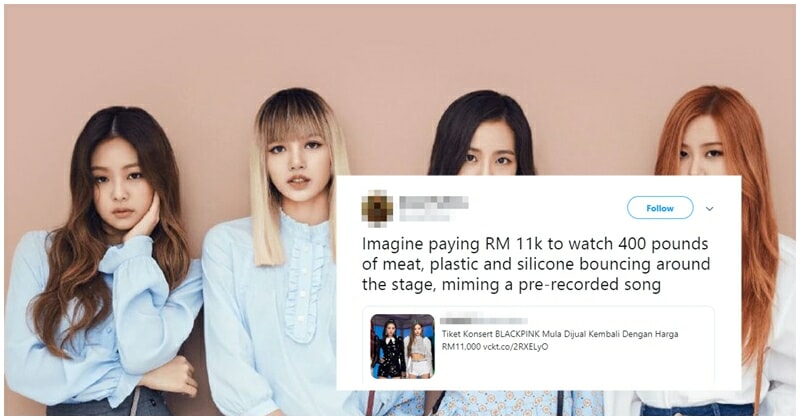 With catchy songs that feature extreme representations of male and female bravado with dance moves to kill, love it or hate it, K-Pop is here to stay.

Despite many not being able to understand a word of Korean, the genre has taken the world by storm.

You can bet Malaysia will not miss out on the K-wave or Hallyu culture too as we will be hosting one of Korea’s biggest K-pop girl groups – Black Pink.

Though some may not be familiar with the band, after hearing their catchy song makes you go ddu-du ddu-du, Malaysians are certainly clamouring for tickets for this opportunity.

However, not everyone shares the same enthusiasm, and one of them seems to take it a step too far.

Taking to Twitter, one netizen voiced his comments in response to the exuberant concert ticket prices on sale, which amounted to RM11,000 by a reseller! 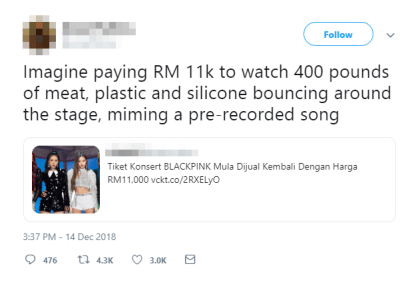 “Imagine paying RM11k to watch 400 pounds of meat, plastic and silicone bouncing around the stage, miming a pre-recorded song.”

And this certainly didn’t go down well with the K-pop fanatics. 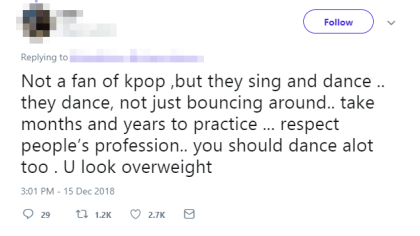 “Not a fan of K-pop, but they sing and dance. They dance, not just bounce around. (It) takes months and years to practice. Respect (other) people’s profession. You should dance a lot too. You look overweight.”

Another gave him a piece of her mind, stating facts related to the ticket prices as well as the group. 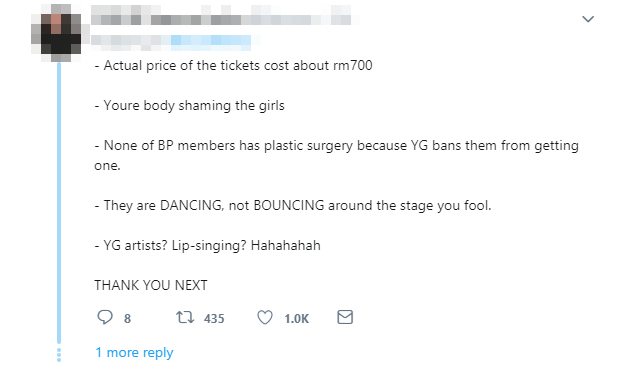 “Actual price of the tickets are about RM700. You’re body shaming the girls. None of the BP members has plastic surgery because YG bans them from getting one.”

One netizen said that the exorbitant prices were those set by resellers.

“But that RM11k is the price from the reseller. You know, like football match tickets. But I guess, you don’t want to read first.”

One netizen slammed the tweet for his ignorance and prejudice towards Korean artists.

“This is the mindset of the Malay. When they think of K-pop the first thing that comes to mind in silicone.”

Despite the tweet garnering thousands of retweets, comments made in response to the tweet are gaining similar traction.

A mental note: Never piss-off the K-pop crowd (or body shame anyone in the process). 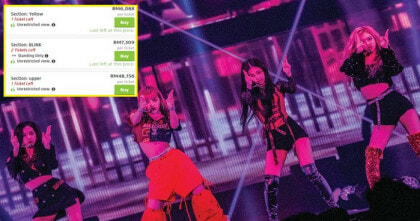