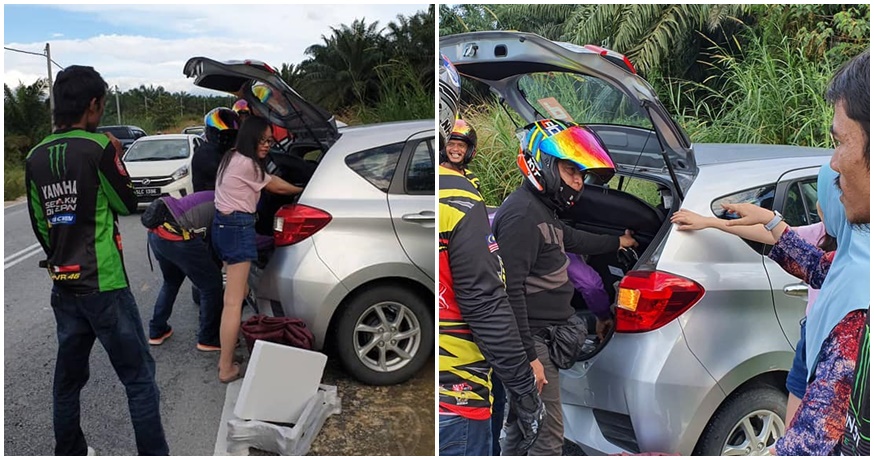 While we Malaysians may talk about unity between races a lot, sometimes this unity may be hard to see beyond National Day parades, the one day where we all come together and celebrate this harmony we carry with us as Malaysians.

But the truth of the matter is, our unity as Malaysians does extend beyond Hari Kebangsaan, as this Facebook post goes to show! 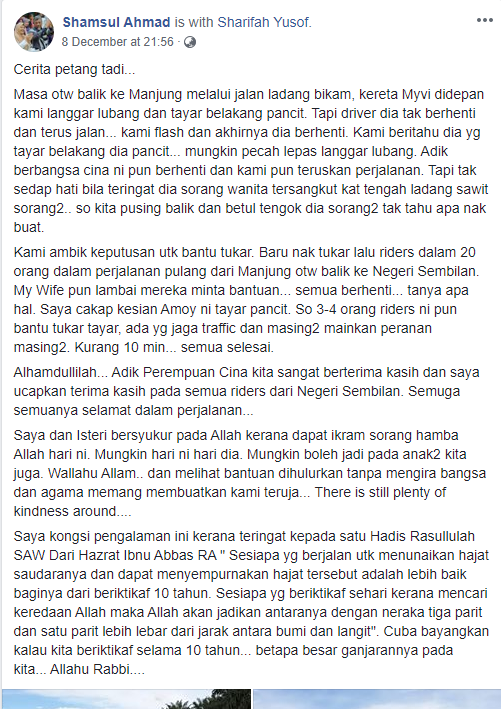 In an incident that recently happened along one of the old trunk roads that snake around the rural areas of Malaysia, a Chinese female driver who was behind the wheel of a Perodua Myvi ran over a pothole. Now, potholes like these aren’t unheard of, considering that these roads aren’t always properly maintained. 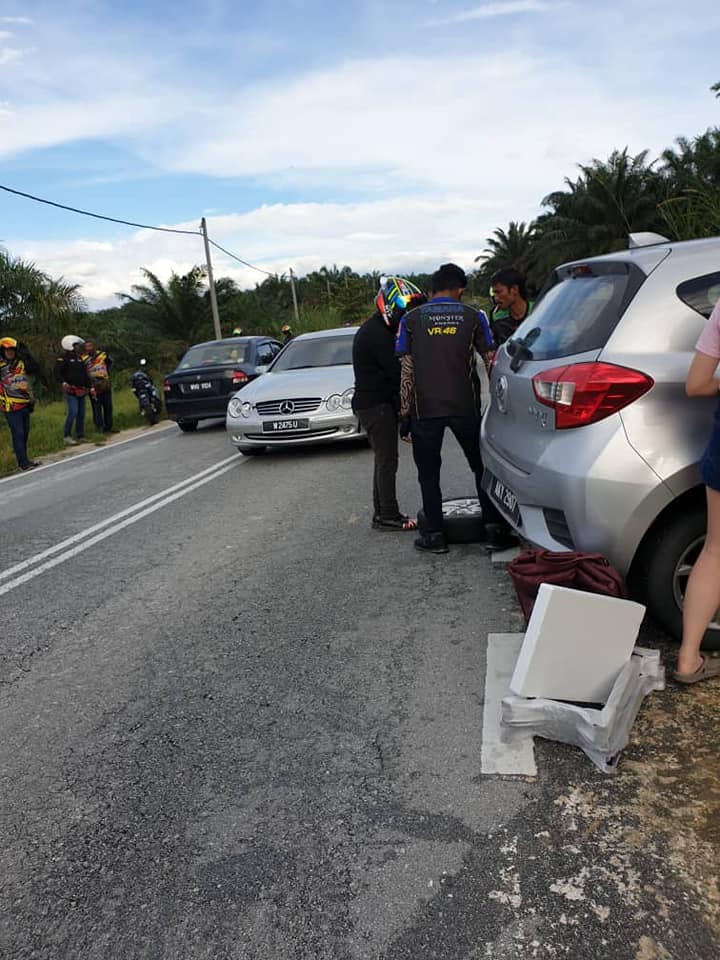 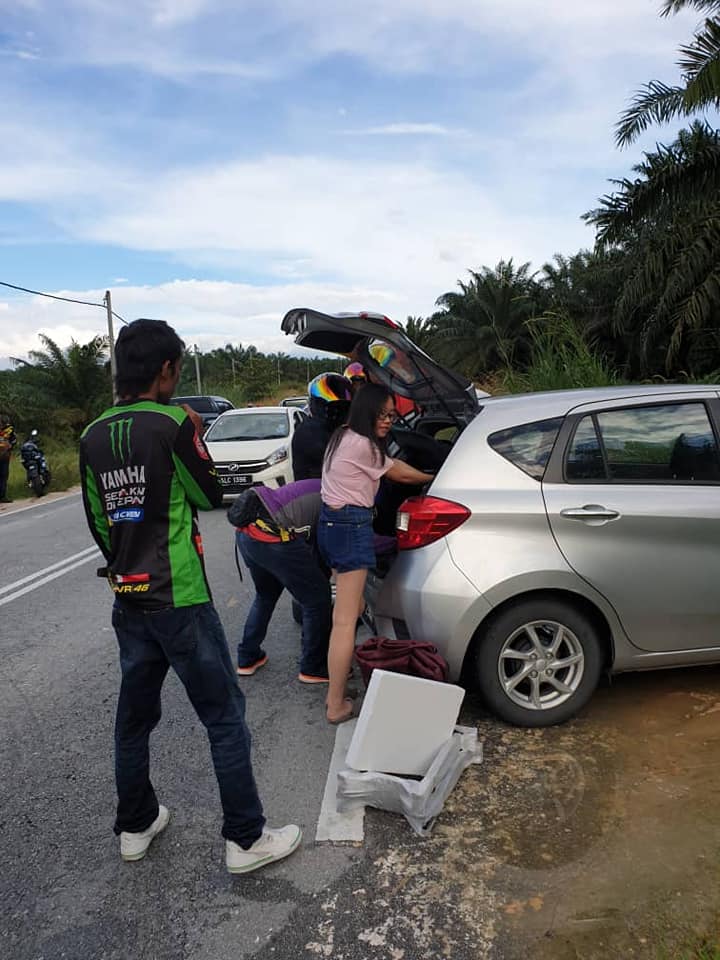 But as you can imagine, potholes can be pretty bad news for smaller cars like a Myvi, and one of the tires on her car suffered from a puncture, likely as a result of driving over the pothole. However, she remained oblivious and continued driving.

Thankfully in her case, a Malay driver who was driving along the same stretch of road noticed that her car tire had punctured and blinked their headlights at her, indicating that she should pull over. She did so, and they drove off promptly after.

“But we didn’t feel good about leaving a single woman alone on a road with a punctured tire, so we decided to turn back.

Just as we thought, she didn’t know what she should do and merely stood around her car.”

So they parked their car aside, and did what any good Samaritan would do in their position would do: help her change her flat tire.

But better still, a convoy of over 20 motorcyclists who were also riding along the same stretch of road from Manjung to Negeri Sembilan stopped to help them out too! Separating their duties, three to four of the riders helped her out with the female driver’s flat tire, while the others helped keep the flow of traffic smooth on the narrow road.

In less than 10 minutes, they managed to change her tire successfully, without obstructing traffic. The female driver thanked them profusely before they parted their separate ways.

This heartwarming tale has since gone viral over social media, showing how us Malaysians come together in the most unpredictable of circumstances and bond to help each other out in unquestioning unity.

Are you as proud as we are with being Malaysian? This story definitely has us feeling patriotic! 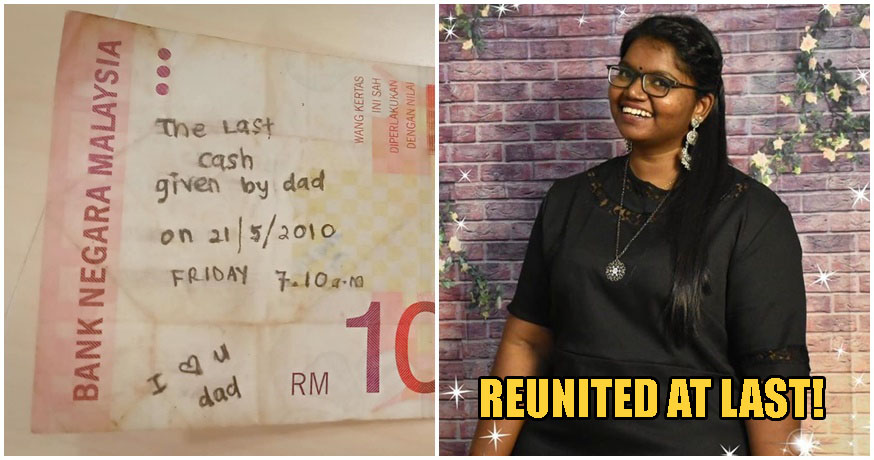