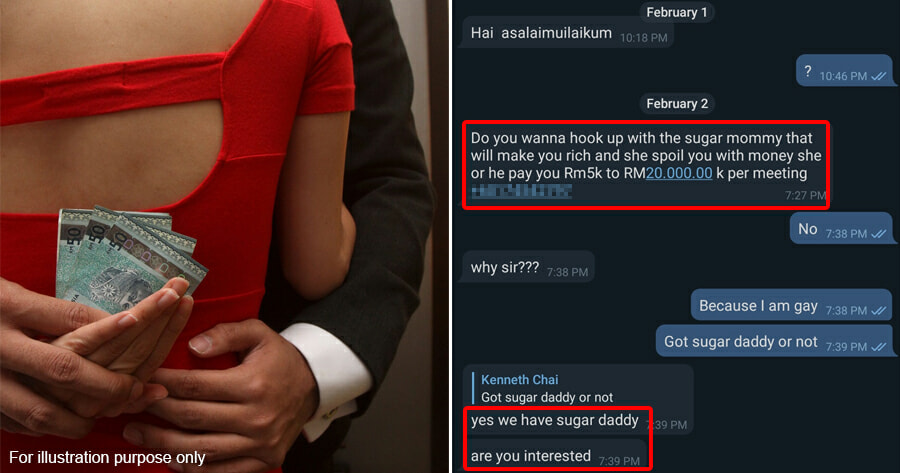 A Malaysian man took an alleged scammer on a wild goose chase by playing along with her attempts at cheating him for his money.

In a Twitter thread, Kenneth Chai from Kuching, Sarawak shared the conversation he had with ‘Lady Suzan’, seemingly an agent, who messaged him on Telegram on 1 February 2021.

“Do you wanna hook up with a sugar mommy that will make you rich and she’ll spoil you with money? She or he will pay you RM5,000 to RM20,000 per meeting,” Lady Suzan said.

Speaking to WORLD OF BUZZ, Kenneth said that this happened right after he jokingly tweeted that he was “considering being a Sugar Baby”.

“My telegram has no profile photo and it was right after I tweeted that I am considering being a sugar baby lol,” he told WORLD OF BUZZ.

If this shit continues I think I'll sign up for sugar mummy already.

Aware of what was happening, Kenneth decided to play along. He told her that he was “gay”, and said he wanted a sugar daddy instead. Immediately, Lady Suzan said that they had sugar daddies as well. 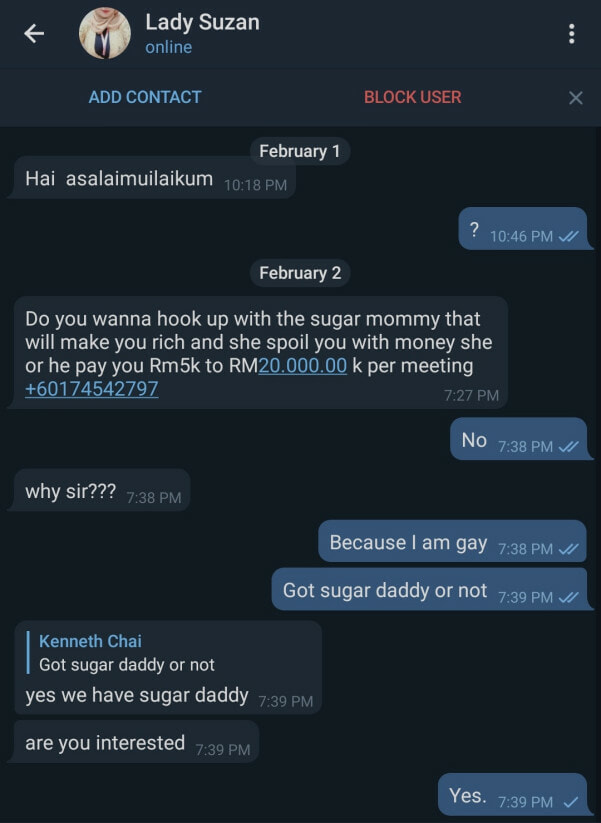 She then asked him to give her some of his personal details, including his occupation, location, and basic salary. She also told him that he has to pay the “registration fee” of RM200 before they make any “hookup arrangements” for him.

“With this job, your life will be better for good.” 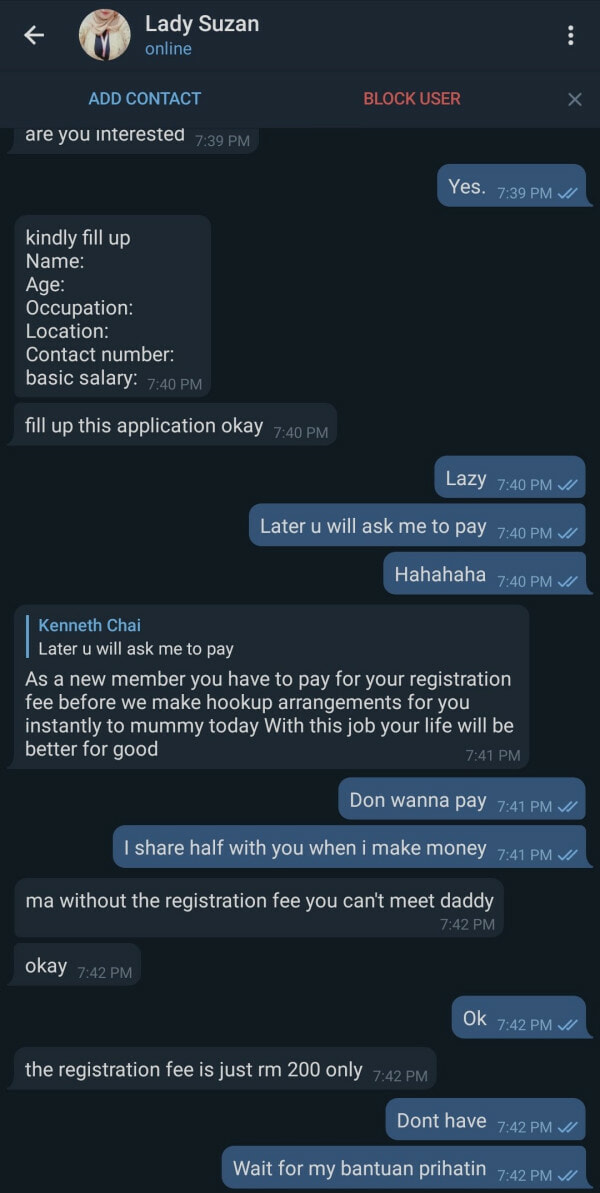 Lady Suzan then tried to bargain with him and even tried to help him out with the “registration fee”.

“Once you make the payment you will meet daddy immediately.”

“You can’t lose it. I promise you okay.” 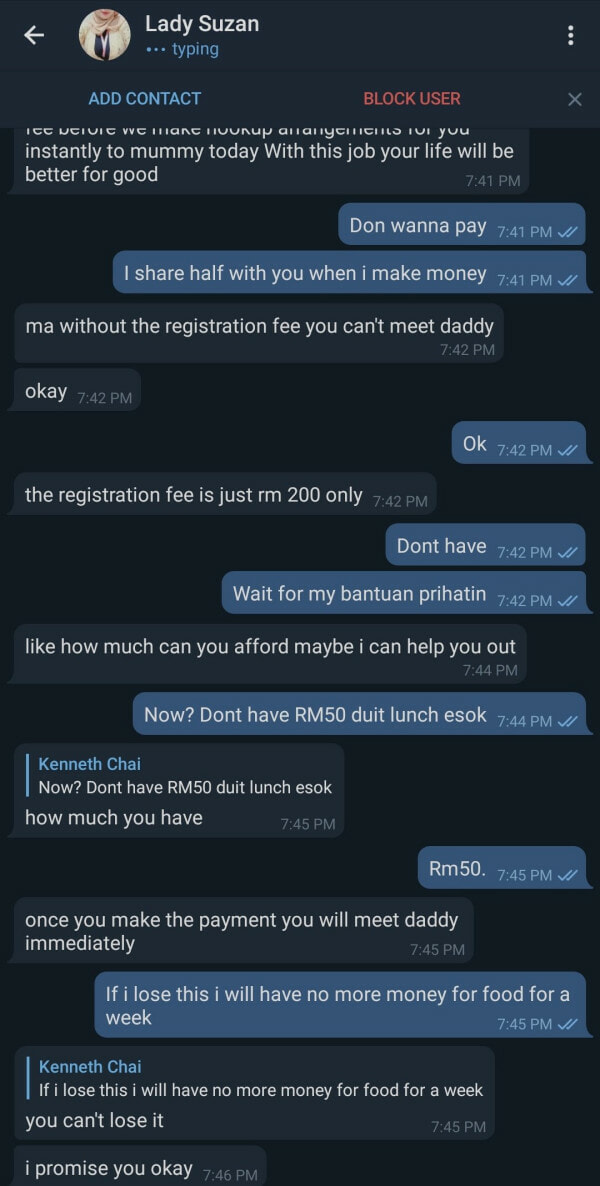 Kenneth continued to play along and told her that he will give her RM300 and asked for her bank number. She then sent him an account number under the name “Jayaseele”. Kenneth also asked for her IC number, but she sent him a photo of some sort of agency card that was “Govt Approved”, and said her name was “Amirah”, although she previously claimed her name was “Jayaseelee.”

Things started to get more suspicious when Lady Suzan didn’t even know what a “MyKad” was even though she claimed that she was Malaysian. 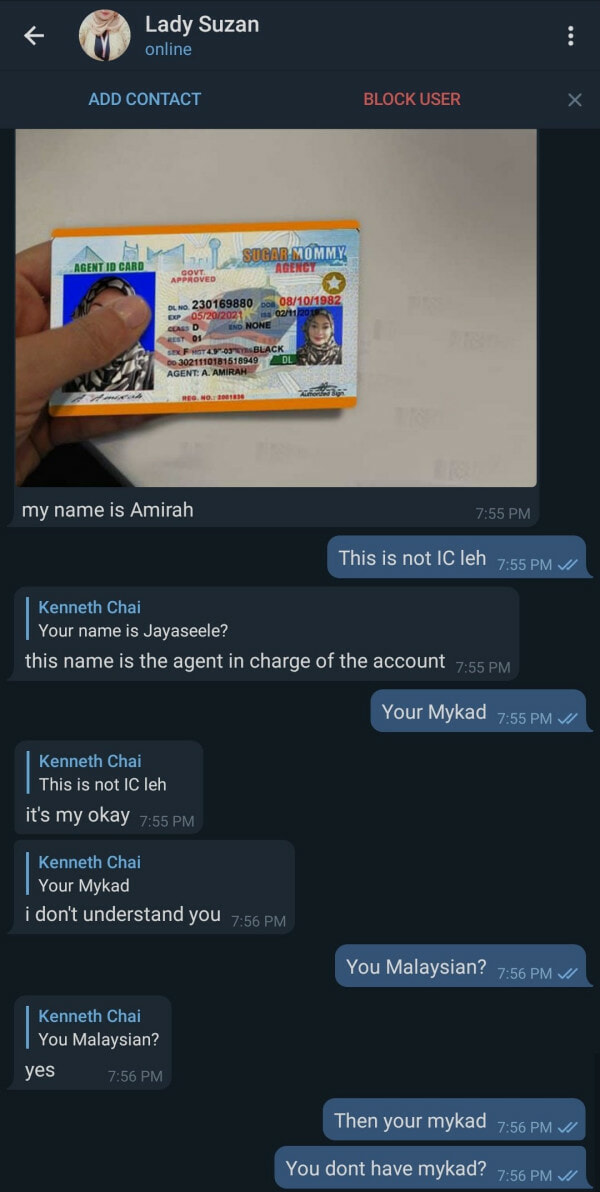 Without giving Kenneth proper answers to his questions, Lady Suzan tried to change the subject and told him that she needed to start the “process”.

“It’s correct, believe me okay. We are friends now. I can’t lie or cheat on your money okay,” she said.

Lady Suzan kept on pressing for Kenneth to make the payment and kept insisting that she was from Malaysia. She then randomly sent him a photo of a social visit pass to Sabah dated 27 November 2014.

Kenneth then tried to troll her further by requesting that they converse in Mandarin, which he told her was “the Malaysian official language.”

He even told her that MyKad was invented by “our Prime Minister Anwar Ibrahim last year”, and from the looks of it, Lady Suzan didn’t seem to realise that he had just given her inaccurate facts.

“I already told you that we don’t have a new one,” she said in Bahasa Melayu.

“If you want to make bank payments, do not ask many questions. We do not have time.”

To which Kenneth replied:

“Why you speak Indonesian to me? Are you Malaysian? Our official language is Mandarin.”

“Sounds fishy now. Can you speak our official language? Mandarin?”

Lady Suzan stopped replying after that and that was the last Kenneth saw of her.

This is one of the instances where scammers attempt to use creative and unsuspecting ways to lure potential victims into giving up their money. Fortunately, Kenneth was smart to not fall victim to her tricks.

If you ever come across random messages like this from strangers, please ignore them as most of them are probably fake. Or you can be like Kenneth and troll them!

Have you encountered an experience like this before? Let us know in the comments below! 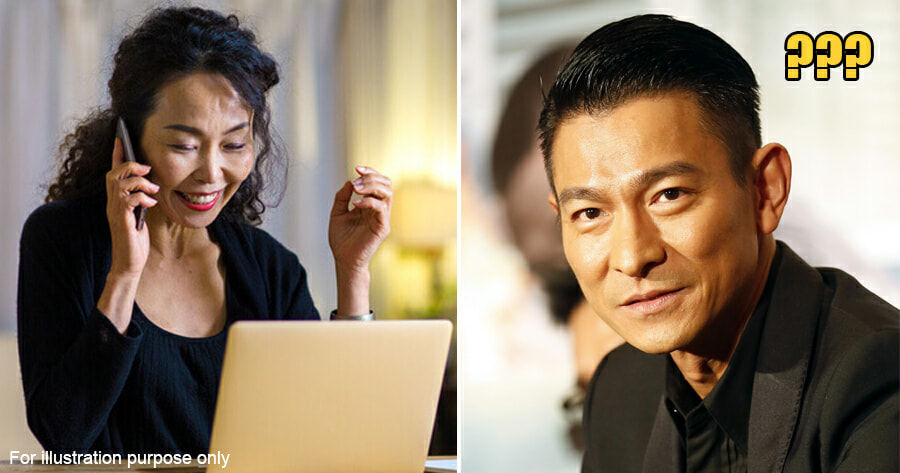