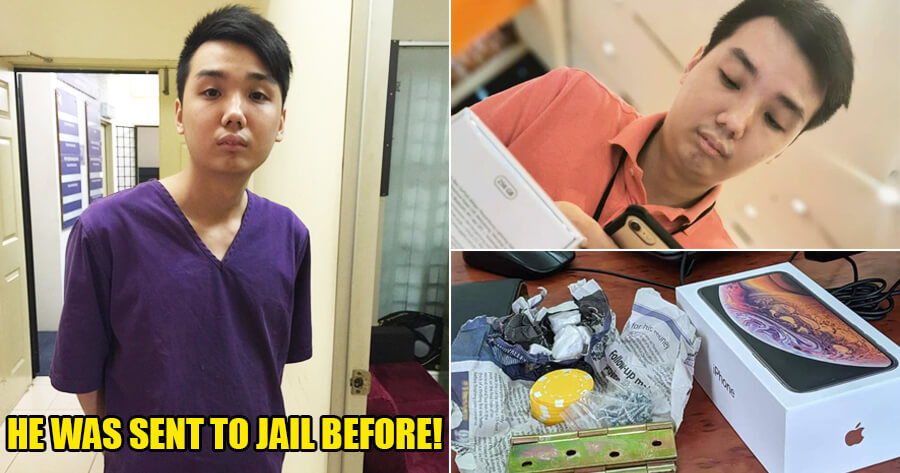 Just hours after posting about how he got scammed of RM9,000, Jin shared that many other victims also came forward with how they got scammed by this same guy as well.

In fact, some of them were able to identify the scammer and disclosed some information that makes us appalled at how this guy is still running free and cheating Malaysians of their money.

The scammer is identified as Lee Wai Kuen, who was caught before and actually sent to jail. The photo below shows him in the prison uniform. 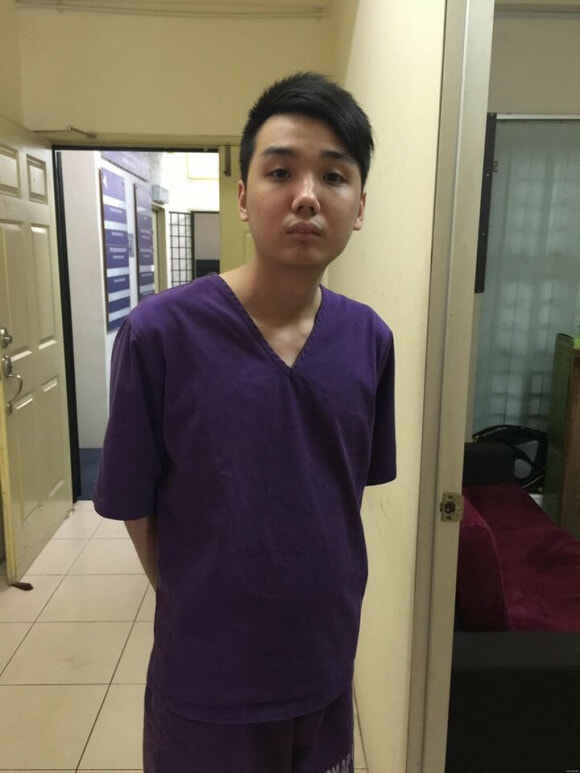 This new information was given by Nicholas, who said that he and another two victims had fallen for this man’s sly tricks and were scammed of about RM20,000 altogether.

Here are more details about the scammer:

The photo below shows a similar trick to the one the scammer used on Jin, who was given an iPhone box with nails and metal pieces inside. 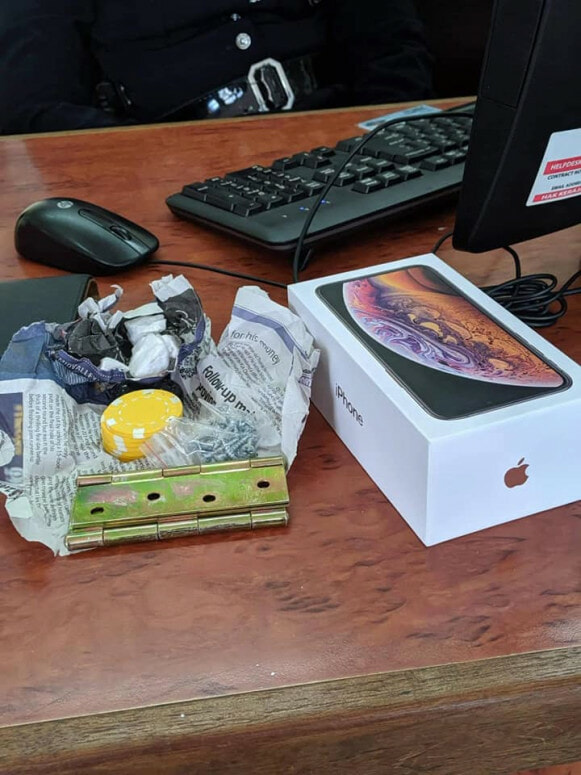 In Jin’s case, he shared on Facebook about how he got scammed of RM9,000 in six minutes on 24th September, and spent half the day at the police station sorting things out.

He shared that he saw an advertisement on a Malaysian-based online shopping platform for the sale of a Huawei P30 Pro at RM2,800, which is a much lower price than the market price. The advertisement was posted by Felix Tan, which Jin says is not the seller’s real name.

Jin contacted Felix and they agreed to meet at 2pm at Solaris, specifically at Starbucks (Block J). Not suspecting anything amiss, Jin went to meet him.

The scammer, a man in his late 20s to early 30s, brought a blue bag which had a sealed iPhone XS with the original seal which he said was for another ‘customer’. 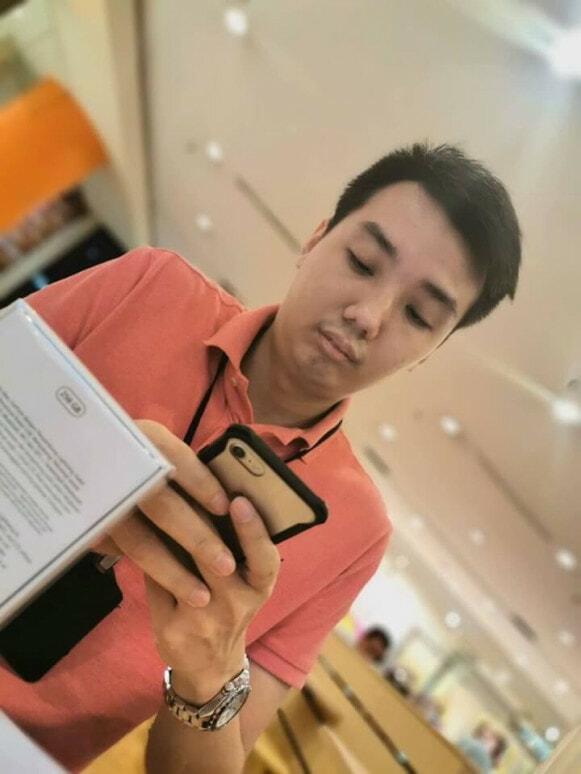 Felix told Jin that he would need to go to his office to get the HuaWei phone, and asked Jin for his credit card so he could process the payment. However, Jin refused and insisted that he follow Felix to do it on the spot.

“I refused, and insisted that I should follow him and do it on the spot,” Jin wrote.

“He said that his ‘boss’ wouldn’t allow bringing in ‘outsiders’ as he is purchasing this phone at a ‘staff discount’.”

Nevertheless, Felix convinced Jin to hand over his credit card, reassuring him that he would only take a short while. He even left the sealed iPhone XS and his credit card with Jin as he went to ‘process the payment’. 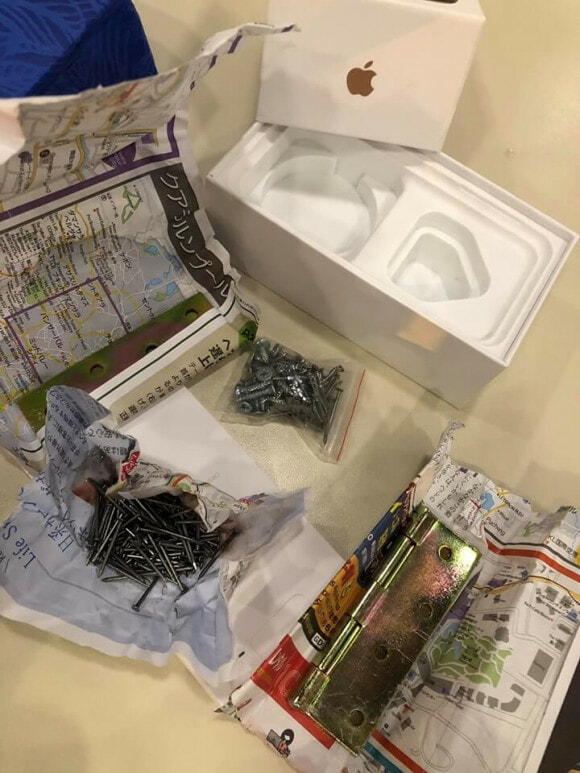 “With this, I gave him my credit card at 2.10pm. While ‘processing’ the payment, he said that he swiped the card and asked if I received an OTP code, which I didn’t receive,” Jin wrote.

“He then called me to ask if I could just give the pin to settle the payment ASAP (I was in a hurry to get back to work, I really did not think too much and I just wanted to settle it quickly).”

“This is a mistake on my side, and I know most of you would think how stupid it was to give your pin. Trust me, having gone through about 10 years in trading gadgets, I’m ultra careful with dealing on this, it’s either COD or nothing.”

“But in this case, bearing in mind I’m holding his customer’s iPhone and ‘his’ credit card, I felt secure enough at that point.”

Jin then relates that he received a notification from his bank at 2.14pm saying that RM1,500 was withdrawn from his credit card at the ATM.

At 2.15pm, Jin immediately called the bank to block his card, but the hotline brought him to press 1 for English and forced him to listen to a long notice on the latest bank charge, which took about a minute. 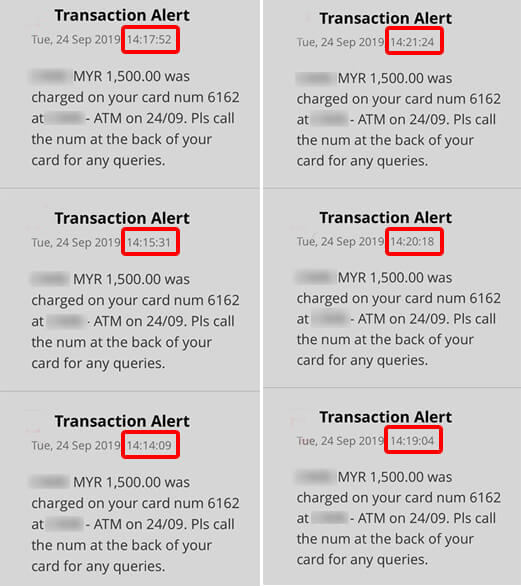 During this time, the bank is still bringing Jin through the whole “press 1 for this, press 2 for that” process until it finally reached “for reporting lost or stolen card, press 3”. This was at 2.18pm.

“Took a good 10 seconds when a customer representative answered the phone, gave her my details and told her to block my card immediately. As usual, they need to VERIFY YOU even when you’re panicking as sh*t!” 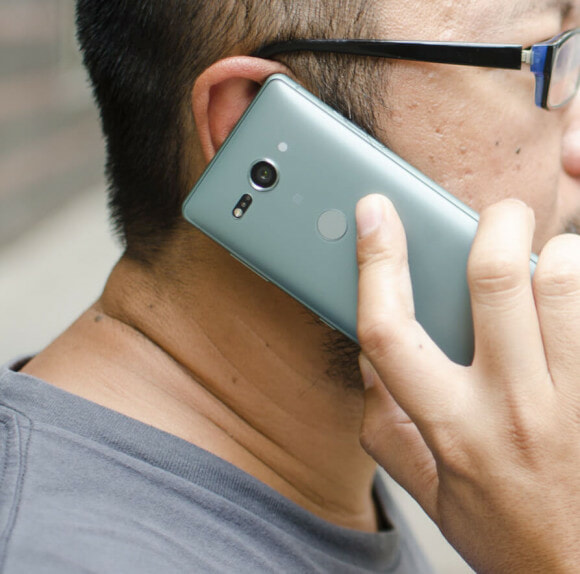 Altogether, six transactions were made in a span of about 5-6 minutes, most of which happened during Jin’s phone call with the bank.

“I’m writing this long post today not only to be aware of the latest modus operandi of scammers these days, but rather how INEFFICIENT AND SLOW the entire process is to BLOCK your card!” Jin wrote.

He then pointed out three things from the incident:

Jin was indeed scammed of his money, as the sealed iPhone package that Felix had left with him was filled with nails and a metal door hinge holder.

He also shared a photo from CCTV footage of the scammer that PDRM was able to find. 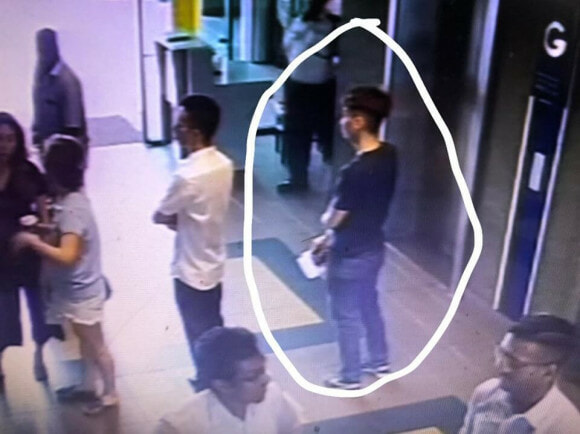 “I would like to thank PDRM for being very nice and understanding in this matter. Thank you. Note that, there’s nothing much PDRM can do even though they have footage of the scammer via the CCTV recordings,” Jin writes.

“Please inform your family, friends, and relatives regarding points 1 and 2 above. I would strongly advise you to disable withdrawals from your credit card.”

Scammers are getting pretty smart with how they trick people nowadays, which is why we need to be extra vigilant when our money is involved. 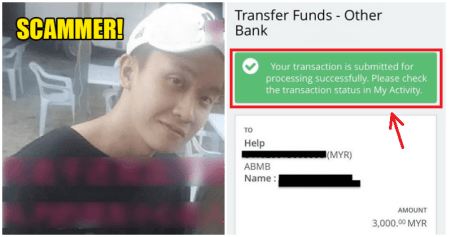