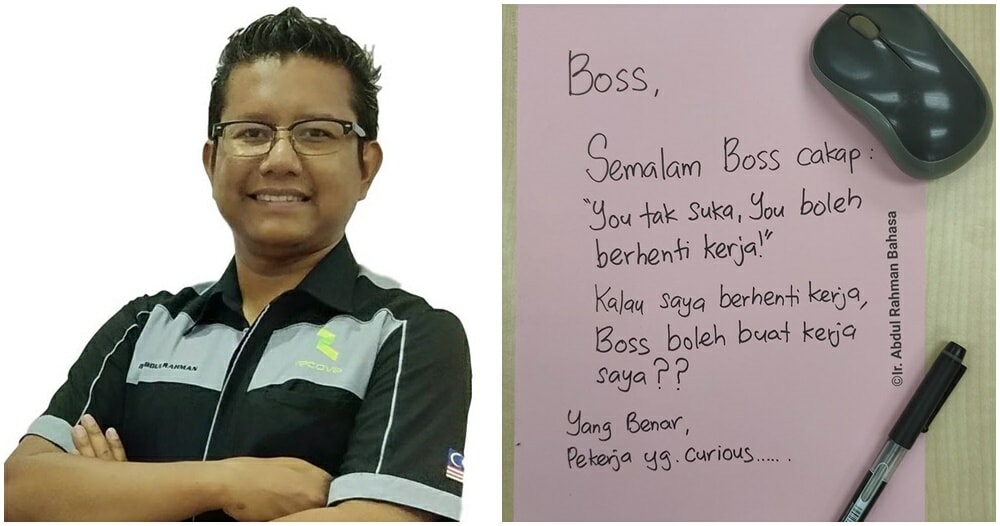 There have been plenty of debates on how fresh grads and new workforce employees are drastically underpaid upon entering the industry. While many are forced to bear the burden of working for several years before finally getting a decent wage, this engineer shared how he bumped up his pay by nearly RM800 by confronting his boss about it!

Recently, an engineer who goes by the name, Ir Abdul Rahman Bahasa, took to Facebook to share his experience of speaking up to his boss about how he should do a better job of appreciating his employees.

The engineer shared that he was initially given a job as a Project Engineer in Company X with a starting pay of RM1,800. While the offer letter he received was clear about his job scope, his workload started increasing after he worked with the company for almost a year.

“Even though my job is in engineering, I had to do PO, check for stocks at the warehouse, train the new staff. I even have to call the plumber when the site’s toilet is clogged,” said Abdul Rahman who added that he could only leave work at 10pm every day.

Deciding that he had enough, the engineer sent an email to his HR manager:

However, Abdul Rahman received an email response from the Managing Director himself:

But the netizen wasn’t satisfied with a mere RM200 increment. “What?? Just RM200 only while my workload now requires an additional four hours a day (50%) on top of the average eight hours I work. He should at least increase my pay by 50% (RM900).” Abdul Rahman boldly replied the email his boss sent:

Unfortunately, his boss didn’t take too kindly to his request:

That’s when Abdul Rahman drew the line. He proceeded to school his boss on the exact timeline it would take for the company to find a new candidate and even received support from his HR manager! 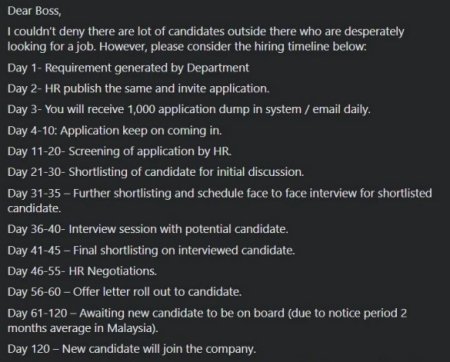 After receiving that email, Abdul Rahman’s salary was raised to RM2,600 from his initial income of RM1,800. While he didn’t receive his requested raise of RM900, he still took it as a win. He even added that his boss “toned it down a little (maybe my hiring timeline made an impact on him)”.

Nonetheless, he left the company not long after that to find a job that pays better. The courageous netizen ended his post with this piece of advice:

“For all employers out there, don’t be so arrogant. Sometimes, threatening your employees will do you no good. In fact, it could make things worse. It’s better to have a civilised discussion than threaten.”

Looks like speaking up for what you deserve does work! Would you guys try this with your boss?

Also read: Boss Forcing You To Work This 8th June? Here’s What You’re Entitled To