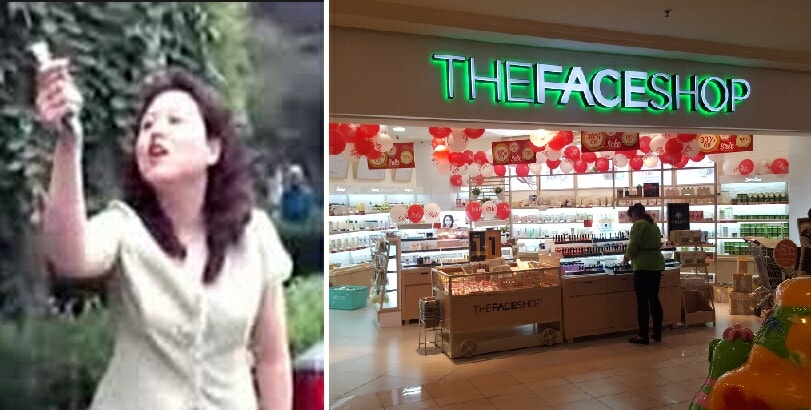 *Featured image of woman is for illustration purposes only

I dropped by Midvalley this afternoon to have lunch with my boyfriend who works there. After lunch, we went to The Face Shop because I wanted to buy nailpolish.

Being like any other girl, I tried some testers on my fingernails before making an actual purchase. While trying on the testers, I noticed that the tester bottles were not arranged nicely and was randomly scattered around (example, purple tester was infront of the brown bottle, white tester infront of the pink bottle etc). I didn’t think too much of it since I just wanted to buy a white colour one. Testers are not arranged according to colours

I tested the white nailpolish on my pinky finger and it looked fine, so I bought it. Like i said, the testers were not arranged accordingly so I just searched for the white bottle among all the other bottles. I found it, pick it out, and then went to the cashier to pay.

My boyfriend and I wandered around for a bit, before sitting down on a bench.

I thought to myself, “might as well spend the free time painting my nails first”.

I took out my newly bought nailpolish and painted my left thumb nail. To my surprise, it wasn’t white at all! It was almost transparent colour!

Maybe I didn’t shake it properly, so I vigorously shook the bottle again like a bartender. Shake shake shake~ I applied the colour to my index fingernail but it was still transparent! 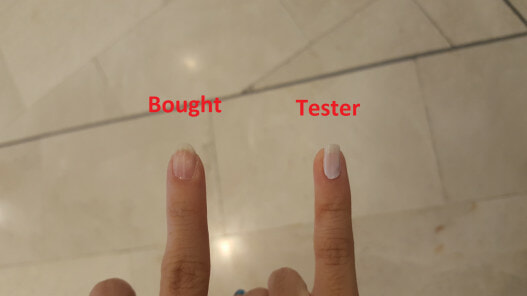 Aiyooo, the bottle I bought is almost transparent colour. Might as well don’t buy!

I immediately went back to the shop and told the sales person that I bought a different white one and wanted to change to the correct white colour. But she told me I can’t.

Mind you, the tester and the one i bought looked exactly the same. Left: Tester. Right with sticker: Mine

I was shocked and appalled at The Face Shop for their lack of help. I thought, “What the heck? Not like they lose business also. Some more don’t tell me they expect me to buy another one.”

I asked her again, “Is there no way to change it? The bottles look exactly the same!”

She said, “I’m sorry, no. It’s the store policy. After you pay for your item, the item number is registered in the system and you can not change it anymore.”

We were a little flustered at this stupid situation. I bought the nail polish for less than 10 minutes, and they look exactly the same, but the shop is not willing to exchange for me! Plus, I’m not even asking for my money back.

I went to talk to the manager about what happened, but before I can tell the full story, she quickly said, “Sorry miss. We can not change for you.”

I was upset at the silly issue and asked the manager, “Why can’t I change it? Look at these two bottles, you tell me same or not? The whole thing looks EXACTLY the same.”

She replied, “Yeah, it looks the same. But that’s why you need to check the code first before you buy. One is white, the other one is milk colour.”

We were flabbergasted. I argued telling her that, “How would I know there’s TWO bottles that look exactly the same? Any customer see also will think it’s the same one. Don’t tell me I have to check the code every time I want to buy something.”

I added that the nailpolish section is a mess, that’s why it was very misleading and anyone who wanted to buy white colour would have easily bought the wrong one.

She kept saying, “Sorry but I cannot do anything.”. and similarly said, “It’s the store policy. Your item number is registered in the system already so I can not change it anymore.”

Without any solution, we gave up. But before we left, we told her that we want to take a picture of the two products. To warn people that it looks exactly the same and it’s very easy to mistakenly buy it (without any exchange).

When my boyfriend took out his phone, the manager quickly took the tester and hide it behind the cash register.

She appeared to be a bit scared and asked, “What are you doing?”

“Taking a picture of the two bottles.”

“To compare. See both bottles exactly the same or not.”

She reluctantly gave us the tester. She then said, “You cannot take the picture of the two bottles together. If you want to take, then just take the tester only.”

We argued that take now or take later when we go home is the same. So why was she so scared of letting us take the picture now?

She seem to resist a bit but end up letting us take the pictures.

Note: The one with a sticker on the bottle cap is the one i purchased. 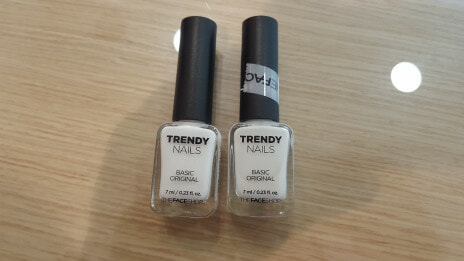 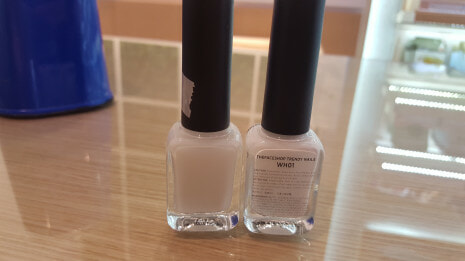 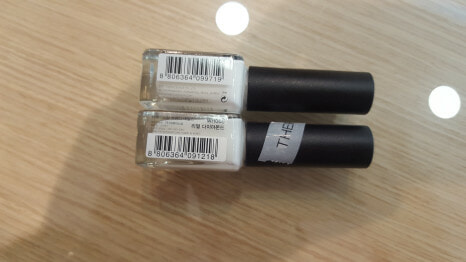 I am shocked that the service in The Face Shop is so terrible! A simple exchange for the right product was apparently impossible for this shop for their misleading packaging.

Some might think this is a small issue, but what happened was very unreasonable, even if only a little money was involved.

I guess it serves as a warning for all. The next time you want to buy something, always assume that there are two similar products and then check gao gao that it’s the correct one before you buy.

Also, now I got a nailpolish I don’t want. Anyone looking for a near transparent nailpolish? Lai lai PM me. #giveaway

** EDIT: The Face Shop has since contacted the writer of this post to resolve the issue.