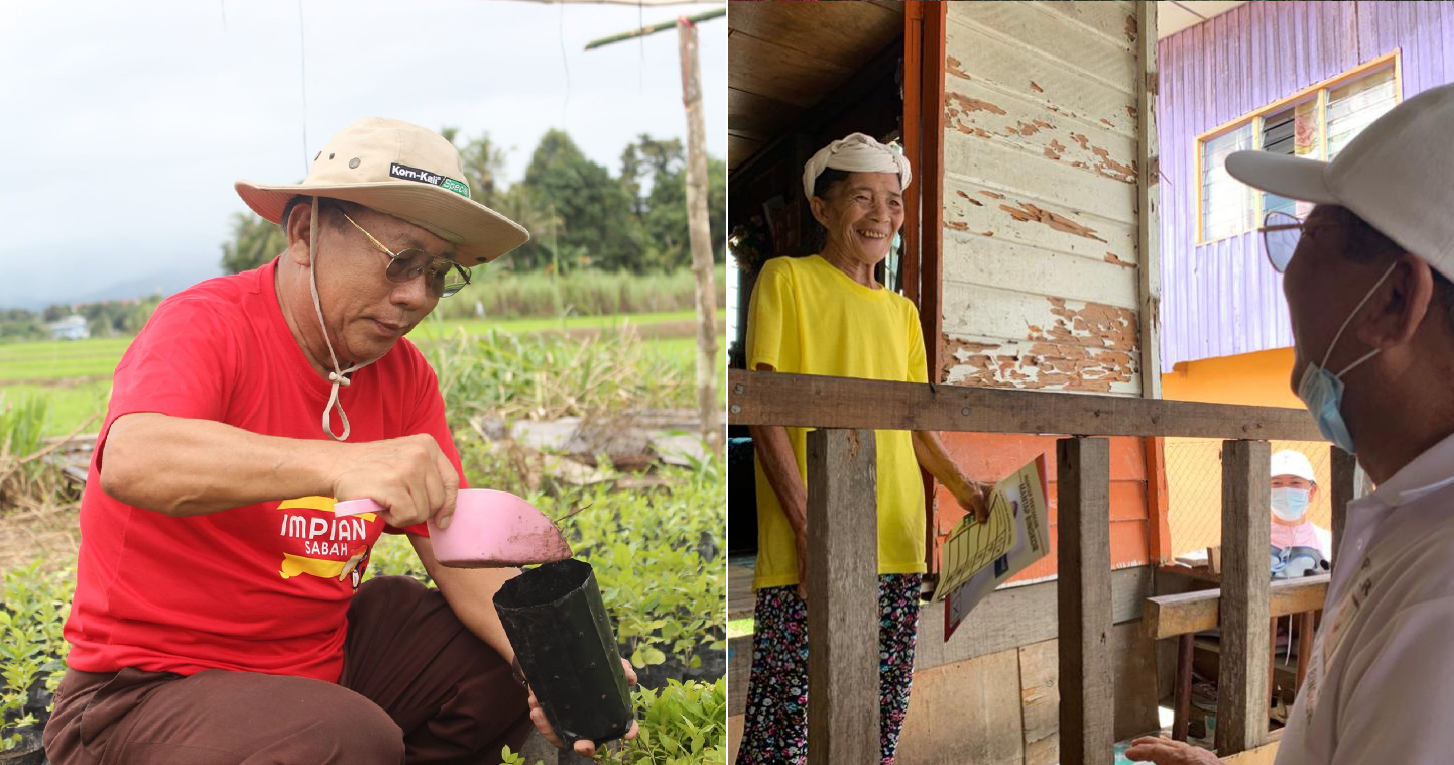 The unassuming villages in Bingkor, part of the Keningau district of Sabah is far different from any places found in Peninsular Malaysia. Despite its fairly small population of around 173,000, Keningau held a significant role in the formation of Malaysia.

You see, when the Malaysian Agreement 1963 (MA63) which formed our country was signed, a commemorative monument was erected here one year later. Known as the ‘Batu Sumpah Keningau’ or the Keningau Oath Stone, the rights of Sabahans guaranteed under MA63 were carved onto the stone. Specifically, these 3 rights were forever engraved:

Walking through the area, one could definitely see the first right in action. Mostly populated by Christians, Bingkor and the larger area of Keningau is home to devout followers of the religion. The chapel and church communities strive. 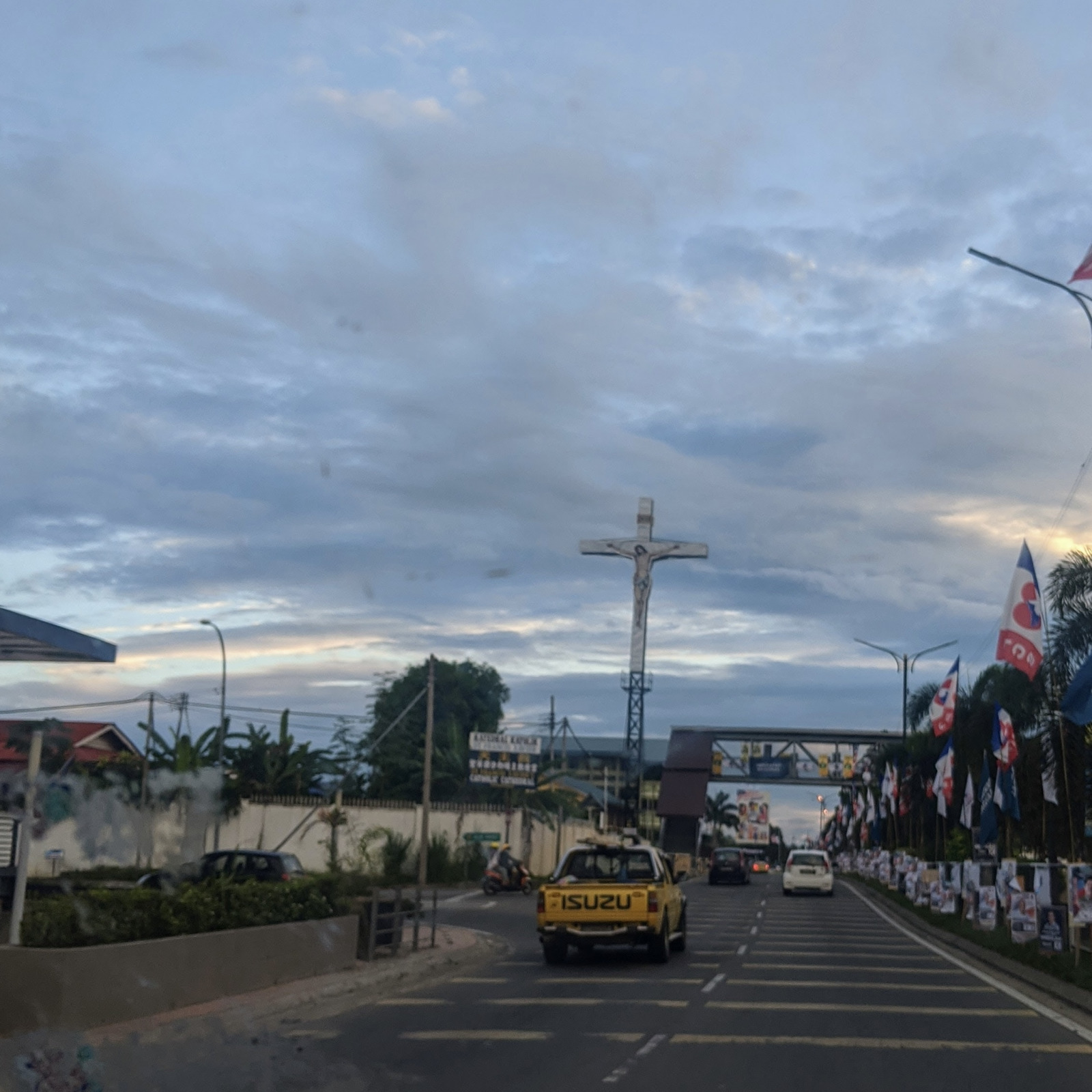 A huge cross in front of a school in keningau, sabah

There is even a huge cross – a holy symbol of Christianity – in front of a school in Keningau and another massive one visible on top of a hill in the surrounding Crocker Range.

While such monuments may cause divisiveness in Semenanjung, it is part and parcel of life in Sabah. When there are prayers at the mosque, the villagers will pause any events until it is over as a sign of respect. For it doesn’t matter what religion you practice or which ethnicity you belong to, Sabahans respect each other and live harmoniously together. The Malaysian dream.

The Batu Sumpah Keningau is a proud treasure of the locals here. It is now safely kept by the government after it was vandalised and even stolen before. 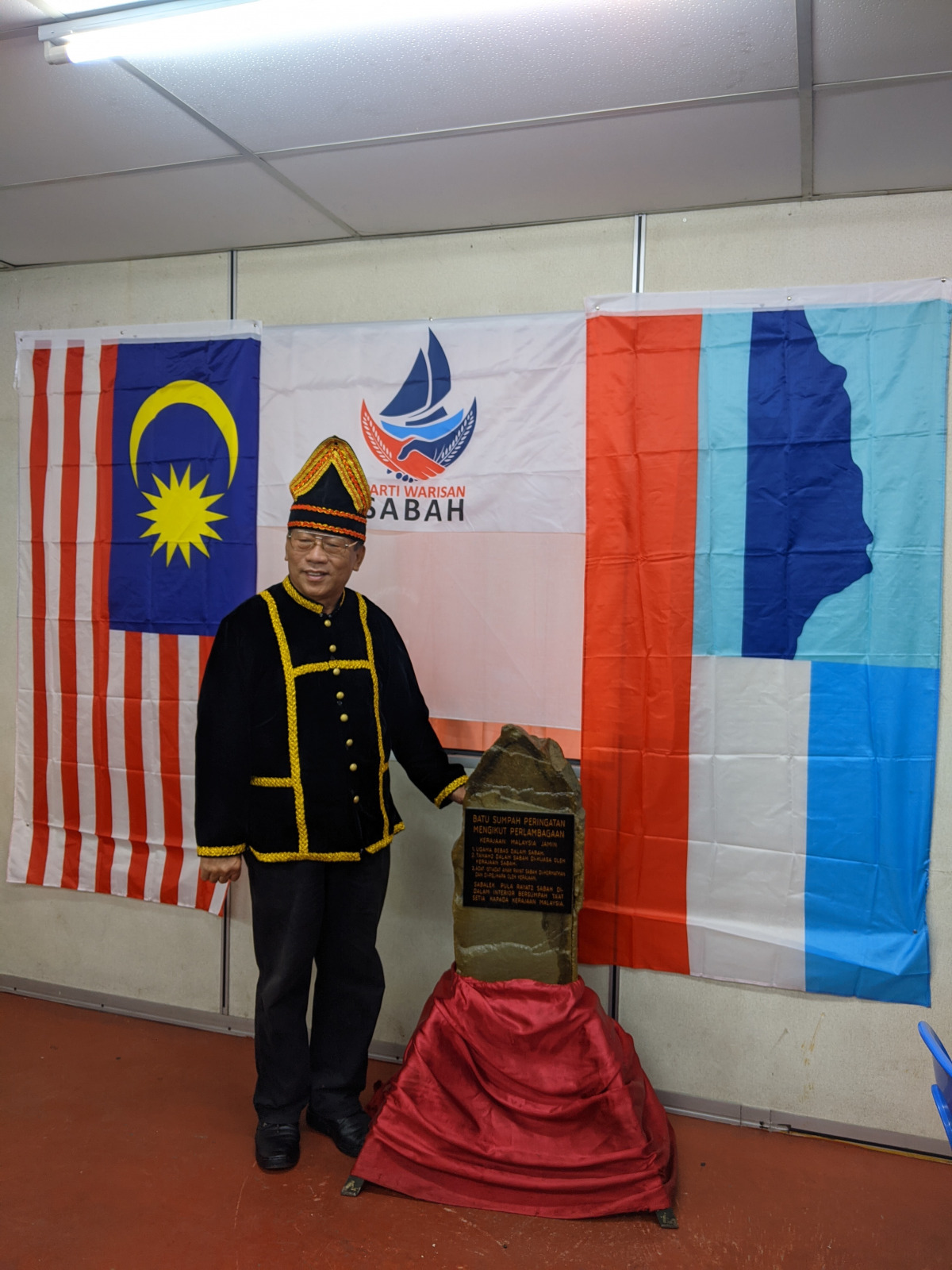 Peter saili with the replica in his office

In fact, one local resident is in love with what the monument represents so much, he keeps a replica of the Batu Sumpah inside his office. Peter Saili, a proud Keningau son and community leader, headed the making of the replica back in 2014 and it now sits proudly at his office in Lorong Mat Salleh 1A, Keningau.

Peter was 13-years-old when Sabah, then known as the British Empire’s North Borneo gained independence and subsequently joined Sarawak, Malaya and Singapore to form our beloved country. Although Singapore has since left us, Malaysia continue to flourish and Sabah played a big part in that. 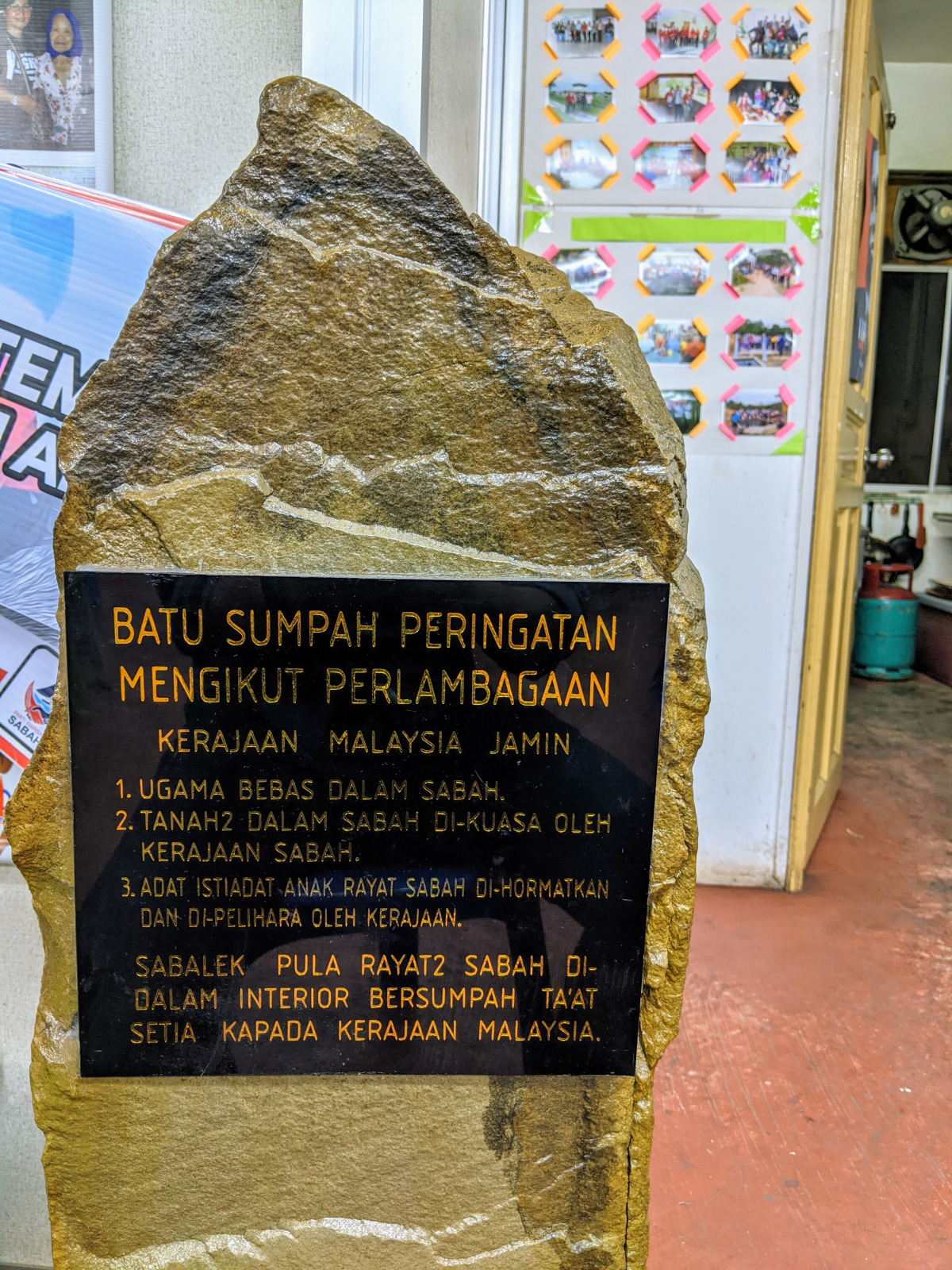 Ever since 1974, however, most of the rights of Sabah and Sarawak under MA63 has been denied by the Federal Government. It’s fair to say that many of us from Semenanjung are not aware of this.

“The Batu Sumpah is put at my office in the community centre as a reminder for myself and my team of the importance of fighting for the rights of Sabahans,” said Peter.

The importance of agriculture to Bingkor 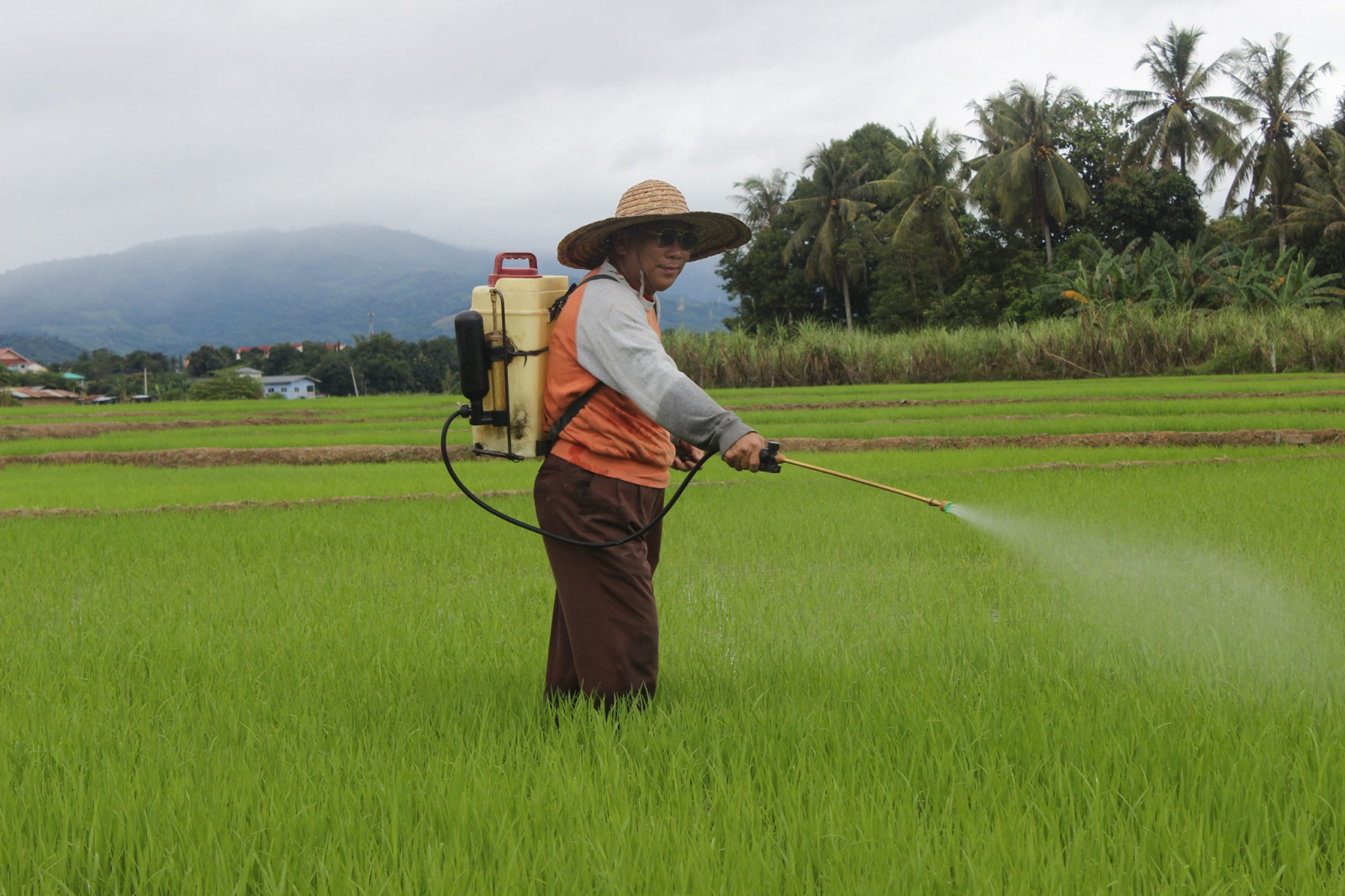 The rights of Sabahans under MA63 is not the only thing Peter has been fighting for in his hometown of Bingkor. The lush greeneries of Keningau surrounded by the mountains of Crocker Range not only make for a gorgeous, spectacular view but its fertile soil is the main source of income for the district.

Just like almost 70% of the population here, Peter Saili is also a farmer.

“I am a farmer. I’ve never worked for the government or in the private sector. I inherited the farming profession from my family. During my childhood, I always followed my father, who was also an agriculture officer from one kampung to another. I know that agriculture needs good policies for farmers to succeed.”

Peter Saili iterated that the reason he became active in the community was for the empowerment of the farmers here. His team has introduced many free workshops on modern agriculture techniques over the years. 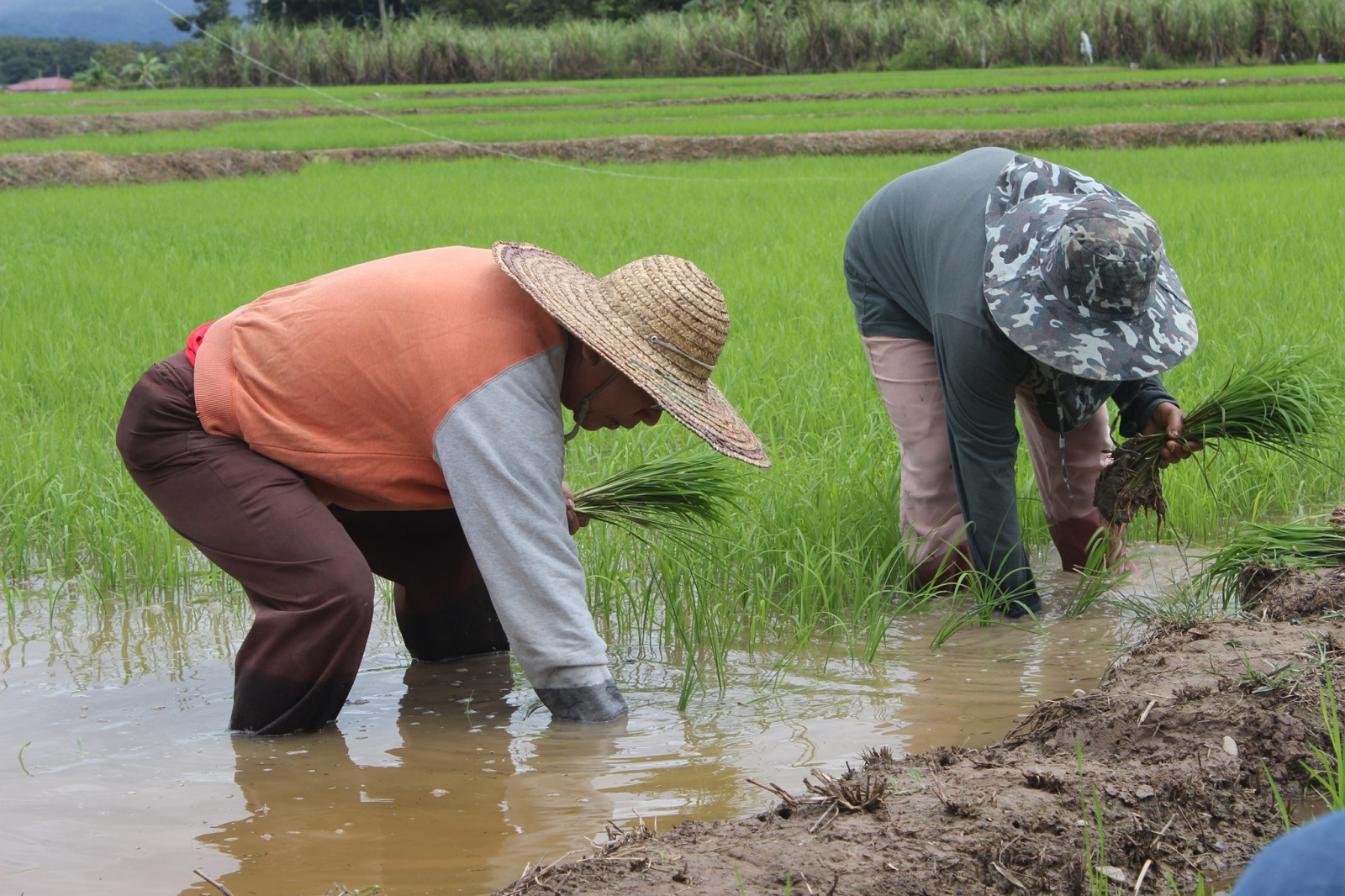 Recently, he has also came up with an initiative of giving up to 10,000 plant seeds of coffee, durian, pandan coconut and more. This was to encourage local farmers to be more independent and diversify their crops.

Safeguarding the welfare of women in Bingkor 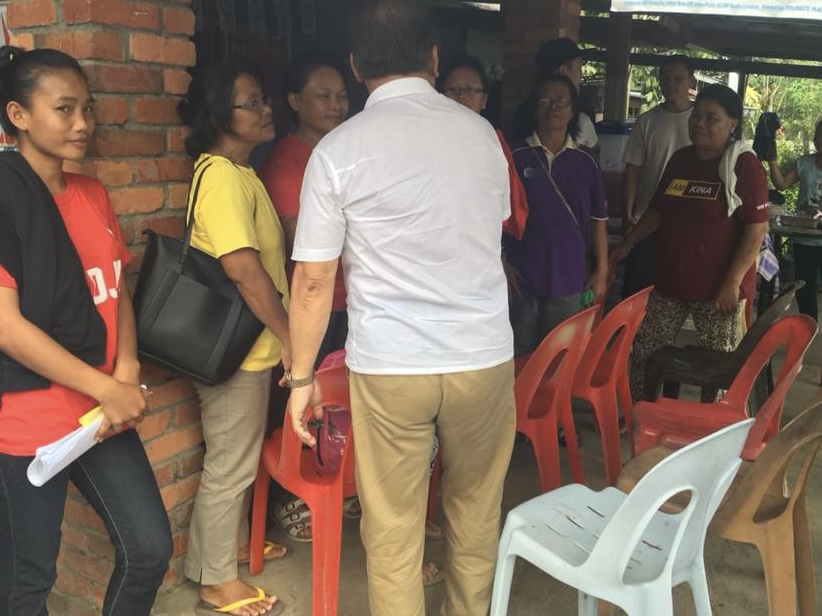 However, given the reliance of Bingkor towards agriculture, it means that most lives with a non-fixed monthly income. Worse, most haven’t even set up an EPF account for retirement.

These farmers are also dominantly men. The women of Bingkor, especially the older generation, are without any income and depend solely on their husbands. If anything were to happen to their spouses, these housewives’ lives would be turned upside down; without any jobs, income and having to take care of their children alone.

Peter recalled of the experiences of his siblings,

“I’m from a big family, I have 8 siblings and 7 of them are women. They held huge responsibilities within our family and in their respective families after they got married. As housewives, women helped out in the fields, they take care of the children and the elderly. This is common experience among the women of Bingkor,” 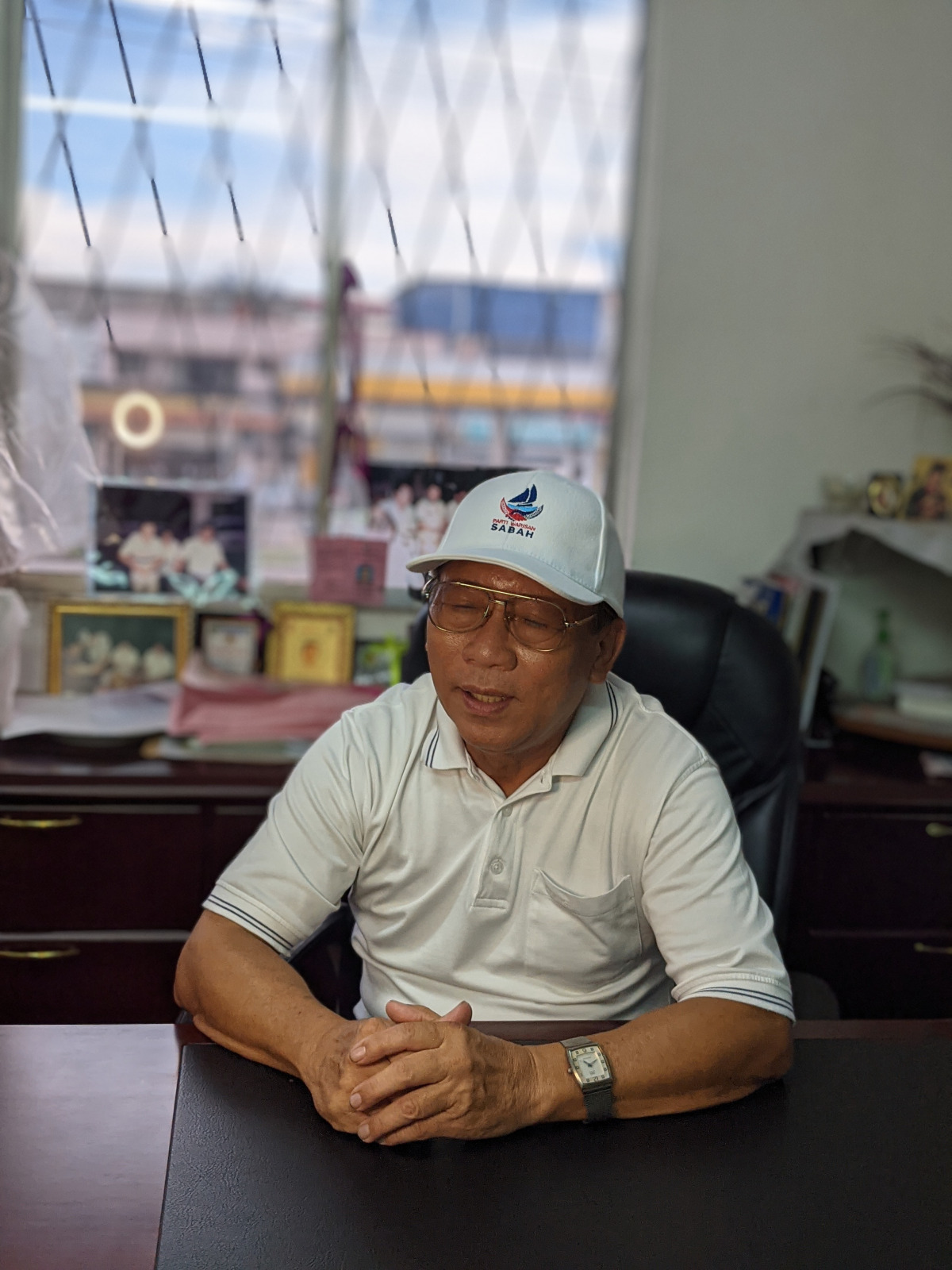 That’s why Peter is personally invested in taking care of the welfare and empower the women of his hometown. Ever since the government introduced the EPF i-Suri and i-Saraan account for housewives back in 2018, he has helped set out accounts for eligible women throughout Bingkor and Keningau.

If these women didn’t have EPF accounts, he would be setting up accounts in investment funds such as Amanah Saham Nasional Berhad (ASNB) and more. As such was to make sure that they could get dividents and have some savings to rely on during emergencies and when they’re old.

In fact, Peter Saili has been using his own money – the whole monthly allowance that he received for being a member of a Cocoa Board – to contribute towards all of these women’s accounts each month since 2018! A very selfless and commendable act.

Currently, Peter is also hard at work to set up funds for the young women of Bingkor who needs financial assistance to further their studies. Furthermore, his team is also on track to encourage and train women in agriculture through various programmes. 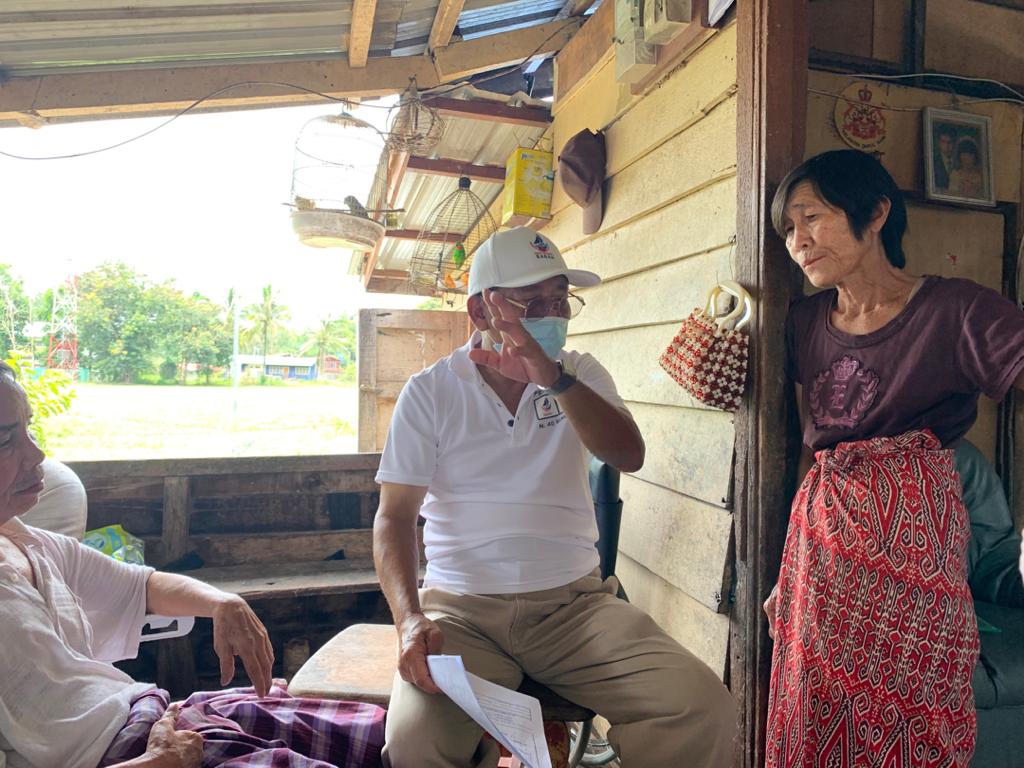 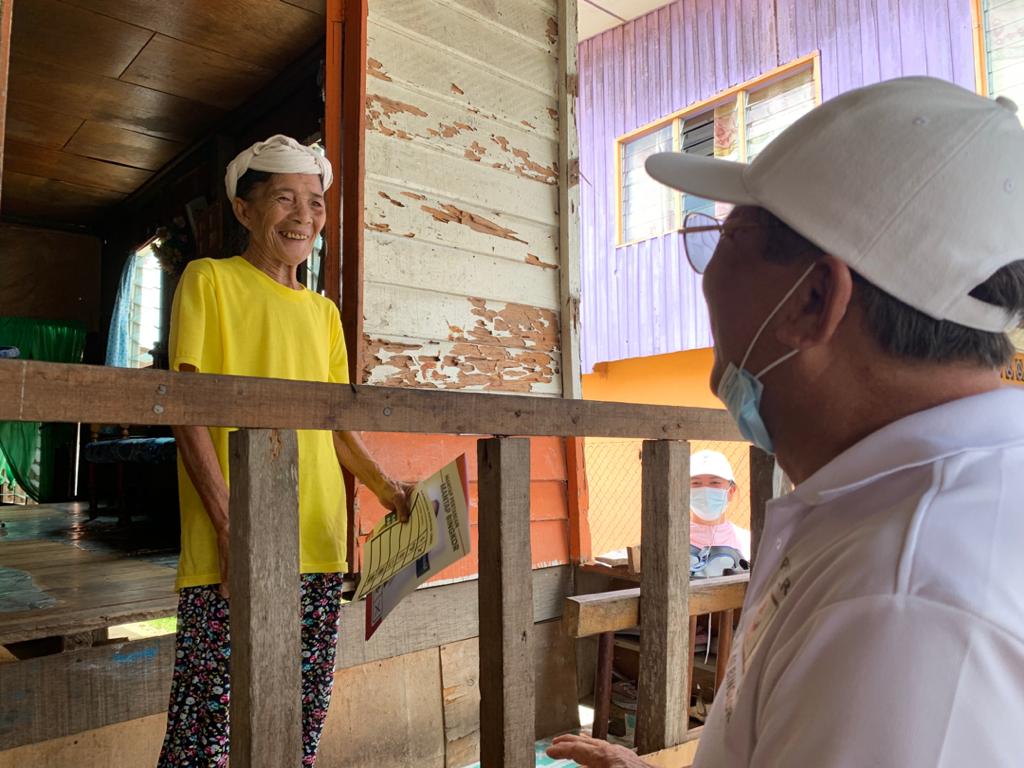 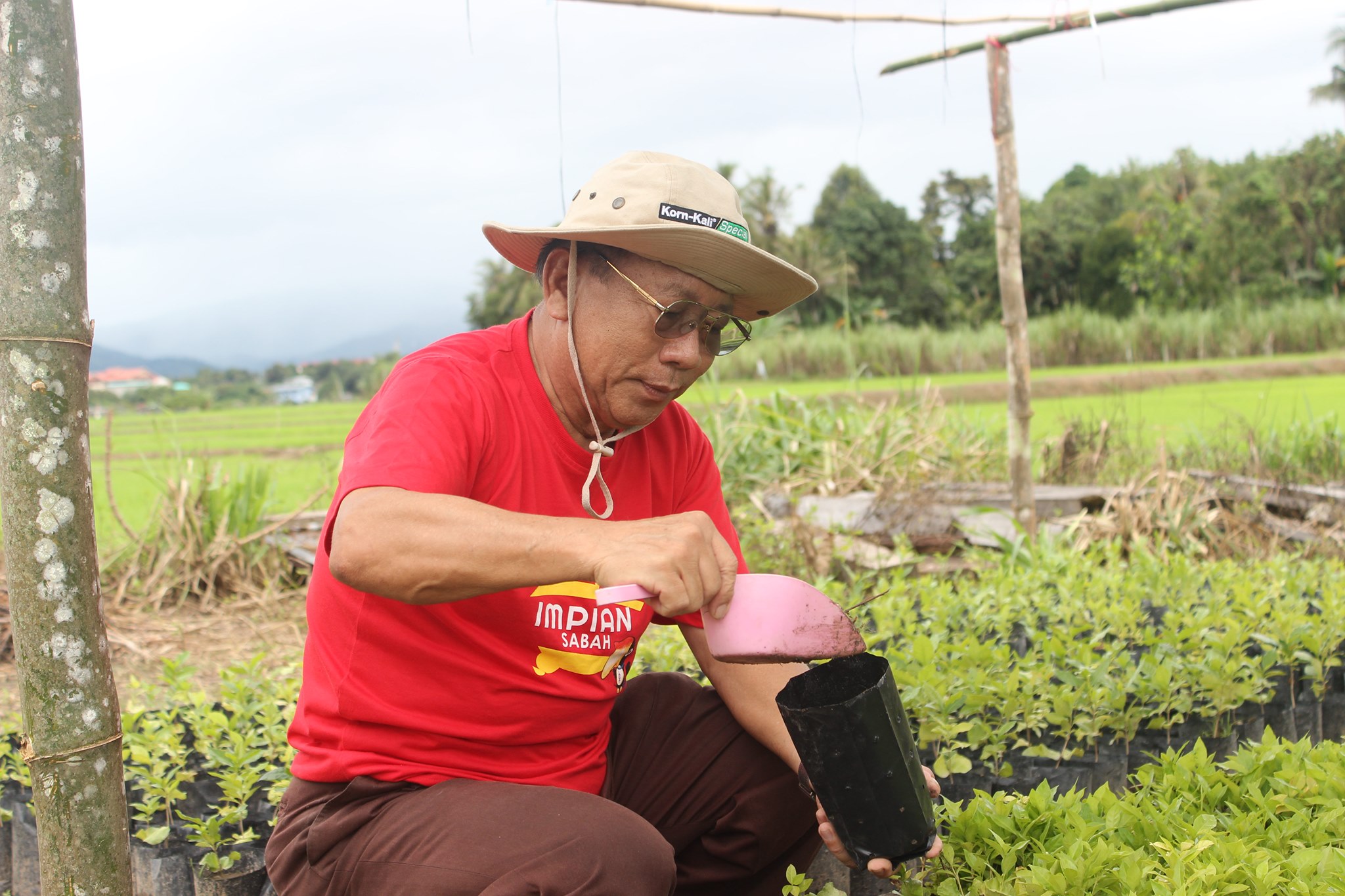 Back in 2018, Peter Saili contested in GE14 but lost narrowly to become the ADUN of Bingkor. However, it never hindered his spirit and he continued to consistently help the community wherever he could.

With the help of an NGO, Impian Sabah, he and the community raised funds and built a gravity-fed water system from the mountains to supply clean water to Kg Bunga Raya and Kg Linsosod in Bingkor. 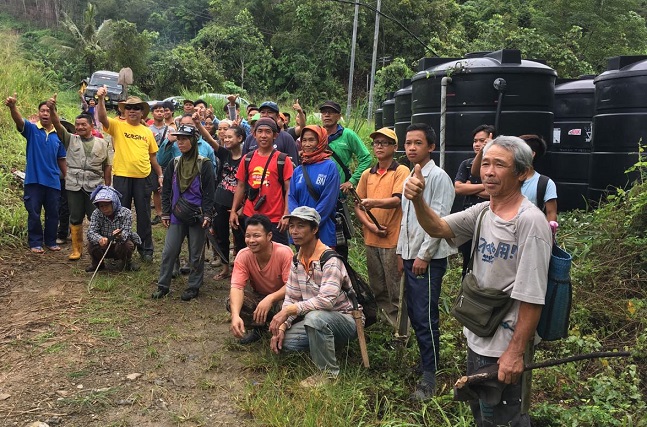 Fast forward to 2020, Peter again contested the 16th Sabah State Election and again, he came out short. However, as how he has shown previously, we’re sure that he will continue to help the community of Bingkor.

Also read: Meet Shureena Angie, The Woman Who Travels Around Sabah With Her Dog In A Campervan! 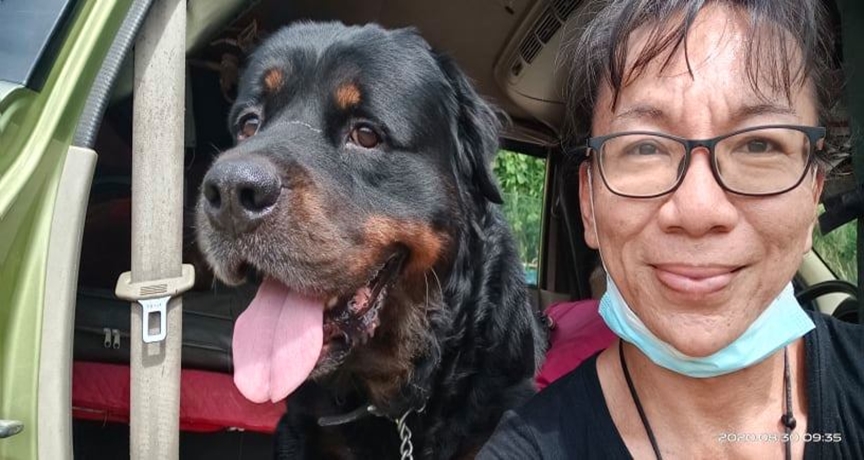