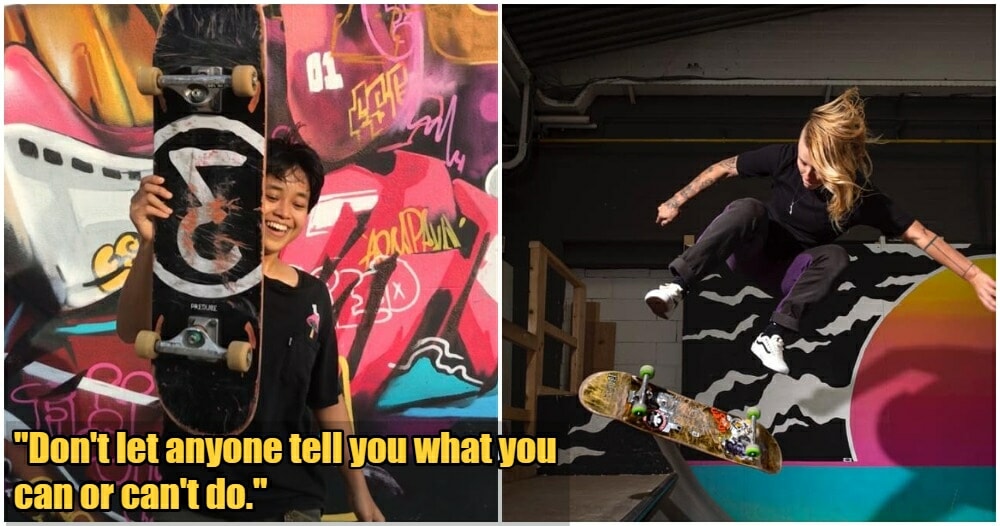 When we think of skateboarding, we think of Tony Hawk and his console game in the early 2000s. Ah, those were the good old days!

Throughout the years, the sport that was predominantly male-dominated saw an increase of female skateboarders. So today we will be talking with two of them on how this sport has changed their lives and has empowered them. 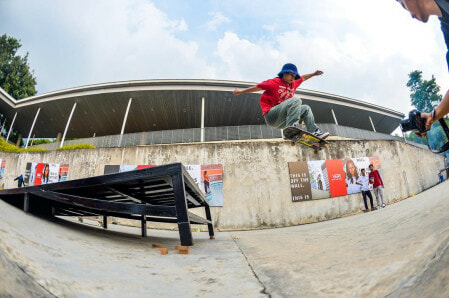 Firstly, we talk to one of our very own Malaysian female skater, 23-year-old Khadijah Juswil. Khadijah, affectionately known as Jah by her fellow skaters, “absolutely shreds” according to one of the male skaters at the skatepark. When asked how it all began, she said that she grew up playing video games and watching cartoons revolving around skateboards.

One day, 15-year-old Khadijah was walking home from school and she noticed a bunch of boys doing tricks on the skateboard by the stairs. Then she realised that skateboarding was not only in the screens but it is very much in reality. She thought to herself: “I want to experience it for myself.”

Thus, she started on her journey of skateboarding and has never stopped. When asked if she has faced any discrimination for being a female skater, Khadijah told us that she was never called out by any of the guys at the park. On the contrary, they were very welcoming and are willing to teach anyone who may be having problems with their tricks.

“Initially, a male-dominated skatepark will definitely be intimidating to a female skater, but when it comes down to it everyone is just there to skate and have fun. “

Skateboarding is, however, not without a struggle and for Jah, her brand of struggle is trying to learn new tricks. With tons of commitments out of the sport, she reveals that she can’t skate six days a week like when she was a teenager.

“I hope I can still experience the joy of landing new tricks here and there.”

As for tips for girls who are interested in skating, Khadijah explained that there is no need to look or dress a certain way to start the sport. Other than that, when you are unsure of how to land a trick, you could always ask for help from the people at the skatepark. But if you are still a little shy, you could always form a female group who skates together and empower each other through all the little victories! 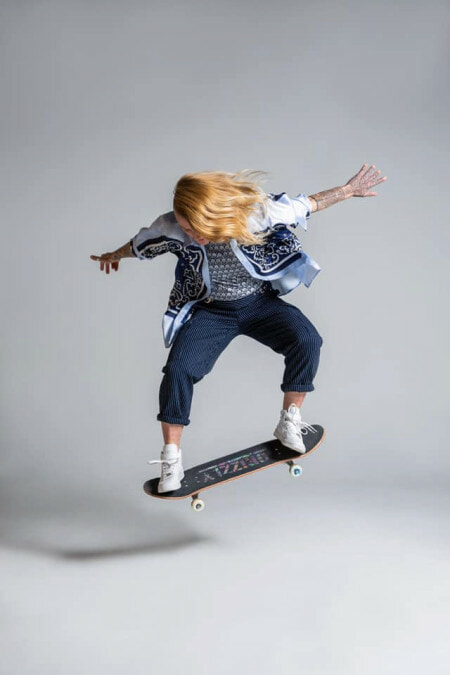 Hailing all the way from the Netherlands, we managed to talk to one of the most humble professional female skateboarders, Candy Jacobs. Candy started skateboarding in 2003 out of boredom and through that, she was introduced to a world of movement, freedom and creativity properly tied up with an awesome scene. She fell in love with it and here she is, a professional skateboarder 17 years later.

When she first started skating with her friends, she never felt like being a female would put her into any disadvantage. The perception was changed when she started joining competitions and realised that inequality exists in the form of price money, practice time, coverage and so on.

“Being a professional skateboarder as a woman has been hard as we don’t get much coverage or a steady income. But at this moment, there are brands out there that are definitely looking out for women.”

In regards as to whether male skateboarders treat her differently, Candy says that when she goes to unfamiliar skateparks, people will look at her in a certain way. Sometimes she’ll get challenged by them to a game of SKATE (doing tricks). Back in the days, some men will actually tell Candy that she only got sponsored by brands because of her gender.

“My defense mechanism is to skate even harder until I didn’t need their validation anymore.”

Being a woman in the skateboarding scene is a double-edged sword; Candy feels like no matter how gnarly some of the tricks you do, you’ll only be seen as a “female skateboarder” and not as an individual who has a certain style or message in skateboarding. The good side to it is that being a female has opened up paths that wouldn’t have been possible if she was a male skateboarder. No matter what, she says,

“Skateboarding gives me the ultimate freedom and it is the platform where I can be myself. I hope I can inspire people to find that thing in their lives that makes them feel the same way.” 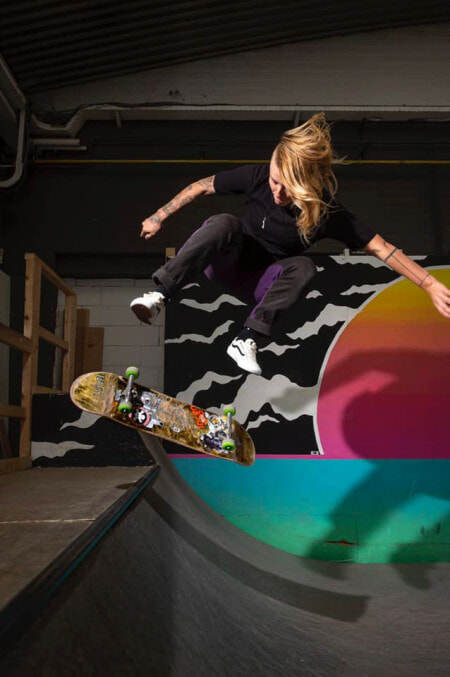 For girls who want to try out skateboarding, Candy advises you all to go for it and to start in an environment where you feel comfortable, with an open mind. To all the girls out there, she says,

“Live your dream and don’t let anyone tell you what you can or can’t do. We should all support and take care of each other!”

So if you’re a female, interested in skateboarding and you’re not sure where to start, then the following workshop will be perfect for you! 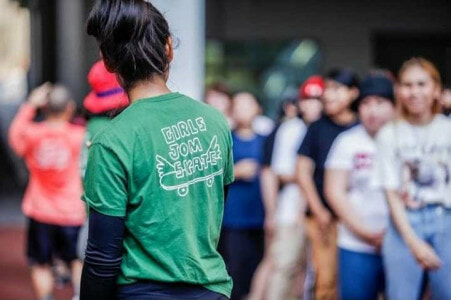 It is called Girls Jom Skate (GJS) and it caters to women of all ages. Speaking to one of the co-founders, Yeng, we were told that GJS aims to remove all barriers of entry to skateboarding by providing everything including skateboards, safety gear as well as national coaches. By putting everything on the table, the one thing left is just the girl/woman’s commitment.

Girls Jom Skate was started by Yeng (who is also one of the bosses of the skate shop, Wheel Love) when he wanted his daughter to feel safe at the skate park. He approached Dianne (GJS co-founder) and asked if older girls/women feel intimidated at the skatepark to which she said yes. With that, a pact was made and GJS was born. 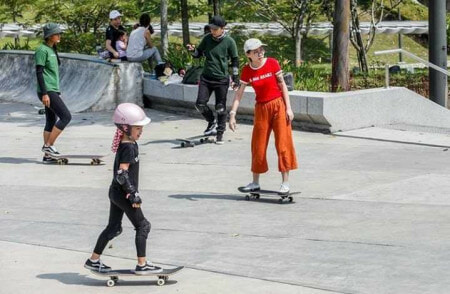 The workshop is a 3-hour program and it’s open to females of all ages which makes it a little harder to cater to everyone. However, Yeng handles most of the physical activities while Dianne motivates everyone. They begin by warmups and after that, they will split everyone into either beginner level or intermediate levels. Everyone will have 90 minutes to skate before cooling down.

With everything that they offer, the fee to this workshop is not expensive at all! You just need to pay RM10 as a commitment fee and if you need any gear, they are available for rental at RM20. It is also a place for women to make friends following similar interests as each time they have a workshop, about 40-50 people will attend! 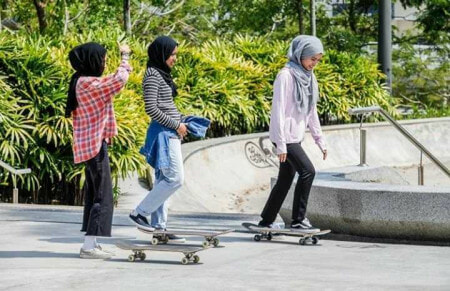 Yeng also mentioned that back then there wasn’t a lot of female skaters in Malaysia but today, it’s so much easier for girls to pick up skating thanks to media exposure and also the Internet. With that, Girls Jom Skate would like to tell everyone that you should never be afraid to try something new.

“Do not be afraid of trying and failing. Skating teaches you the only way to learn is to get back up after a fall and the same can be applied to life.” 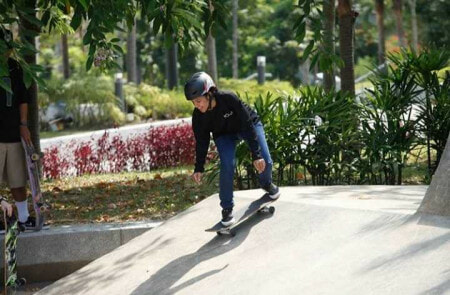 So there we have it! Once known as a ‘rebellious street sport’, skateboarding was created just 80 years ago by Californians who wanted to surf on the streets and it has come so far. In the summer of 2021, it will take its debut stage at the Tokyo Olympics and we can’t wait for that to happen!

Also read: Tony Hawk Left A Note for 16yo Skater Who Received Massive Hate by M’sians 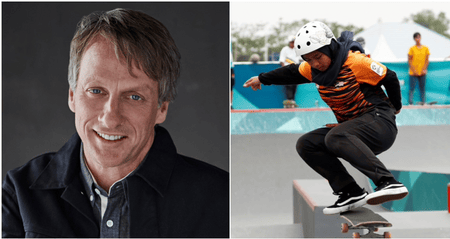