A man who was convicted of selling illegal ‘cheap’ cigarettes was believed to have jumped off the Second Penang Bridge after he left a suicide note on Facebook.

The man, Mr. Shukri (full name omitted for reasons of privacy) wrote in his post revealing that he was summoned to appear in court because he was selling “cheap cigarettes”. 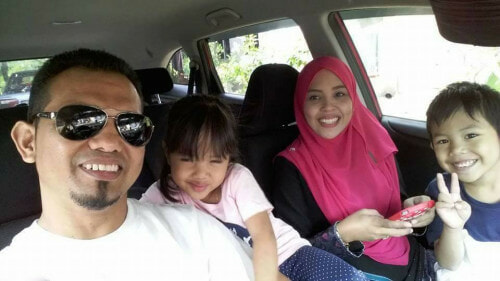 Selling the cigarettes in his sundry shop in Butterworth, his bail and fines amounted to “thousands of ringgit”. The decision to take his life came after the Customs Department took him to court for selling RM360 worth of “cheap cigarettes”, an offense that can see him jailed.

“Peace be upon you my friends and particularly my wife, children and beloved family members. I am so sorry because the things that I have done never crossed my mind.”

“I hope the public would not be cruel and insult my wife, kids and family.”

“I have been very stressed with our evil government. Just because this cigarette that’s only worth RM160, I will be jailed. This is my first offence back in 2012. Only now is it going up to the courts.”

He also stated that the court date was supposed to to be the day before yesterday, but it got postponed. He also recalled the previous times he got in trouble over cheap cigarettes.

He was said to have settled his previous fines by borrowing the money from his friends. He also admits his wrongdoing but claims that the punishment was not just for his actions as government directors who steal millions are allowed to be released on bail.

“Damn our current government leaders. A small village sundry shop doesn’t make large profits at all. (My) margins are already cut thin after the implementation of GST. It is true that our ruling government is evil.”

“Today I have decided not to show up to the court because I am out of money. There is so much burden for me to bear. And I am not willing to go to jail.”

“With this I chose to be martyred as a citizen that was wronged (by the government). I will end my life, because I have dreamed many times of drowning in the ocean.”

After asking for sympathy from his kids and family, he proceeds to dedicate a few words before he ends his life. Among those he mentions are his wife and kids.

“For my wife, Nur Azianti, forgive me because I have made you worry so much over this cigarette case. Please find another man who will love you and the kids with all of his heart. I love you so much, darling, but I am not the best.

“Daddy’s sorry, Ariq and Shafia. Take good care of mother when you guys are older. I am sorry, mom (Makteh Bibah), Chek has no other choice, I am sorry.”

“To my sister Nor Aini and my brother-in-law Zamri Mat Ishak, continue running my little sundry shop and if that is burdensome, do sell it to any interested parties.”

“To any of you who owe me anything, consider it settled. And what I do owe to Mohn Hazril Jamaludin and Mohd Naim, please see my sister, she will help settle off what she can.”

“I am just selling cheap cigarettes, not stealing millions from the people. I have no further option, my fellow Malaysians. I had no sleep last night. But I have no other choice.”

“That is all. Once again forgive daddy, (my children). Forgive me, darling. Forgive Chek, mom.”

Initially, the man wanted to go to jail, but the thought of his children being teased and called the kids of a convict put him off.

He also called out to God, asking for forgiveness and also allowed his status to go viral to create awareness that Malaysians are “ruled by tyrants”. 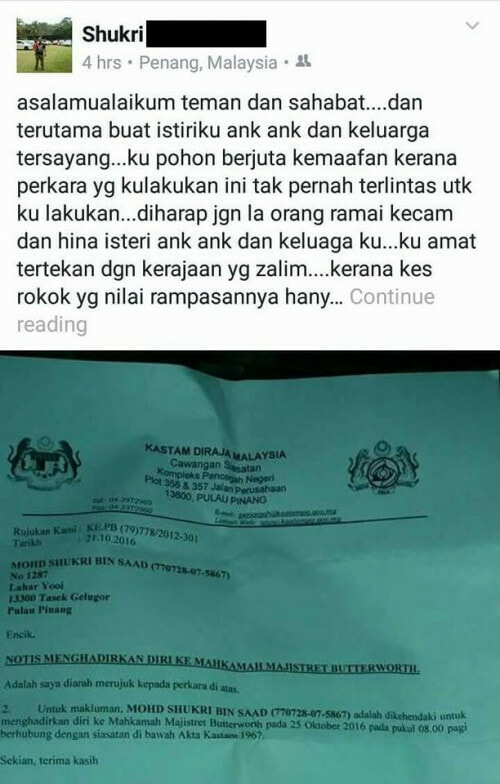 Motorists on the Penang bridge heading towards the island noticed a kapcai motorcycle parked along the side. It was later confirmed to be a Modenas 120cc motorbike, suspected to belong to Mr. Shukri.

Besides the motorcycle, there was a pair of slippers as well as a backpack and an envelope with Mr. Shukri’s name and particulars. 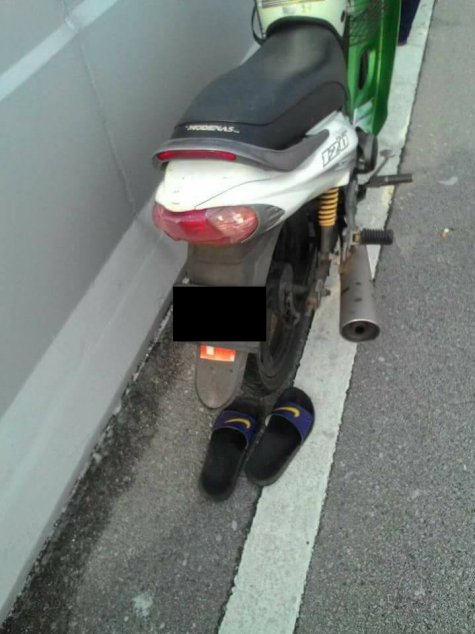 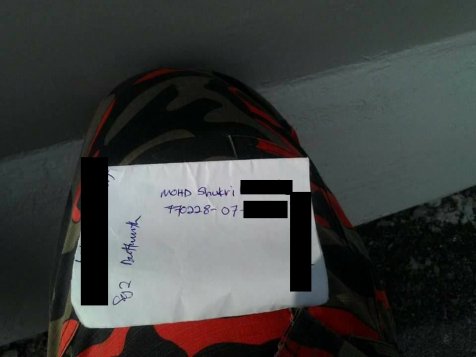 Fearing the worst, these motorists immediately alerted the authorities, who rushed to the scene. The pictures from the scene together with the original post went viral on social media.

Malaysian Maritime Enfocement Agency Second District Director Captain Rozali Mohd Said said the search would continue but if the man had indeed fallen into the sea, they are confident they’ll be able to locate the body.

“We are aware that this man’s note has gone viral. We cannot comment as this is beyond our jurisdiction,” 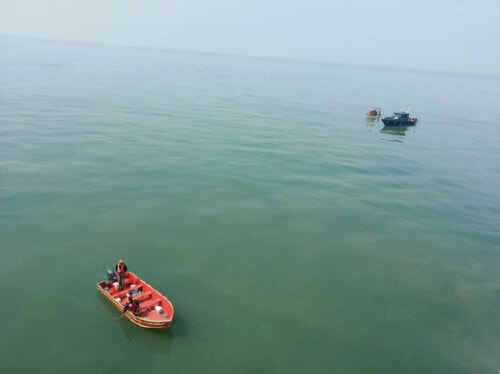 It is said that friends and family have been trying to get in touch with the wife of Mr. Shukri, to no avail. Police are not ruling out the possibility of foul play.