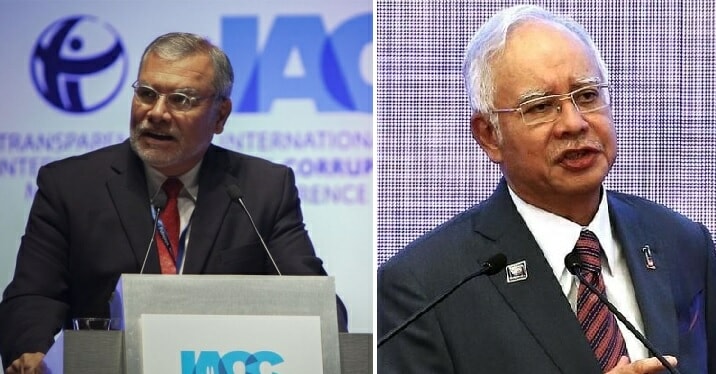 The 16th International Anti-Corruption Conference which is held in Putrajaya is a 3 day conference that started on 2nd September.

Jose Ugaz, chair of Transparency International, said Malaysia had taken many measures and initiatives to tackle corruption but that none of those claims would be credible until it provided answers to the finance scandal.

The head of the world’s largest anti-graft organization said, “We want to see more progress but that cannot happen while there are unanswered questions about the millions that made its way into the prime minister’s personal bank account,”

“There are two questions that need to be answered: Who paid the money and why? Where did it go?,” Ugaz, a Peruvian lawyer with a history of tackling grand corruption, said.

The conference is attended by more than 1,000 delegates from 130 countries. Najib, who is under fire, had the perfect opportunity during the conference to speak and gain back the Malaysian people’s trust, but pulled out of giving a keynote speech at the conference.

Low, minister in charge of governance and integrity, advised Najib to consider current circumstances and possible negative reactions at the conference.

“He was advised that if he comes, he might face fierce activists. I have to advise him. I said, I can go, but if you want to, you can.” Low said.

“No one can be in Malaysia and not be aware of the corruption allegations of recent months and how damaging they are to the country.

“There is a corruption crisis here,” Ugaz said,

In the speech, he mentions that, ‘only one man could answer that question’, blatantly implying to Najib Razak, the current Malaysian Prime Minister who was involved in the scandal.

“If that does not happen then only a fully independent investigation, free from political interference, can uncover the truth,”

“Until that happens, no claim from the government on anti-corruption will be credible.” said Ugaz.