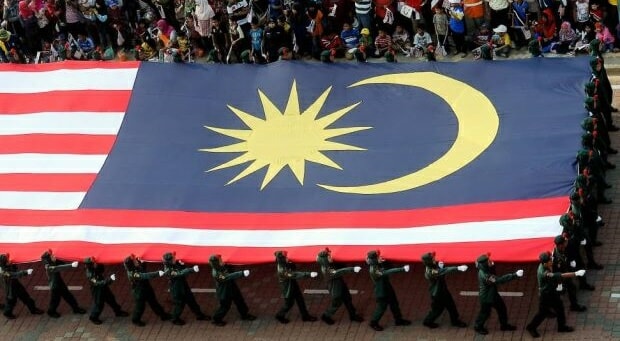 An image of the national flag, Jalur Gemilang, has caused an uproar in Malaysian social media.

The image gained a lot of attention and went viral, especially in Facebook.

The picture shows the flag being march down the streets in an inverted or ‘terbalik’ position. Many were quick to assume and also were misinformed. which led them to pass negative comments that came flocking in condemning the government, questioning their patriotism.

However, that is not the case as the flag’s orientation is correct based on protocol.

“No, it is not a mistake, and no one got it wrong.” said facebook user Michael Cheang.

“Since it must face the grandstand it is passing, and also cannot be upside down (that’s a sign of distress), this is the only way to hold it in a parade,” said Cheang.

“It’s the same for flags displayed on the side of airplanes.”

One user writes, “It’s easy for us to quickly assume the worst because of the chaos that has been happening in our country. I’m glad we learnt something new and I hope everyone knows about this protocol soon. Bad news spread like wild fire while the more well informed ones don’t get circulated just because it’s less interesting. We should all play our part and teach/correct our misinformed family and friends instead of choosing to be ignorant.”

Guidelines when flying the national flag:

2. Arrangement when there are two flags on national level

3. Arrangement in a shophouse

iii. When flag is laid down