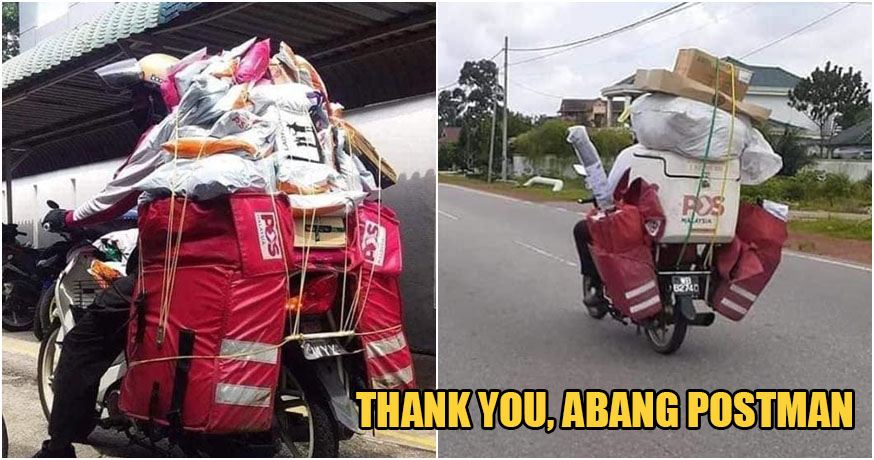 Online shopping is slowly but surely, replacing the need for many of us to step out of our door to head to the mall. Which, in times like this, is really a good thing to practice. And if the recent uptake in parcels Pos Malaysia has been receiving since the Covid-19 pandemic began is any evidence, it is clear that Malaysians are quick to take up the habit of shopping right from their mobile phones.

But as a result of that, Pos Malaysia has been receiving literal mountains of parcels with the number of people now shopping online and as a result, our postmen have had to work around the clock to ensure that everything gets delivered on time.

In fact, Pos Malaysia has been urging more people to come on board as part-time deliverymen to help with delivery, and are willing to pay as much as RM6,000 in commission.

However, in a recent Twitter post that has since gone viral over Malaysian social media, we are reminded that just to meet demand, our postmen have been struggling to keep pace with the parcels that they have to deliver everywhere on the daily.

Shared by Twitter user @anthraxxx on Sunday (17th May 2020), the series of three photos included in his now viral Tweet shows postmen working for our national postal service on their motorbikes, ready for the day’s work ahead. But what’s truly shocking is the amount of packages that they have strapped on the back of their motorcycles.

Bound and tethered only by rope, each motorbike can be seen piled up with a harrowing amount of parcels. In fact, so many parcels were strapped on to each motorcycle, it’s a wonder how the abang postman can still maneuver his motorbike at all!

This comes after another social media post which went viral recently highlighted the plight that our postmen face in trying to earn a living, after a young Pos Malaysia rider broke down in front of a customer when he found out that he will not be receiving a bonus this year, despite clocking in overtime during the MCO period.

To our abang-abang postman, we salute you for continuing to serve the community and ensuring that all Malaysians can settle into the ‘new norm’ with your continued service.

Also read: Pos Laju Rider Sobs Under Heavy Rain When Told No Bonus This Year As He Can’t Provide For His Family