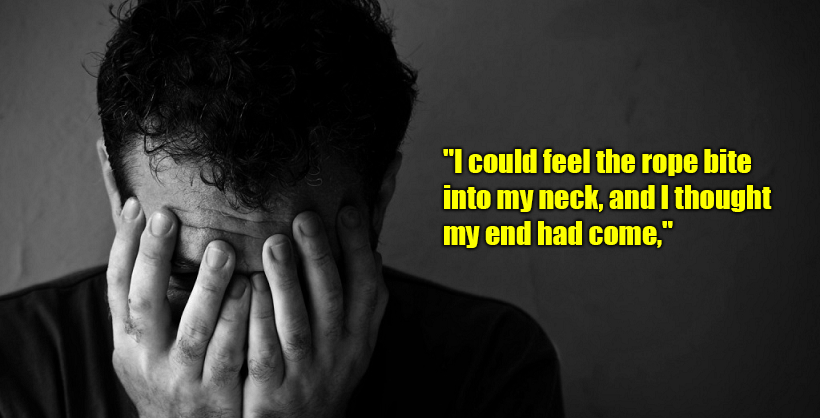 Insurance policies are meant as a sort of safeguard for your life but for one retired Royal Malaysian Air Force sergeant who is the possessor of 11 insurance policies that are worth a grand total of RM1 million, he lives in fear everyday that he is going to die.

He has already encountered one attempt on his life just recently.

On September 10, the man who is now working as a construction safety officer met with two men who said they were civil engineering students. They had contacted him two days prior to the incident stating that they wanted to do research and wished to interview him at his work site.

On that fateful day, the duo arrived at his home in an old Kancil to fetch him to his office, where they proceeded to take some pictures of him at work. During the drive home, he was in the front passenger seat when he felt a rope around his neck.

“I could feel the rope bite into my neck, and I thought my end had come,” he said.

Luckily for him, with 18 years of military training under his belt, he managed to escape. The man punched the attacker and gave a kick to the driver’s ribs before finally fleeing from the car. He contacted his supervisor with the help of a passerby and went back to the construction site.

After this nightmare, he told his wife but she was cold and indifferent. However, it was one week later that he became suspicious when he heard his wife on the phone with an unknown number. She told him it was a wrong number but he didn’t believe her and seized the phone from her and redialed the number. He was stunned when the caller’s WeChat profile picture appeared and it was one of his assailants.

“I was shocked and confronted my wife but she said that she didn’t know anything,” he said.

About a month after that, she left him and took their eldest son to a women’s shelter and made a police report against him for abuse. She is now living with her mother as she has been kicked out of the shelter. The father of four said his wife has racked up an astronomical bill of RM60,000 after she left the house.

His suspicions were deepened when he found the numerous insurance policies stashed all over the house.

It seems that the wife had bought these insurance policies without his knowledge!

He claimed that he didn’t know any of the policies and the signatures on them were forged. It comes as no surprise that the sole beneficiary of the policies is his wife.  The man has lodged seven police reports over the course of four months.

The authorities are looking into his case and have advised him to cancel the insurance premiums as soon as possible. Meanwhile, he is looking after his other three children and lives in fear that if something was to happen to him, his children would be abandoned.

The unfortunate man states, “I’m not looking for revenge. I want to live my life free from this cloud of fear hanging over me.”