Semporna is well-known as a diving paradise but they are also notorious for being really dirty so the authorities in Sabah are trying hard to clean up the image. Literally! In case you weren’t aware, the local council has started a new initiative on January 1st that will see litterbugs getting fined RM500 or being forced to pick up rubbish on the orders of Chief Minister Datuk Seri Mohd Shafie Apdal.

According to The Star, people who were caught littering were given a choice of either paying a fine worth RM500 or cleaning up rubbish for one hour. The police and local council worked together on Friday (Jan 4) to nab litterbugs in efforts to keep their town clean.

If you thought that cleaning up is a small price to pay, Semporna has taken the rather unique approach of punishing these offenders by making them wear a special vest with the word “monyet” (monkey) emblazoned on it. That’s because they mentioned before that “only monkeys litter” and not humans, so those people who simply throw rubbish should be classified as a monkey! That’s actually a pretty clever idea!

The authorities said that they caught nine litterbugs on Saturday (Jan 5) around 3pm, which consisted of both Malaysians and foreigners. Semporna District Officer Bianus Kontong said, “We give them a choice to pay the RM500 fine or carry out community service for an hour.”

However, he said that most of them chose to do the community service as they could not pay the fine and had to clean up specific areas as their punishment. All while wearing the “monkey” vest! A few foreigners who were discovered to have no valid documents were sent to the Immigration Department for further action.

Bianus added that the campaign was working well as residents were more civic conscious and would be more careful about throwing rubbish at designated areas. There would also be gotong-royong activities held over the next three Sundays to clean up Kampung Air, Kampung Simunul and Kampung Bangau Bangau as well as to educate residents about the importance of keeping their towns clean.

Remember everyone, only monkeys throw rubbish indiscriminately so if you’re not a monkey, don’t litter okay? 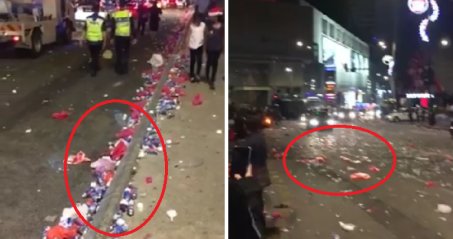