When I was at Zara boutique, while choosing a few dresses, I realized one elderly lady was standing too close to me and pushing me while I was choosing the clothes, (I looked at her and thought that she is either Thai or Indonesian). And after a few minutes, this lady was gone. I continue looking at the clothes for a few more minutes (maybe around 5 minutes) and then I decided to leave Zara.

I went to Mark & Spenser kiosk selling chocolates and biscuits, located in front and not too far from Zara boutique. I have selected a few items here and when I was at the cashier to pay for the items, I just realized that my wallet was lost.

I immediately went back to Zara boutique, called the manager on duty as I remember the face of the suspect who came very close to me and was pushing me at Zara boutique dress’s area. The manager on duty checked the CCTV immediately, the time showed on the CCTV was 1.33pm and I was actually surrounded by not only one, but three ladies at the dress’s area. And the CCTV images showed, one of the ladies has stolen my wallet from my handbag when I was busy choosing the dresses at Zara. After obtaining my wallet these suspects left Zara.

Zara boutique’s manager has identified these suspects as the same case happened to one of their customers on Saturday, 4 July 2015. This customers handbag was cut, iPhone 6 & wallet were stolen from her handbag also at Zara KLCC.

Zara boutique’s manager and one of the security guards accompany me to the KLCC security’s office, which is also located on the same floor (nearby Chamelon women’s accessory shop).

As we were walking to the KLCC security’s office, we bumped into a young Malay lady and two of her friends (this young Malay lady was the victim of Saturday, 4 July 2015 pick pocket incident at Zara KLCC). She was standing in front of Chamelon with two of her friends and when she saw us walking, she approached Zara boutique’s manager and told that the three suspects are now in Chamelon, they are looking for other victims in Chamelon.

Immediately, the KLCC security guard called a few more securities to come to Chamelon to detain the suspects. Two suspects have been held, but one of them has escaped. They were brought to the KLCC security’s office for investigation. The suspects are from Vietnam, they hide the a lot of cash they stole (including my money RM2015.00, the whole stack of this amount of cash was found in one of the suspects secret pockets in her undergarment). When we were in the security’s office, one of the Vietnamese ladies offered me the money she stole from my wallet and hoping that we will release them. 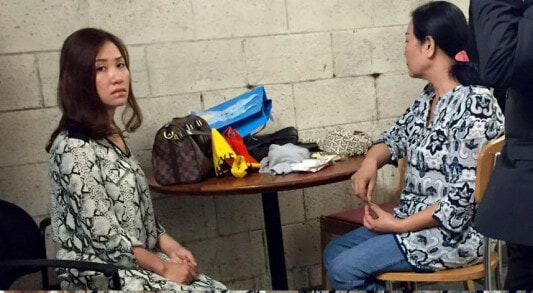 2 of the 3 suspects that were detained

Within less than 15 minutes, they have taken out the cash from my wallet, hide the cash in their undergarment and threw my wallet somewhere in KLCC area and they went to Chamelon to find their next victim.

These two ladies (in the picture) have been detained for further investigation, one of their friends, managed to escape. According to the police, these ladies denied that they stole anything and it seems that they just entered Malaysia on 3 July 2015 (Friday).

Now, I am not sure if they will be released or not or what is the next action will be taken against them. The CCTV has clear evidence they have been to Zara KLCC on both Saturday, 4 July & Sunday, 5 July when the two incidents happened. And what they did to me on Sunday, 5 July is very clear on the CCTV.

Reminder to every one to be more weary of your surroundings and keep your bags and purses close to you at all times!