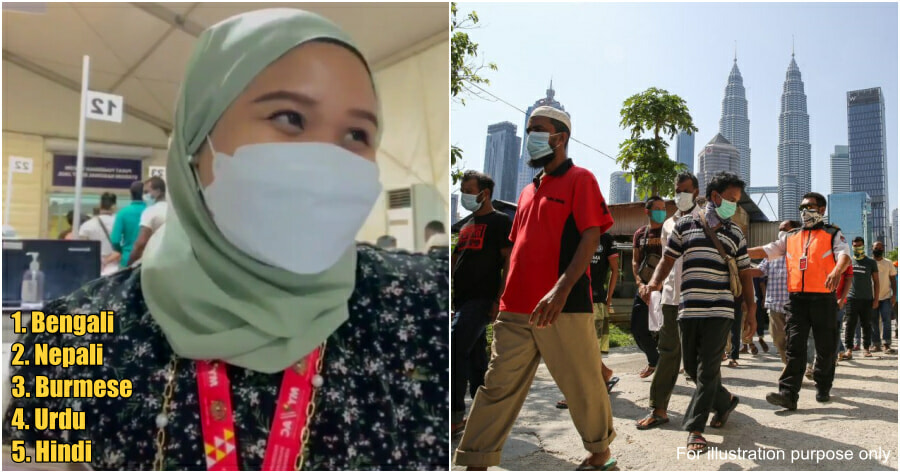 “Learning their language makes my job so much faster!”

In the midst of all the ongoing political crises, let’s not forget that it’s also the most patriotic month for Malaysians as our national day is nearing. And this is what Malaysia is all about…

Ain Syawani, a volunteer at the Bukit Jalil National Stadium vaccination centre (PPV) decided to pick up a total of five new languages in order to perform her duties better and cater to the foreign workers who turn up for their Covid-19 jabs.

On 15 August, she posted a video of herself via Twitter, showcasing her speaking Bengali and Urdu whilst her performing her tasks.

In her post, she says, “I just want to share this video of mine talking in Bangladeshi (Bengali) and Pakistani (Urdu)! Learning their language makes my job so much faster! And I love to see their reaction the moment I speak!” 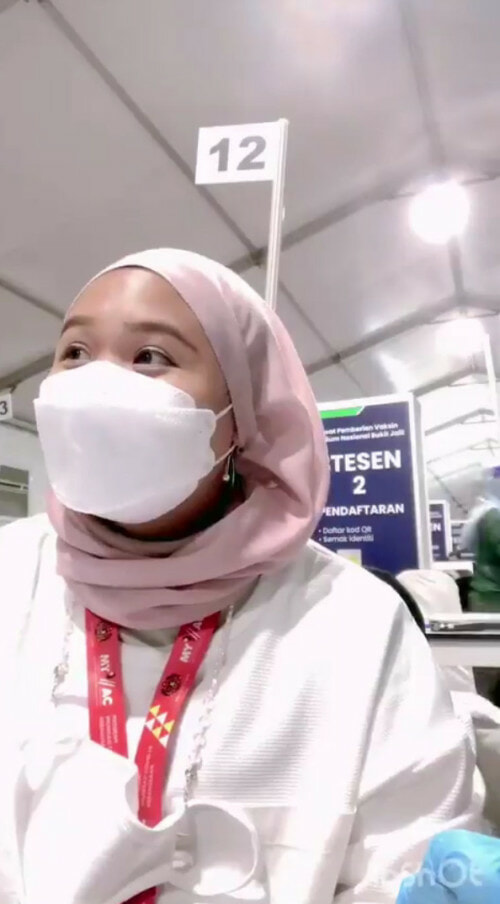 She wrote, “Talking to them in their language makes me happy and I wish that I could record their reaction the moment I spoke! It was really genuine. This is the least I could do, really.”

Speaking to WORLD OF BUZZ, Ain said that what inspired her was the existence of language barriers making it hard for her to communicate. “I wasted so much energy and time assisting one vaccinee and in a day I would be assisting a minimum of 150 vaccinees,” she said.

“I don’t think I want to waste anyone’s time, so I decided to learn their language instead.”

She also mentioned that she has picked up a total of five new languages which are Bengali, Urdu, Nepali, Hindi and Burmese. “It has been really helpful as previously it took me between five to ten minutes to assist one vaccinee. Now it takes a maximum of two minutes to assist them.”

I want to share this video of me speaking Hindi, Nepali & Burmese! I must say that Burmese is by far the hardest to learn but as long as the vaccinees understand, I’m more than happy! Also, pls listen to their answers, they were smiling all the time while answering to my qs! 😂 pic.twitter.com/HFHHAjDFCl

Ain explained that the reaction of the foreigners is priceless as their eyes shone the moment they hear her speaking in their own language.

“Some laughed because they can’t believe that I can speak in their language! I really love their reaction.”

Her post has garnered plenty of attention and is now sitting on over 30,000 likes and almost 14,000 likes. Speaking on the reactions and comments she has received from netizens, Ain says that she feels overwhelmed after receiving loads of compliments. “They all thanked me for being really nice with them,” she added.

It even caught the attention of the special adviser on public health to the Prime Minister, Dr Jemilah Mahmood who commended her actions on her post.

Bravo! That’s the right spirit and thank you for your dedication and positive attitude. I can see that beautiful smile below the mask as your eyes light up 👏🏽🙏🏽

However, despite all the positives, Ain pointed out that she also received some backlash with people saying, “Why should we Malaysians learn their language? Shouldn’t they be the one who learns our native language?”

“My simple answer is, I learn their language for fun, to ease my job and because I had the opportunity. So why would I waste it?”

In her following tweets, she also explained that she aims to spread awareness as she has encountered many volunteers treating foreigners disrespectful. “Regardless of who they are, we must treat them nicely. They waited a minimum of three hours to finally get their turn.”

i want to spread a little awareness here since i have the opportunity. ive encountered too many volunteers talking rudely to them. regardless siapa pun diaorang, treat them nicely. they waited min 3 hours to finally dapat turn. ada yang tak makan –

She also pointed out that we should not scold them. “I understand that it is hard to communicate with them as they don’t understand us and neither do we. Some people even curse at them. Why would you treat them that way?” She urged Malaysians to treat them how we would like to be treated and make them feel welcomed.

“I took the initiative to learn because this makes my job so much easier! We chose this job so we must do it passionately.”

Ain recalled her experience in asking a Bangladeshi national why they were trembling, to which he responded that he was afraid of being scolded again.

“Seriously? We shouldn’t act like this. We meet a lot of people every day what’s the point of being stressed the whole day just because of them,” she asked.

We hope that Ain’s actions will inspire more and more Malaysians to seek unity and promote diversity, despite the tough situation we are currently in. What do you think of this? Let us know in the comments!

Also read: “What if they were your family?” PPV Volunteer Calls Out M’sians For Mistreatment Of Foreign Workers