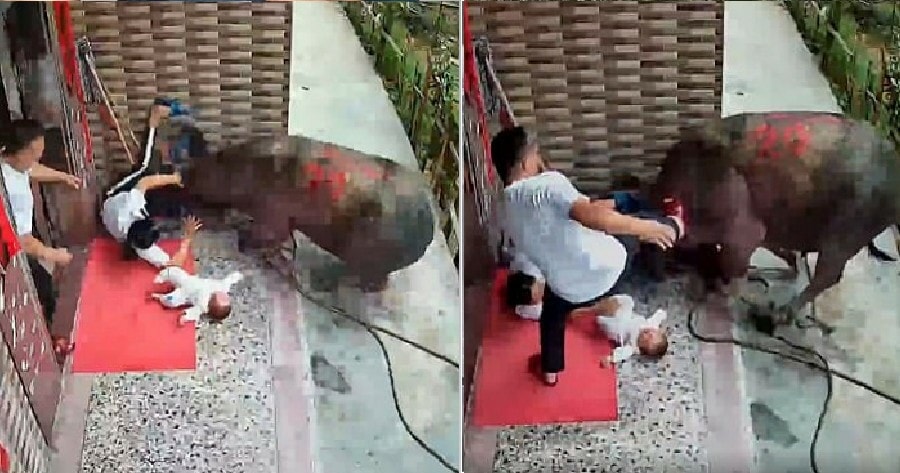 So scary weh! Thankfully, the mother and baby both survived the incident unharmed.

A terrifying incident was caught on camera as a huge water buffalo, appearing to be frightened, slammed into a mother and her baby after running away from its owner on the way to the slaughterhouse.

As reported by the Daily Mail, the incident took place in the city of Heyuan, Guangdong Province of southern China on 19 April. It was all recorded by a security camera placed outside of the family’s home.

In the video, it can be seen that the mother was holding her child outside their house when suddenly a water buffalo came charging into her. The terrified mother stepped backwards and tried to dodge the huge animal, but the water buffalo pushed her backwards, flipped her body through the air and slammed her against the wall. Ouch!

Hearing the screams of the woman and her baby, two male family members quickly ran outside and rushed to push the buffalo away.

The mother and her baby was brought to safety inside and local police rushed to the area to catch the buffalo. However, the buffalo ended up being shot and killed by the police after they were given approval by the Chinese public security bureau.

You can watch the full video of the incident here:

The mother, believed to be in her 30s, suffered soft-tissue injuries and thankfully, her child was unharmed, according to local police.

Oh, thank God both made it out relatively unscathed! Have you seen anything like this incident? What would you do if something unexpected like this happens to you? Share your thoughts with us in the comments.

Also read: Malaysian Mowgli’ Heartbroken After His Favourite Buffalo Was Slaughtered This Morning 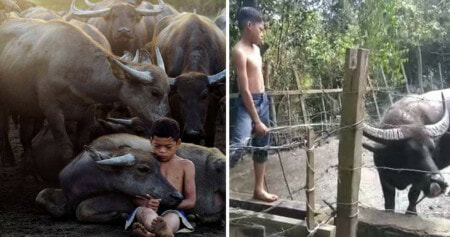