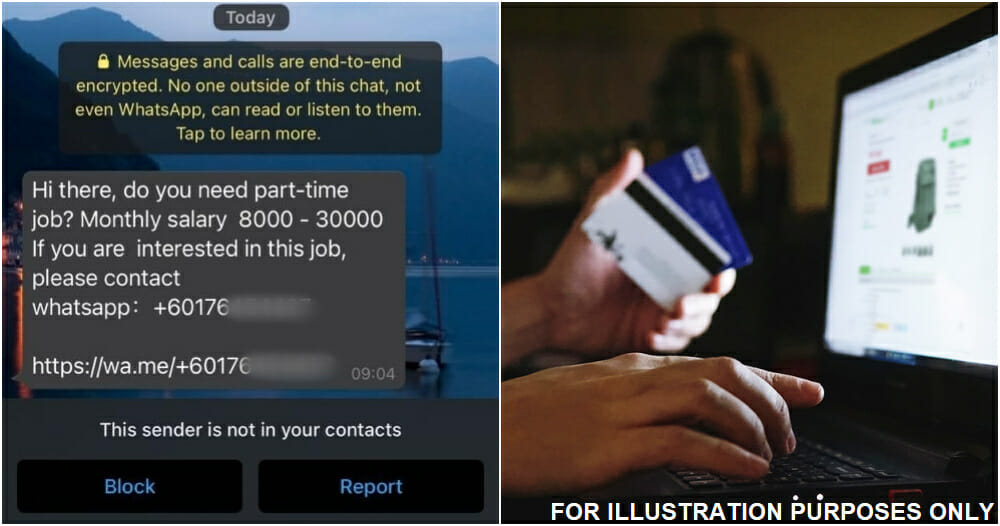 Recently, a reader named Shirley* (name changed for privacy reasons) reached out to WORLD OF BUZZ to share an incident that happened to her which caused her to lose over RM3,200 of her savings in a part-time job she took up. Turns out, she was yet another victim to an e-commerce fraud syndicate.

The unemployed 24-year-old exclusively told WORLD OF BUZZ it all began when she received a random message on WhatsApp from an unknown number.

“One day, I got a message through WhatsApp looking for part-timers to WFH. I joined them since it’s just part-time,” she told WORLD OF BUZZ.

Shirley further explained that she had recently lost her job during MCO 3.0. Hence, she had been applying for many jobs online through various platforms.

“I have been applying for jobs all over the internet, on different applications and more. So, I couldn’t even recognize which company was contacting me.

I was literally frustrated by the unemployment as I have lots of commitment to bear,” Shirley said.

She replied to the stranger by messaging the other contact number that was provided. The stranger then explained briefly to her their company and her job scope of being an “online purchasing agent” without providing her with an official offer letter.

Shirley explained that no offer later was provided as they said it is a part-time job.

“They explained that they are a private sector of Lazada and gave me an office address but I only found out later that it was fake,” Shirley said.

The tasks of a “part-time online purchasing agent”

They then explained that her job was relatively simple. “Tasks” would be assigned to her accordingly by a customer service representative who would be “training” her. Each task would require her to open a link that will direct her to an item on Lazada’s website.

Shirley would have to add the items into the cart and submit her order. However, upon checking out, she was told not to make any transactions on the Lazada website as she would have to “transfer the amount into the merchants account directly”.

Once she has transferred the amount into the account, they would reimburse the money back to her account together with a commission.

Tricking her by building trust at first

According to Shirley, after completing the first task, she did in fact receive her commission. This made her trust them and not realise it was a scam. After all, she did end up making money!

Well, at least in the beginning…

They even sent her a receipt of the transaction as proof. When Shirley checked her bank account, she did indeed receive her money back along with her commission. Feeling good about the job, she continued to work on her other tasks.

When Shirley completed her second task, she once again did receive her money back together with a commission. At this point, Shirley received RM43.11 of commission from the first task she completed and RM131 after her second task.

However, when she completed her third task, her “trainer” told her that the task was not successfully completed.

The trainer explained to her she apparently had “4 uncompleted orders” from the previous tasks that were assigned to her.

The trainer then told her she had to pay an additional RM289 for each incomplete order in that task, which would come up to a total of RM1,445.

When Shirley told the trainer she did not have enough money to complete the task, the trainer advised her to borrow money from her relatives and friends, as they were not able to refund the money without the completion of the other tasks.

Finally, after discussing other alternatives, the trainer told her to complete just one order instead of five and promised her that they would refund the money.

When she completed the task, the trainer told her she still had to complete all the other orders that were assigned to her.

Shirley then took a few days to borrow money from some of her friends so that she could complete her tasks and get her money back. This time the task that was assigned to her costed a lot more.

However, when she completed it, they still refused to give her back her money and her commission as she had “exceeded the time limit”.  That is when she knew that this was a scam.

Shirley has made a police report and hopes that others would not fall victim to this scam syndicate as many are already struggling during these difficult times.

Lazada hopes people but be more aware of this ongoing scam

In a statement provided to WORLD OF BUZZ, Lazada said they are aware of the scam syndicate that claims they are a private sector of Lazada and clarified that there is no such role as an “Online Purchasing Agent”  in their company.

They hope people would be warier about e-commerce scam syndicates and that they would continue to work alongside PDRM on this matter. 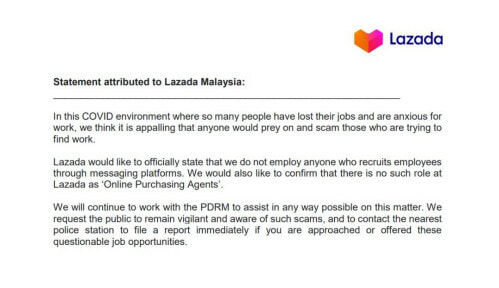 Here are some tips provided by Lazada to avoid being scammed. 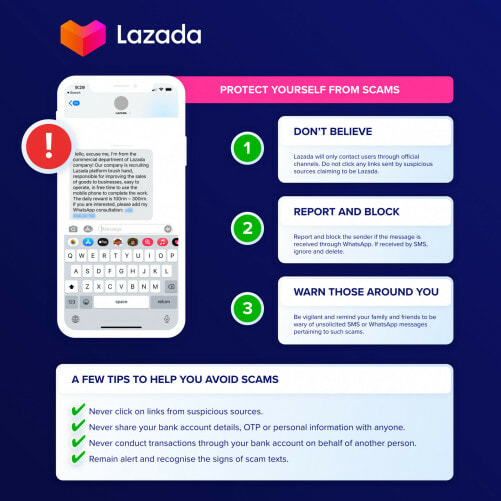 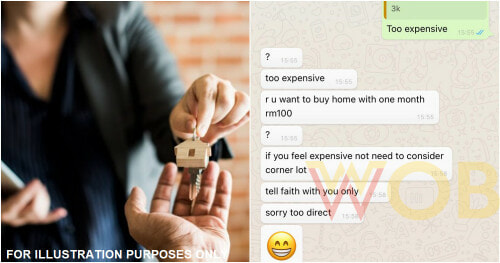