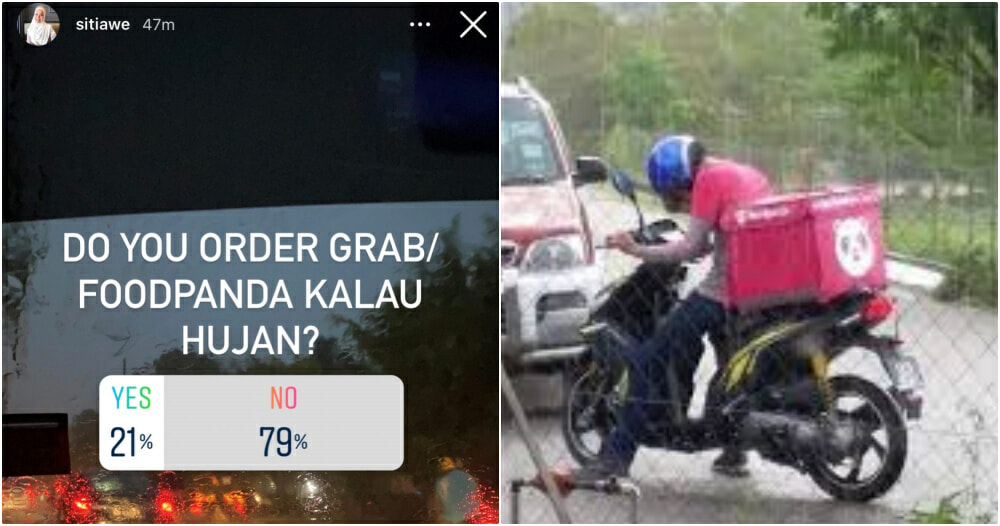 In this current pandemic, everyone is trying their best to do what they can to survive.

And that’s exactly what we see from our food delivery riders. They’re serious about earning an honest living and ensuring that the food ordered by customers arrives safely. They don’t even mind making deliveries during heavy rain.

Recently, netizen, Siti Hawa took to Instagram to ask users whether they would order food delivery when it’s raining. Siti Hawa wrote, “Will you order Grab or Foodpanda if it rains?”

According to the poll, 79% voted for no. Meanwhile, the other 21% voted for yes.

Perhaps those who voted ‘no’ felt sorry for the riders and the heartbreaking sight of witnessing these frontliners drenched while making deliveries in the heavy rain.

But what do the riders think? Much to Siti’s surprise, she received a DM from a netizen who claimed to be a food delivery rider. He responded to her poll and even encouraged customers to order food delivery when it’s raining: “It’s the only way to boost up our salary. We truly appreciate that they pity us but we choose to be in that kind of situation. You don’t need to worry if it rains, just be patient as your order might be late sometimes”.

Siti reposted the response on her Instagram story and it soon gained the attention of many netizens online. Twitter user, @loeykinn shared the screenshot of the poll on her Twitter account and admitted that she’s one of those people who doesn’t order delivery when it’s raining because she feels sorry for them.

But as it turns out, the riders are okay with it and are even willing to deliver the orders. It’s just that they asked for the customers to be patient as their order might arrive a bit late.

At the time of writing, the tweet has received over 21,000 likes. A Foodpanda rider known as Asyraf Hans replied to the thread stating that as a rider, he did not mind sending customer orders. He said he felt more appreciated when customers wrote notes asking him to be careful and no need to rush. He even said, if customers don’t mind, please leave tips for riders as a token of gratitude.

Nonetheless, some netizens say that they still wouldn’t make an order if it’s raining because the action is not only dangerous but threatens the safety of riders.

One netizen shared that he once ordered when it was raining but he gave the rider an RM5 tip and apologised for the inconvenience.

Let’s be more considerate to our frontliner delivery riders, guys! We should try to be more understanding of their situation when the food arrives late. Please leave them a note and give tips to riders to lift their spirits. 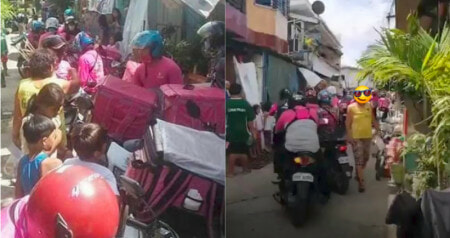