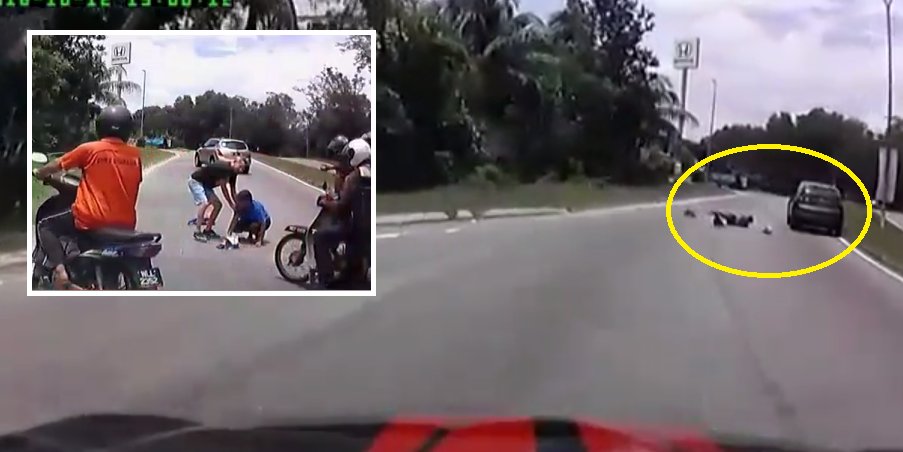 Sometimes we mess up but what’s most important is that we own up to our mistakes and take responsibility, and one of the most despicable and hated things someone can do is, to hit-and-run.

One particular person who did just that was the driver of a Metallic Grey Honda CR-V.

A dashcam footage contributed to World of Buzz by Mr. Liew revealed that the irresponsible driver had tragically crashed into an Indian lady, but then it sped off!

The incident took place just outside of the Honda Showroom in Sungai Long at about 12.50PM on October 12. The number plate is W## 232, as the alphabets could not be fully identified.

The grey car was allegedly speeding before the accident took place but the heartless person sped even faster off after hitting the poor lady who seemed to be in her 50’s or 60’s. The impact of the crash threw the elderly lady off her feet while her groceries sprawled across the tar road.

Even though Mr. Liew honked at the grey car, the person drove off without a second thought. Seriously, it’s a wonder that some people are this heartless. What if the lady was severely hurt???

The Honda CR-V had fled the scene.

The lady can be seen already crossing halfway through the streets before the car crashed into her.

“Either the driver was playing on phone or have no license, because there is no way he couldn’t see the pedestrian crossing the road.”

Many passersby were kind enough to come to her aid. 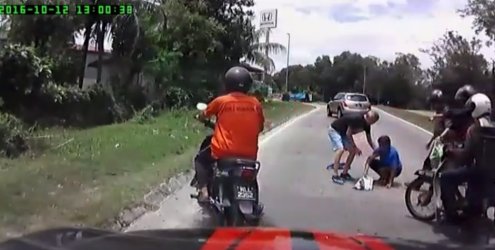 The pitiful lady was struck so precariously, it was a miracle she only sustained minor injuries such as scratches on the toes. However, Mr. Liew suspects that her injuries could be worse than what can be seen.

“If she didn’t go check up, she may suffer internal bleeding at any time,” he says.

Watch the video of the horrendous incident here:

If anyone has got any information, please do inform your nearest police station. If you don’t know anything, please help share this article in hopes of finding that reckless driver. But seriously, don’t hit and run.