As painful as it is, people in relationships or marriages get into secret affairs more often than we care to admit. What made this one different, however, is that the person the woman was cheating on her boyfriend with turned the tables on her and made her life a living hell!

A Terengganu student, who is currently pursuing her studies in an Ipoh university, met her new flame, who is a foreign worker from Bangladesh, via WeChat in August last year (2018). Even though she was already in a relationship with a guy from her hometown, the affair between the 20-year-old woman and the man developed rapidly. According to China Press, he would regularly fetch her from her campus for meals, give her an allowance, and eventually, have sexual intercourse with her. It is believed that around this time, he started taking explicit photos of her sleeping in the nude.

However, things soon became sour after the student and her secret lover broke up as the consequences of her infidelity lingered. Her ex-lover threatened to circulate said nude photos of her and started to blackmail her. That’s not the worst part, she also reported to police that he had forcibly taken her to an apartment in Setia Alam (Shah Alam) and held her there against her will.

For illustration purposes only | bluescope

Once her former lover blackmailed her with the photos, the woman was forced to meet him face-to-face. It was there and then that he forced her into his car, and kidnapped her to Setia Alam! Yes, if you’re still following, that means he drove her all the way from Perak, which was at least a two-and-a-half-hours-drive. That’s a lot of effort to put into committing a crime.

When they arrived at the apartment, he tried to prevent the woman from escaping by claiming that his car had been loaned to a friend of his, so there was no way she could get away. That was the beginning of her kidnapping, which lasted for one whole day. While she was there, he even attempted to strip and rape her.

Nonetheless, the woman put up a good fight, and luckily for her, her attacker not only relented, but even brought her back to her campus! That’s really fortunate!

The trauma of the event shook the woman to her core, and she ended up coming clean to her boyfriend and told him that she had cheated on him, who urged her to lodge a report. It is learned that she has since checked herself into a hospital, and the police have successfully captured her ex-lover.

It may seem like a plot right out of a movie, but sometimes real life is just that chaotic and surprising! If anything, we hope that the woman is fine and it’s best to always be true to your partner!

Also read: 22yo Student Commits Suicide at Penang Condo After She Fails Her Exams & Cheating BF Dumps Her 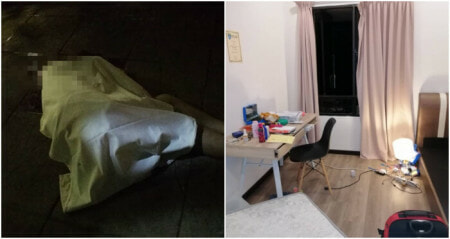