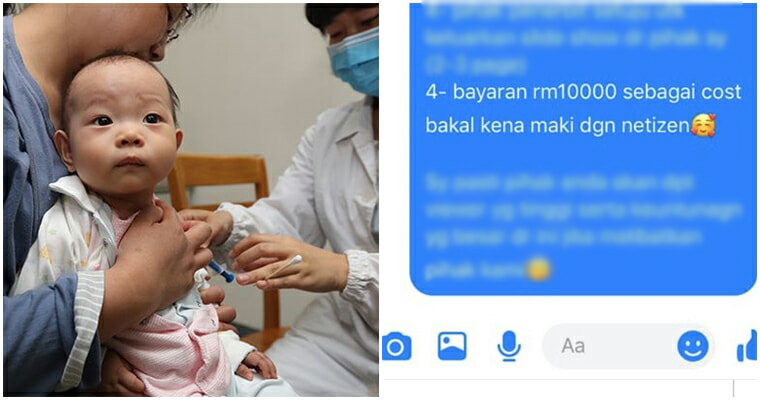 The polio disease is back in Malaysia and the public is getting restless over the anti-vaccination trend that has insidiously crept into Malaysia. We know that anti-vaxxers exist among us, and their actual beliefs are a hot topic of debate among netizens. Sensing a story, the media are hoping to get a scoop on these people, and it would be even better if they could have a whole debate session with them.

Which is why a TV Al-Hijrah representative reached out to a alleged anti-vaxxer, Mardiana from a Malaysian anti-vaccination Facebook group on whether she would be interested in making an appearance. But, her responses were totally bonkers.

Asrul Muzaffar, who used to be a TV representative, said this of Mardiana’s demands.

“I’ve made numerous arrangements for TV interviews and live appearances for Ministers and CEOs but none of them were as stuck up as this Anti-Vax gang.”

Meanwhile, Mardiana posted on her own social media, “An invitation from TV Al Hijrah. I’ll just charge them RM10k. It’s their loss if they can’t comply.” 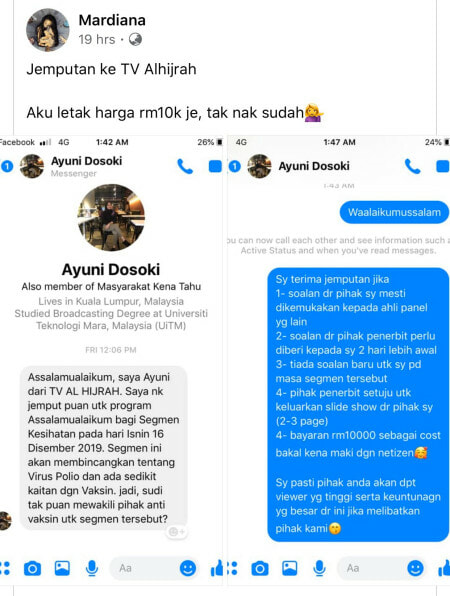 She attached the list of ‘conditions’ that TV Al-Hijrah had to agree to in order for her to make an appearance to the post, and they’re quite frankly mind-boggling.

“I will accept this invitation ONLY IF…

1. The questions from me will be answered by all of the panellists.
2. The questions for anti-vaxxers must be given 2 days before the segment.
3. No new questions will be directed at me during the segment.
4. The producers will agree to allow me to show my slides (roughly 2-3 pages).
5. A payment of RM10,000 as compensation for the expected public criticism.

I am sure that your company will gain a lot of viewers and huge profits from this if we get involved.”

Annoyed by this, the public expressed their thoughts on the demands.

“Obviously, you can’t ask a new question on the spot since there will be multiple cameras recording her, so she can’t Google for an answer to counter-attack with. She would kantoi.”

“On a serious note, why would you be so scared to receive questions on the spot? Pure anti-vaxxers were supposed to be super knowledgeable to counter impromptu questions.”

Well, obviously she won’t attend be attending the panel. What do you think?

Also read: You Can SUE Anti-Vaxxer Parents In M’sia If Their Un-Vaccinated Kids Infect Your Own 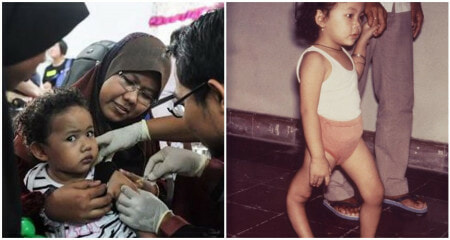