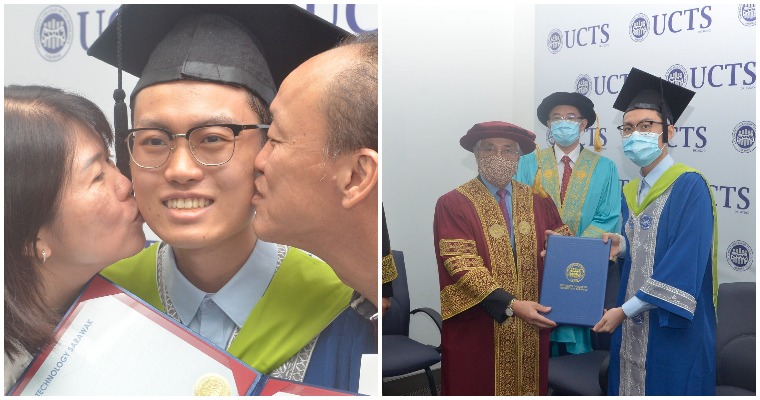 Life is always full of surprises. But sometimes, it’s not always good.

On Tuesday (18 August), the University College of Technology Sarawak (UCTS) conferred its first aegrotat degree (Bachelor’s degree in Quantity Surveying) to Phu Joon Meng, a 23-year-old student, suffering from a stage four malignant brain tumour. This degree is presented to candidates who are unable to complete their studies due to serious illnesses, according to The Borneo Post. After graduating with a Diploma in Quantity Surveying, Phu continued with his studies at the Sibu campus back in April 2017. He was a Taekwando black belt instructor, actively helming the Taekwando club. Yet, he couldn’t escape from the sickening fate of being diagnosed with a stage four malignant brain tumour, the most cancerous version. In fact, he was already in his last semester (May 2019) when he discovered he had the deadly disease.

“When I received the news from the doctor that something was growing in my brain, I felt my whole world had collapsed,” he shared to New Sarawak Tribune.

The growth of the brain tumour was confirmed when Phu went for a second opinion in Kuching. He had to halt his studies to receive the treatments in Sarawak General Hospital. He underwent the surgery and it was quite successful at that time. Things felt as though they were back to normal. He proceeded with his studies in February this year after resting for six months. Many lecturers were touched when they learned that Phu was actively engaging in online lessons despite constantly having to go to the hospital.

The cancerous cells did not give in. They spread to other parts of his body. Chemotherapy treatments were not helping and he started suffering from the side effects – dizziness, headaches, nausea, insomnia, and loss of appetite. It was emotionally stressful for him as physicians told him the best way to handle the current situation is to stop the treatment and to enjoy the rest of his days.

This is so… heartbreaking. “This special person who we are celebrating today, despite being very ill, he is very determined, worked extremely hard, and was so committed towards his studies,” UCTS Vice Chancellor, Prof Datuk Dr Khairuddin Ab Hamid said at the ceremony.

Thus, it didn’t take long for the approval to come upon. “I want to create more memories with my parents and my brothers before I leave the world.”

Along with him at the ceremony were his parents – Phu Sek Ann (57) and Yah Lee Yuen (52). They were very grateful for UCTS’ efforts to award their son with this special degree.

“I am very appreciative and thankful to UCTS because they came all the way from Sibu to organise this ceremony just for me,” expressed Phu.

He also added that health is very important and one must not take it for granted.

Thank you for being a bright star, Phu Joon Meng. May the rest of your days be filled with nothing but pleasure and happiness.