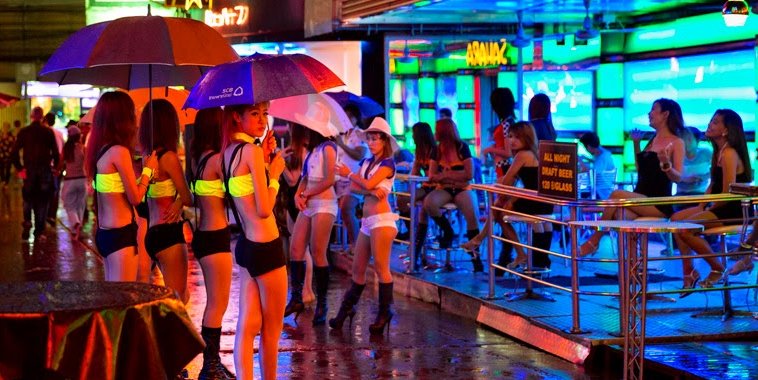 We’ve all heard about men going for a ‘happy ending’ massage, but possibly never for a lady! Until now that is.

London local Jaine Thompson (not her real name) had been rather curious about the infamous ‘Happy Ending’ massage in Bangkok which she heard about during her 3 year stay there from her guy friends. At the time she had a live-in boyfriend so she never really got a chance to explore on this curiosity.

However, recently she went back to Bangkok – single and ready! So you know what’s up lah.

But wait, there’s a slight hiccup! While us dudes are presented with a literal buffet of choices in any red light district, it’s a little bit more tricky for the womenfolk!

“I’d never heard of other women doing it but I had a lot of male friends who went. It’s everywhere and it’s so accessible to blokes, it didn’t really occur to me that it would be hard to get for women,” she said.

“I was on Soi 33 with some guy friends. I hadn’t picked which massage place I wanted to try yet but I knew I was going that night, that’s why we were on that street.”

“I imagined the massage, some [breast] fondling, some bum stroking and she’d get me off. If I had expected anything, it was a massage first and foremost and secondary was this…additional bonus,” she said.

“I went to the first place and they were like, ‘Oh sorry, madam this is special massage,’ and I said, ‘Chai. I know. Can I get one?’ They looked dumbfounded, like ‘Huh?’ and said, ‘Oh no, woman cannot,’ in this judgemental tone, like a slap in the face.”

“At the second place I tried, I assured them that I knew they only offered ‘special massage’ and asked, ‘Women dai mai ka? (Do you service women?)”

“They were like, ‘Oh…dai,’ like it’s questionable but okay. They had to go into the back and check if someone was there. None of the other girls could do it apparently. Or didn’t want to, which is fair enough.”

“That’s when it dawned on me, ‘Oh this might be a thing, places might just not service women. It had never occurred to me.”

“Anyway, that place turned out to be cash-only and I didn’t have enough. I went to a nearby cash machine but it was empty. I thought, ‘You know what? That’s a sign, I’ll try one more place. If that’s not it, I’m not gonna keep trying.”

“By the third place I had my checklist and was feeling like a pro: ‘Yes, i know it’s a special massage,’ ‘Can you service women?’ and ‘Do you take credit cards?”

“Then, boom! Out walks this big lineup of girls and I’m supposed to pick one. I just hadn’t expected that. I mean, when you go for a normal massage you don’t pick the masseuse, they just give you whoever is free.”

“But here are all these girls in front of me and the penny’s dropping. I mean, I’d seen it on Soi Cowboy but now they were doing it for me, not for the table next to me, it was different.”

“I couldn’t look any of them in the eye. The madam was like ‘Pick the one you like’ and I was like, ‘Um, they all look lovely, can you just recommend one?’”

“We went into this sparse little room. It had a mirror, a single bed pushed up against the wall and a shower stall at one end.”

“She told me we need to take a shower and took her clothes off. She didn’t strip in a sexy way. We just got undressed and got in the shower and she washed me. It wasn’t really doing anything for me. She was gorgeous and sweet but there was a serious lack of sensuality.”

“I think it would have been sexier if we could wash each other but she was just washing me, which I didn’t find sexy. I didn’t know if I could wash her back. I wasn’t just going to try and touch her and get thrown out.”

“Sex to me isn’t about being serviced, it’s a two-way act and that’s what fun. Even when I have a one-night stand, I make it sensual. I couldn’t do that with her because I didn’t really know what I was allowed to do.”

“I was thinking, ‘Ok, this isn’t what I wanted. I wanted to be coyly gotten off, not clinically washed.’”

“Also, there’s no aroma scents, I just want to flag that. If these guys are reading this, I could have done with some aroma scents. There’s nothing like that. It’s not inviting. I was down for some eroticism, that’s what does it for me, not just the act itself.”

“There was very little eye contact and we chatted about her son in Isaan, which made me think that I probably shouldn’t have initiated small talk, but I was nervous. I wondered, ‘If I was a bloke, would she have told me the same things?’ Anyway, that shattered the illusion of it being sexy even further. That sparse room is just that and you have just paid money to do god knows what.”

“We moved from the shower to the bed. The massage was very basic. Actually, it was like no massage and five bottles of baby oil. I thought the main part of this act was supposed to be a tantalizing massage, like high up into your thighs and sensual.”

“To be honest, a Thai massage and some dry humping would have been better than what we did.”

“I wanted it to be cheeky, like ‘oops’ when their hand slips between your legs and they say, ‘Okay, ka?’ you can be all like, ‘Oh! Well…I guess ka.”

“Like she would ask, ‘Would you mind if I stick my finger up your ass, ka?’ and I could answer, ‘Well, I’m not sure… I guess so…Can you actually move it up a notch?”

“So, after she oiled me down, she turned me over and there was some [breast] rubbing and more touching. I can’t really remember all the details but pretty quickly it just became sex. She was licking me and I was licking her. Fuck knows if she liked it.”

“We were top tails and I kinda got into it for about five seconds. Again, not her fault. The whole thing was just too real for me, I was just too aware of what was going on. And it did lack sensuality, which is my drug. You’re just super-aware of this shitty little room and the circumstances.”

“We went at that for about an hour. I didn’t feel like she knew what to do with a woman. I gave her a little direction but it wasn’t really going anywhere for me.”

“I realized that this girl was recommended to me but that didn’t necessarily mean that she likes girls, and may have never been with one before. That made it even more like, ‘I know it’s just a job at the best of times but what if she’s totally not into girls?’ At least when a girl is with a guy you can often assume she does like men, even if not that particular one.”

“After about an hour she said, ‘Have you come? Tell me when you’ve come? Are you okay?’ She was very sweet. I said, ‘Yeah yeah, I’ve come’…which I hadn’t. I didn’t finish but I told her I had.”

Jaine mentioned that the whole thing lasted about two hours. When they left the room, they were the last people in the place. It was about 3am.

“So, it was what it was. I didn’t find it sexy or sensual. But I’m kinda glad I did it. I’m liberal when it comes to sex. I’ve been paid for sex so that part of it doesn’t really bother me. I’ve only been paid once so I can’t relate to women who have to do it for a living.”

“You know, I’m not a bloke who’s desperately unhappy or can’t sleep with anyone and this is the only way he can do it. I like experiences, even the frustrating and embarrassing ones. They’re a bit fascinating for me afterwards.”

In the end, Janie was glad she tried a ‘happy ending,’ after imagining what it would be like it for so long.

However, she said, “I’ve got zero interest in trying it again.”

Well if you’re interested Jamie, head on over to Malaysia! IMBI and Chow Kit are damn happening! Well, not that I’d know at least!