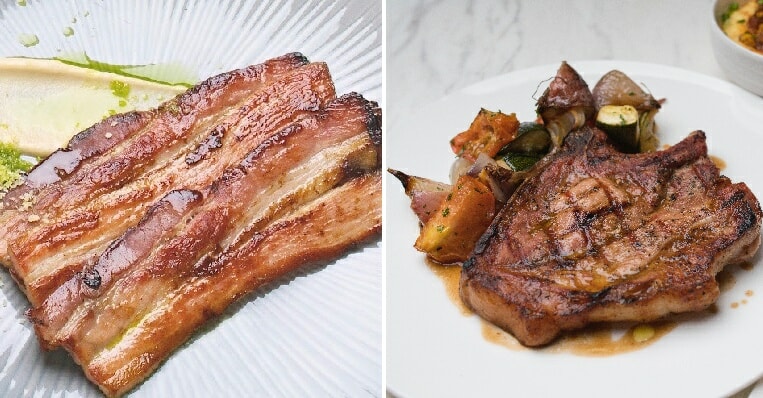 This is for the non-halal peeps out there!

Many of us are used to eating beef steaks but did you know that pork meat makes equally good steaks? There are not many places where you can find pork steaks in Malaysia but one of the pioneers in this industry, ANTE invited WORLD OF BUZZ over and fed us some juicy, thick and tender pork steaks so that we could taste the difference! It’s TOTALLY different from pork chops! 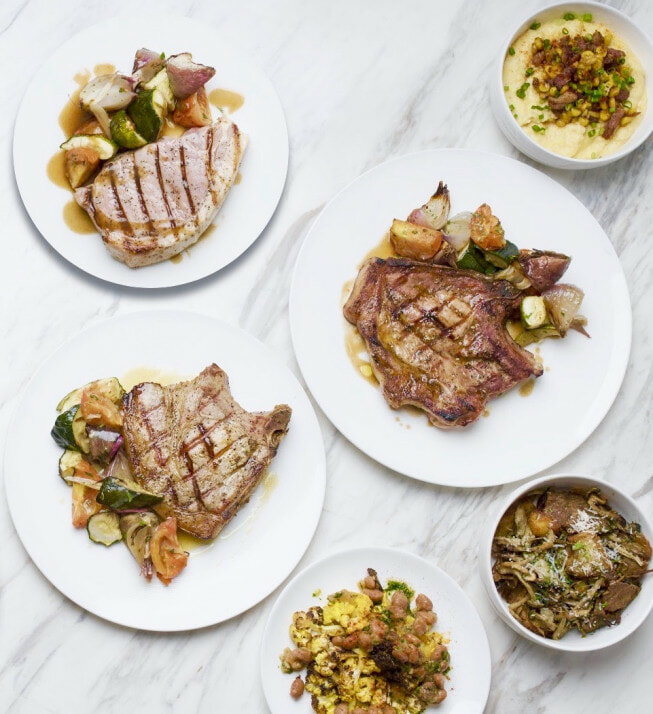 Unlike pork chops, the meat here are officially called steaks from its cut and weight.

We were treated to the three types of pork steaks available at ANTE, plus a few other porcine delights which were a truly enjoyable experience for us. Their steaks are quite hefty so you know you are getting value for money here and definitely won’t leave the restaurant hungry.

We were given some sauces too but we were encouraged to eat it on its own. PS: Their steaks are so yummy because they go through a 24-hour marinating process! So, here are the different cuts and other dishes we tried: 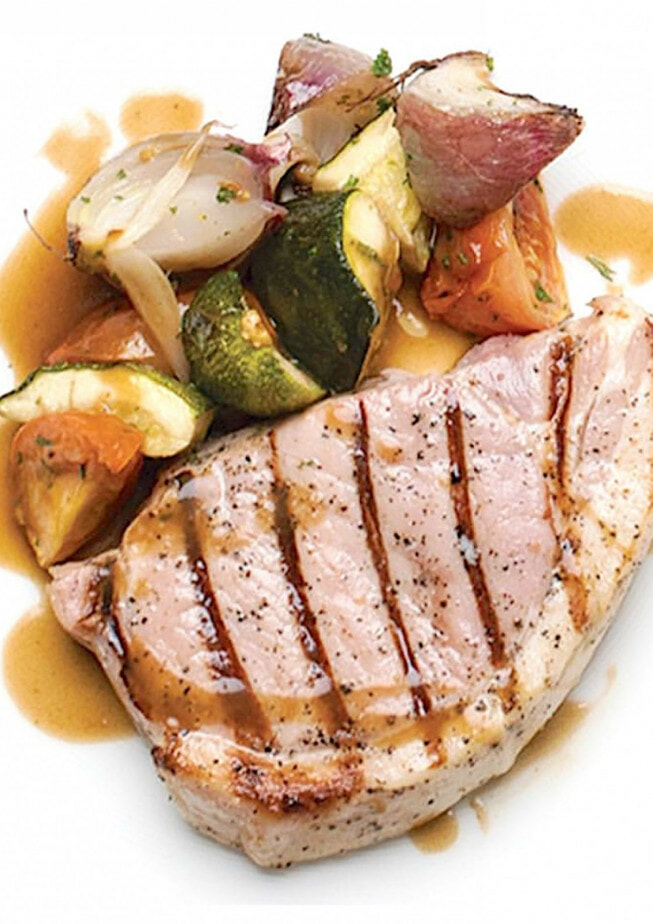 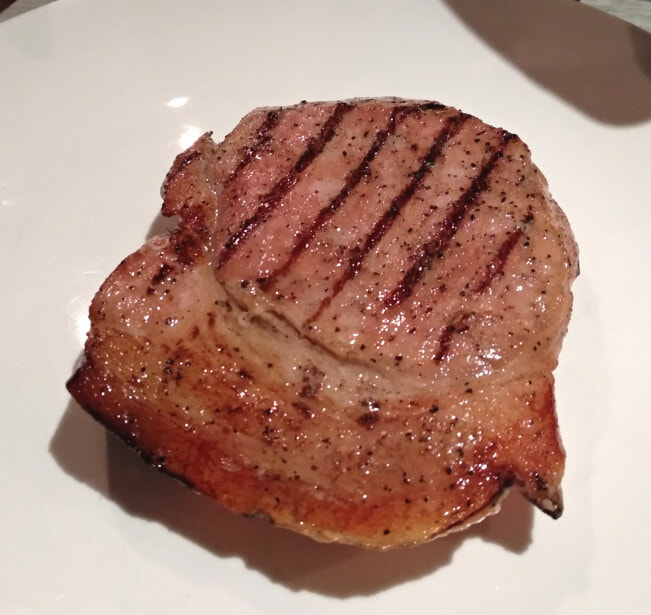 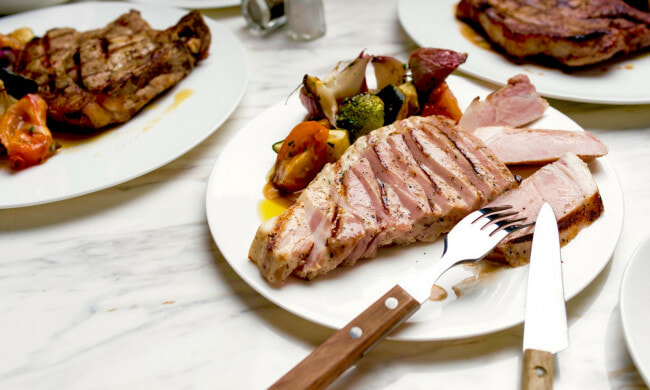 This steak consisted of lean loin meat, which was accentuated with a strip of charred fat to give it that mouthwatering flavour. This is the leanest of all the steaks we had as it consists of 95% loin meat and 5% soft tendons and muscles around the fat cap. It is less marbled but is perfect if you don’t want to deal with bones!

Chloe: “I didn’t know pork could taste so tender and juicy until I tried this. The fat from Ante’s pork loin had a bit of chew to it and you could taste the original flavour of the pig. It was soooo good!”

Ling Kwan: “A piece of lean meat with hardly any fat and yet they managed to turn it into a juicy cut of meat. The porky, meaty taste is more pronounced in this cut compared to the ribeye and shoulder cut.”

Michelle: “The meat was a little chewier because of the muscle. Not my favourite, but I can imagine people who are taking care of their diets go for this one.”

Pui Fun: “Although it was slightly tougher than the others, it was very tasty and flavourful. As it has lesser fat, I felt less guilty after eating it too!”

Tara: “This was the toughest cut of meat that we tried that day, but I really loved the flavour of it!” 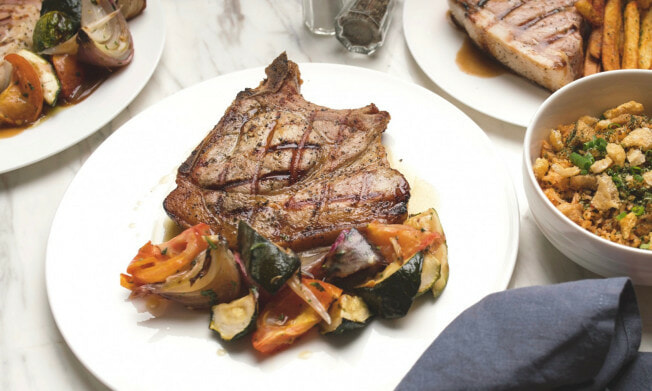 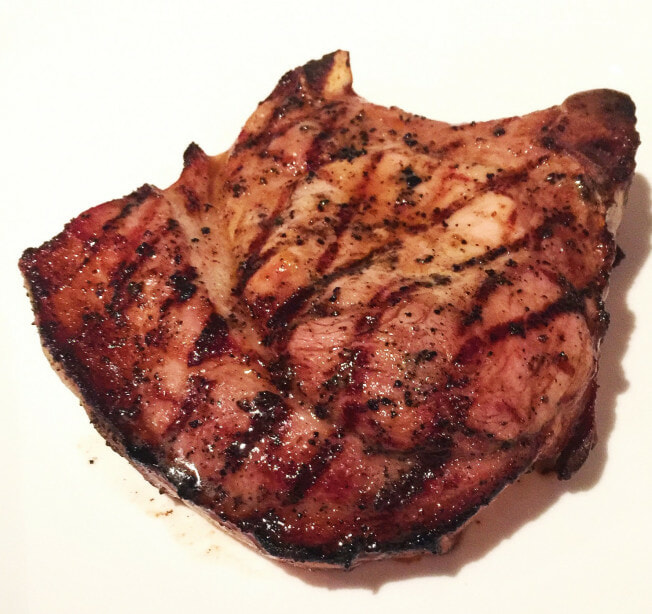 Up close and personal! | source: wob

The ribeye was a little more decadent than the pork loin as it had more fat on it and some bone too. The composition for this steak is 40% marbled loin meat and 60% tender dark meat with a nice coast of fat cap that contributed to the smoky chargrilled taste.

Chloe: “The ribeye had a thin outer layer of fat and plenty of meat. Some parts were more tender, some chewier, so I felt that offered the ‘full experience’.”

Ling Kwan: “The meat is noticeably juicer and more tender than the loin. It hits all the right marks in terms of juiciness and texture.”

Michelle: “Delicious! Especially the side strip of fat, which melts in your mouth.” *salivates*

Pui Fun: “This went down much easier and was super yummy as well. The meat was so tender that you can just cut right into it without much fuss.”

Tara: “This is a nice in-between if you’re looking for something that’s softer to cut through with a bit of chewiness to it.” 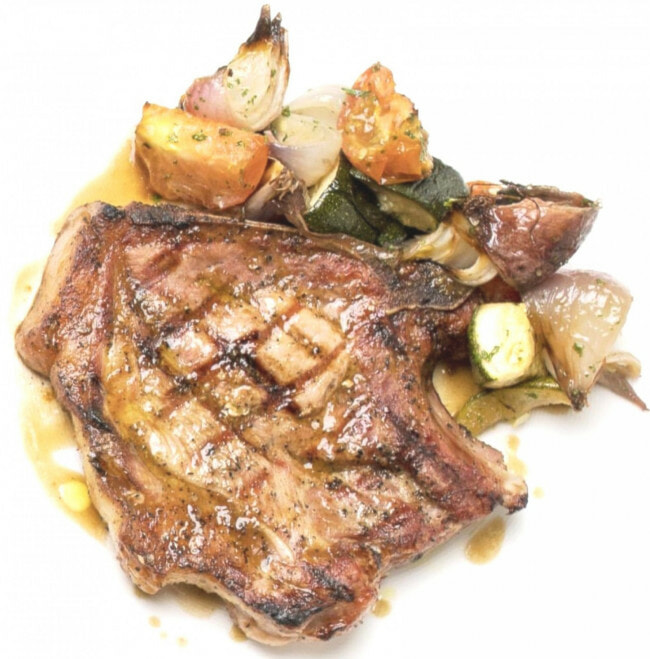 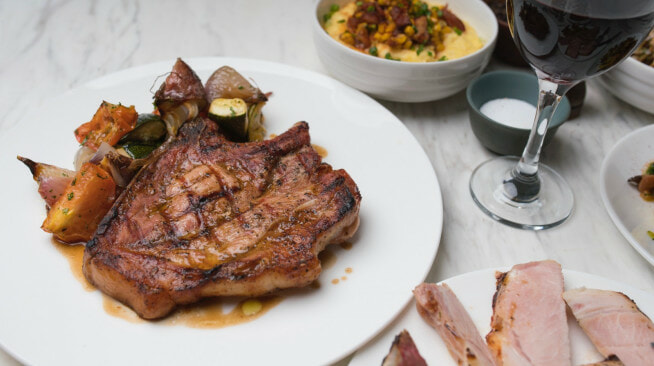 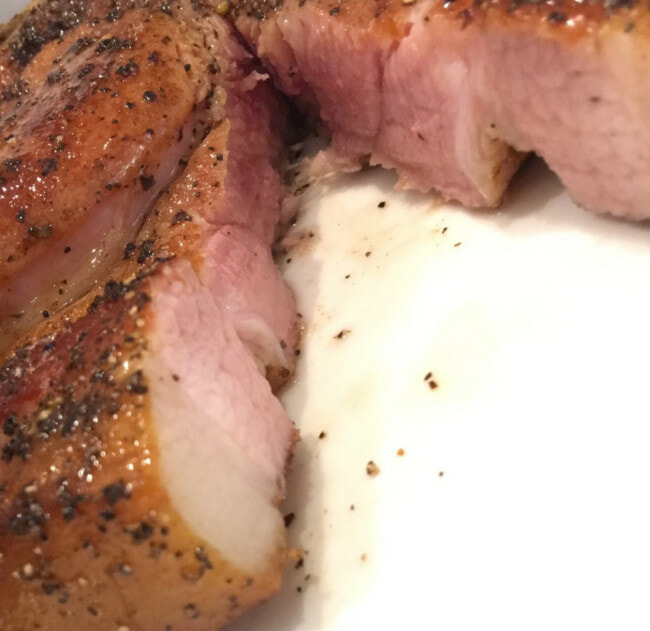 We were told before we sunk our teeth into this steak that it was the most tender amongst the three steaks we had. Plus, it was also the juiciest as it had 10% loin meat and 90% of mostly tender dark meat, which makes the texture buttery-soft.

Chloe: “The shoulder came with just a bit of bone and it had the perfect balance of meat and fat. I could really enjoy its natural flavours enhanced with salt and pepper.”

Ling Kwan: “You can effortlessly chew through the meat, and the muscle fibre and fats just disintegrate in your mouth. It’s super juicy and tastes good on its own.”

Michelle: “This was the one for me. A good amount of fat with the meat, and an amazing burst of flavour!”

Pui Fun: “This was the best pork steak I had the whole night. It was like cutting through butter and the steak just melts in your mouth. I would definitely recommend getting this if you are only choosing one steak.”

Tara: “So tender! The meat is so easy to cut through and it just dissolves in your mouth after a few bites. I love that you can taste the natural flavour of the pork as well.” 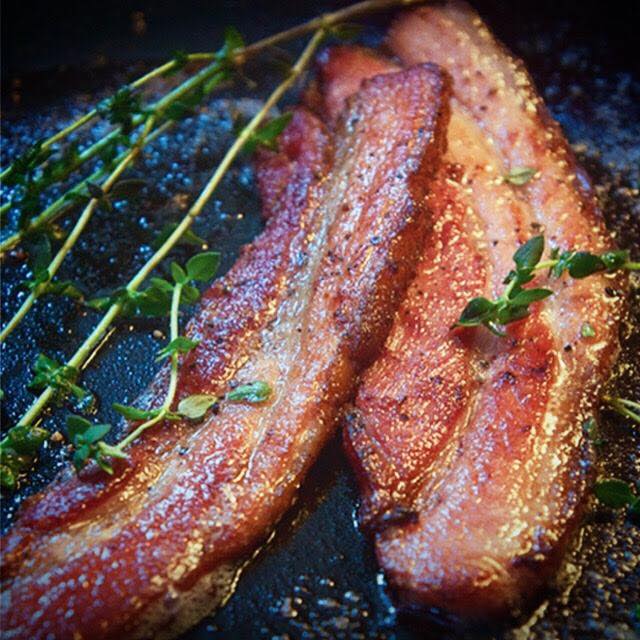 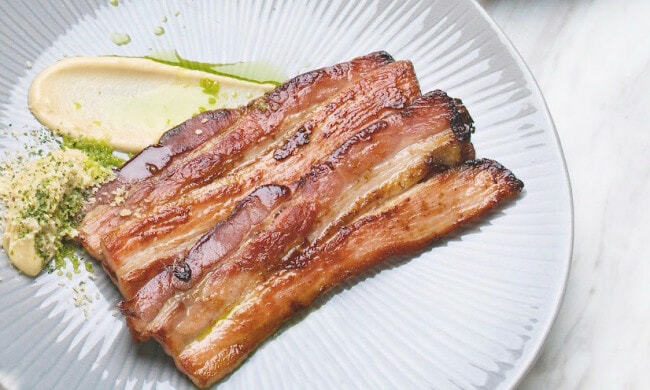 This house-smoked bacon starter has been frequently lauded for its thick strips that are both crispy and chewy. The bacon is served with some smooth apple-onion cream and is infused with parsley oil to ensure that you will keep wanting more of this awesomeness.

Chloe: “I usually have my bacon thin and crispy but ANTE’s version was thicker and softer. I could actually taste the pork itself and not just the salty and burnt bacon taste that you sometimes get.”

Ling Kwan: “Ditch the apple-onion cream and breadcrumbs as the bacon alone is delicious enough. A tad too thick and not crispy enough on the outside (for my liking at least); it almost tasted like a piece of char siew.”

Michelle: “Tasty and tantalising to the taste buds especially with its thickness.”

Pui Fun: “Bacon is one of the best things you can eat and this was even better as it was thick, crispy and smoky.”

Tara: “You can really taste the smokiness of it (since they smoke all of their bacon in-house). As a bacon lover, I approve!” 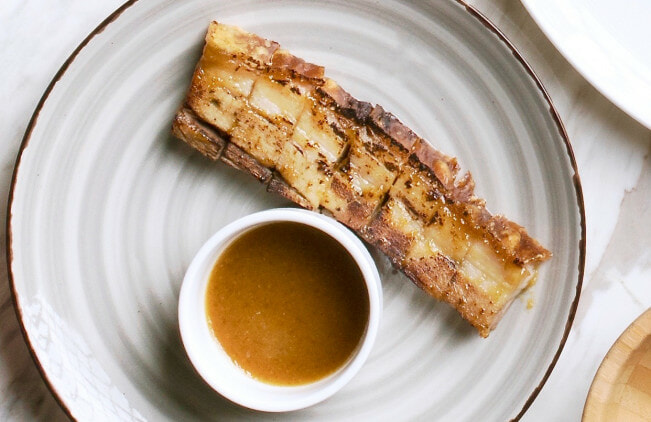 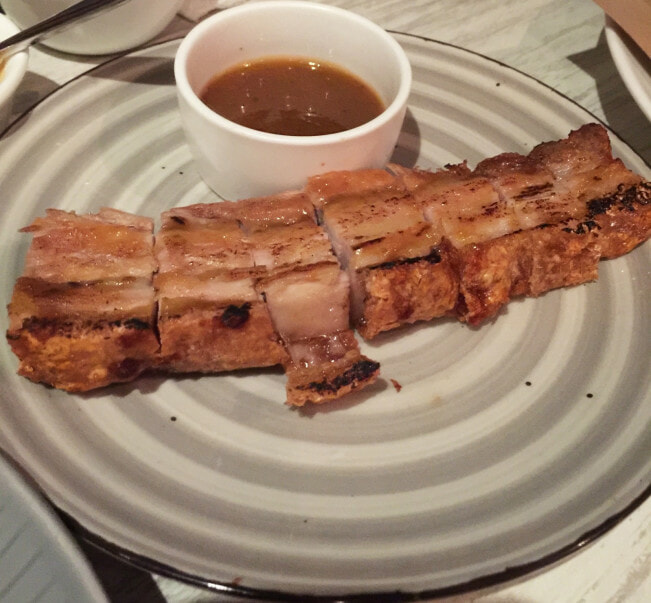 Another signature starter, this crunchy and juicy pork belly is way better than the regular siew yuk that you find outside. It’s infused with miso and yuzu kosho for a subtle depth that will make you salivate!

Chloe: “When it comes to siew yuk/pork belly, I don’t usually like the bottom parts as the meat there tends to be dry. But ANTE’s pork belly tasted good from top to bottom as it was tender, juicy and crispy.”

Ling Kwan: “The skin is way too crunchy and it’s not salty like the way we’re accustomed to. Could be cut into thinner chunks so that more people could get a taste. The sauce adds good flavour to the pork belly.”

Michelle: “5/5 would recommend this! It is perfectly charred, and the fat literally melts in your mouth. So. Good.”

Pui Fun: “I absolutely love siew yuk and this pork belly is so good with its crunchy skin and flavourful meat. Drooling just thinking about this!”

Tara: “I love that it isn’t as salty (as most siew yuk dishes usually are). They nailed it with the crispy skin and melt-in-your-mouth fat too!”

Have we got you drooling for these delectable porky dishes already? If you want to pay ANTE a visit, do note that they have two outlets in Malaysia and both are just as good! Here’s where to find them:

Now, are you tempted to check ANTE out if you haven’t already? Don’t forget to jio us when you do because we are STILL dreaming about those tantalising pork steaks!

Also read: Creepiest Speakeasy in Petaling Street Has 10 New Awesome Drinks You CAN NOT Miss! 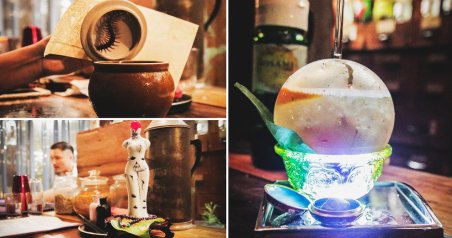