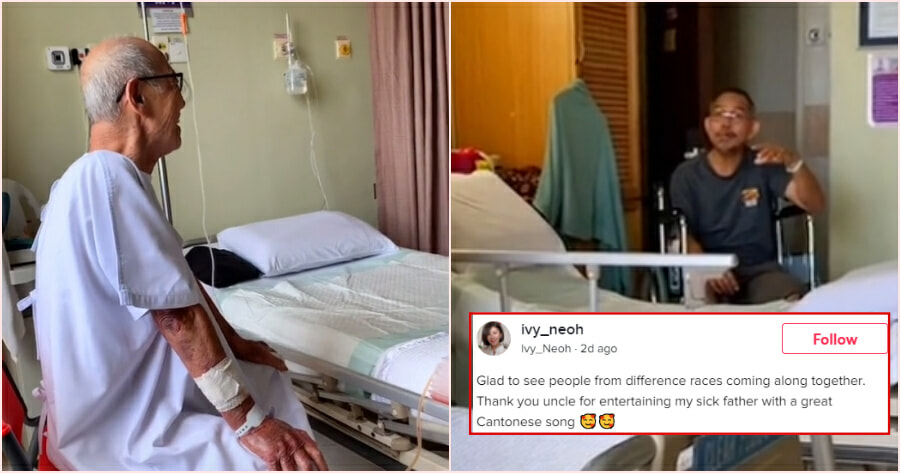 Language is key in ensuring that people feel more connected to one another. When one chooses to learn a new language, it can often promote a sense of unity and lead to a feel-good factor in general.

In the past, we have featured numerous accounts of Malaysians who have brought together a sense of unity and community by embracing and learning a new language. From a TikTok video which featured a Malay woman’s proficiency in Tamil as well as a Malay Mak Cik who learned Cantonese and Tamil in order to talk to her neighbours.

This sense of community was recently shown off via a TikTok video posted by Ivy Neoh which featured a Malay uncle singing a Cantonese song in order to entertain a Chinese grandfather who was staying in the same ward.

@ivy_neohGlad to see people from difference races coming along together. Thank you uncle for entertaining my sick father with a great Cantonese song 🥰🥰♬ original sound – Ivy_Neoh

In the video which featured a stellar performance by the Malay man, Ivy wrote, “Glad to see people from difference races coming along together. Thank you uncle for entertaining my sick father with a great Cantonese song.” 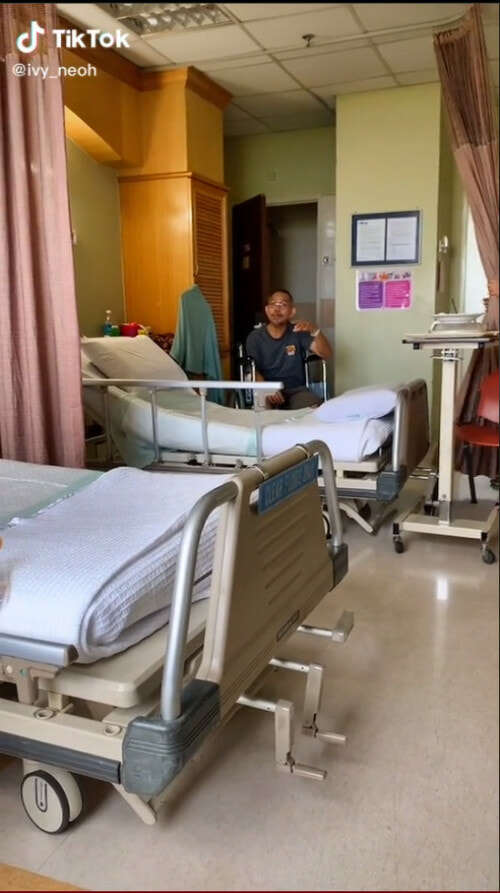 When contacted by WORLD OF BUZZ, Ivy referred us to her son, Jensen who explained that his grandfather was admitted into Kedah Medical Centre on 5 October to remove a tumor in his colon. He was then put in a ward with a random wardmate who he had never seen or spoken to.

“My grandfather had no idea who this guy was and as they started chatting, the Malay grandfather suddenly decided to sing a Cantonese song for my grandfather to cheer him up.”

“It was to also show my grandfather that he can speak Cantonese as well,” said Jensen about the Malay man.

Jensen said that his grandfather was delightfully shocked as he never expected a person who is not Chinese to be able to speak and sing in a Chinese dialect.

“My grandfather was discharged a few days ago. But my mother has kept in contact with the Malay uncle’s daughter, Bella,” added Jensen. 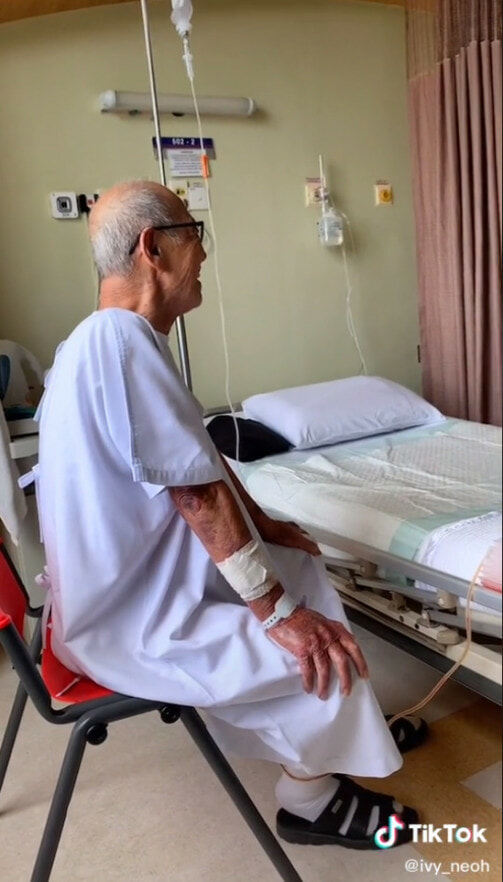 The power of language to unite Malaysians

The video had garnered plenty of attention from Malaysians and currently sits on over 190,000 views and over 22,000 likes. Malaysians were quick to flood the comments section of the video to express their joy after seeing the video. 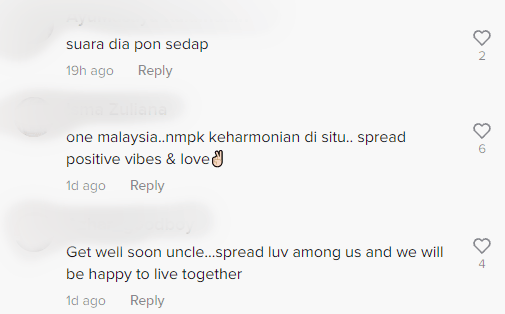 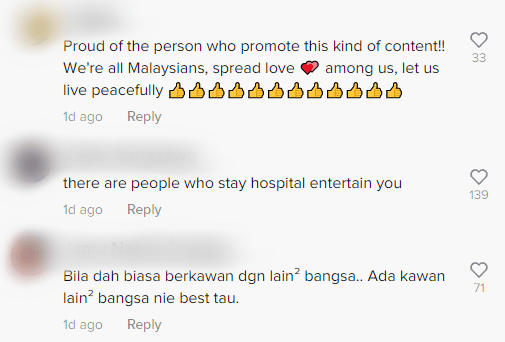 Another said, “I feel so proud when I saw this. Hopefully this sense of unity and peace remains even in the next generation.” 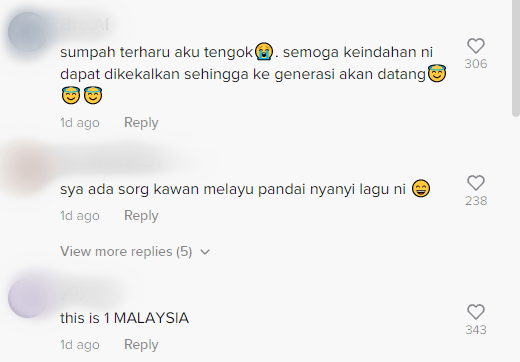 Funnily enough, the video even managed to reach the Malay uncle’s son, who commented on the post. He said, “Lahh, this is my father who had just gotten into an accident recently.”

Ivy then proceeded to send her regards to both the uncle and his daughter whilst the uncle’s son sent his regards to Ivy’s father and wished for his full recovery. 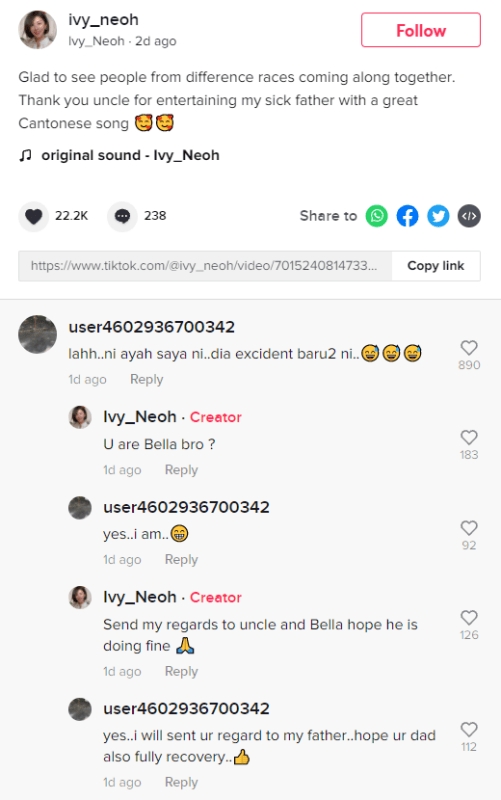 Ivy has also posted a second video of the Malay uncle, this time showing how he had come to her father’s bedside and prayed for his health before he was discharged.

“He even said that he will pray to Allah everyday until my dad fully recovers.”

“You’re the best uncle, may God bless you,” said Ivy. 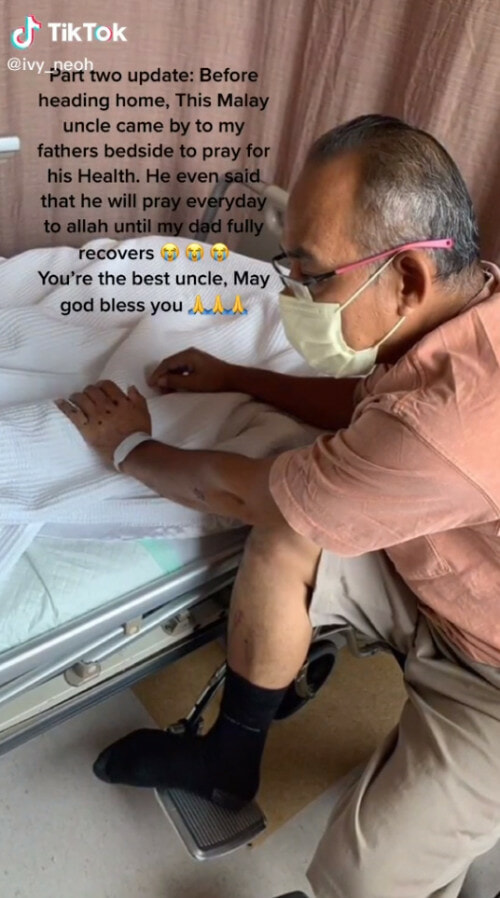 We hope that we get to see more and more instances of such unity, love and care in the future. To both uncles, we wish you the speediest of recoveries and best of health. Thank you for making us smile. 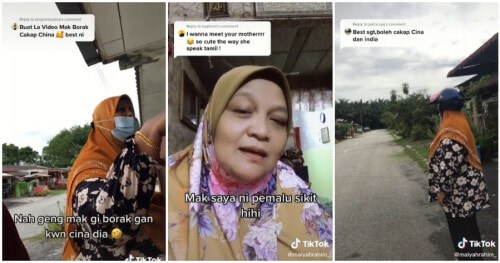