Mount Sinabung in Sumatra, Indonesia erupted on Monday (10 August) at about 11.30am, spewing clouds of ash and grey smoke 5,000 metres into the air. Although no one lives inside the no-go zone around the volcano, small local communities were covered in debris.

According to Fox News, activity in the volcano was detected recently with a few smaller eruptions over the weekend. Thankfully, no injuries or deaths were reported, but warning of possible lava flows were issued by the authorities.

“People living nearby are advised to be on alert for the potential appearance of lava,” Indonesia’s Volcanology and Geological Hazard Mitigation Centre said in a statement.

“The local community and visitors have been asked to refrain from holding activities within a 5km radius of the summit,” it said according to Bernama.

The crater’s alert status remained at the second-highest level. 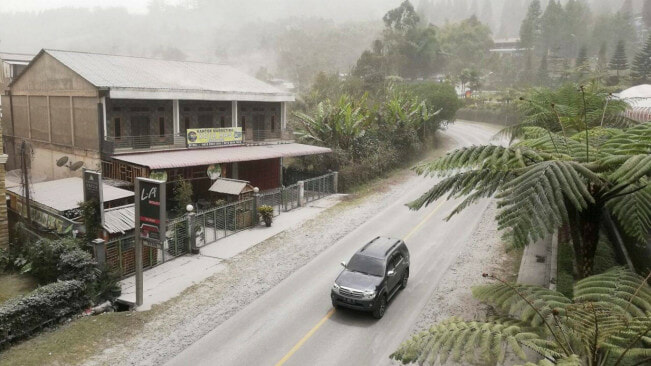 A car drives on a road covered with volcanic ash from the eruption of Mount Sinabung, in Karo, North Sumatra, Indonesia, Monday, Aug. 10, 2020. (AP Photo/Sugeng Nuryono)

As Indonesia is a neigbouring country of Malaysia, ash and dust from Mount Sinabung’s latest eruption were expected to enter Malaysian airspace at the Malacca Straits as well as northern and east coast states of the peninsula on Monday night (10 August), according to the Malaysian Meteorological Department (MetMalaysia).

“This situation can also affect flight operations at an altitude of between 1,500 and 5,000 metres,” he said in a statement today.

However, he added that the situation is not expected to affect Malaysia’s air quality and urges Malaysians not to worry. He said this according to the Hybrid Single Particle Lagrangian Integrated Trajectory Model (HYSPLIT) generated by MetMalaysia and predictions from the Volcanic Ash Advisory Centre (VAAC) in Darwin, Australia.

Jailan added that no earthquakes or tsunami are expected to hit the country following the eruption.

Massive plumes of ash and smoke are rising from the #volcano into the sky. pic.twitter.com/pEWqsIIJbI

Meanwhile, the Air Pollutant Index (API) shows that the air quality in Malaysia nationwide is normal. The public is also advised to stay alert of information issued by METMalaysia through its website, the myCuaca application and social media platforms.

The 2,451m volcano has not erupted since 1600 but became active again in 2010 after over 400 years. It was put under alert level 3 before it erupted again in 2013 and has remained highly active since.

Eruptions in 2014 and 2016 saw the deaths of about 23 people in total, while a volcano between Java and Sumatra islands erupted, causing an underwater landslide that triggered a tsunami which killed more than 400 people.