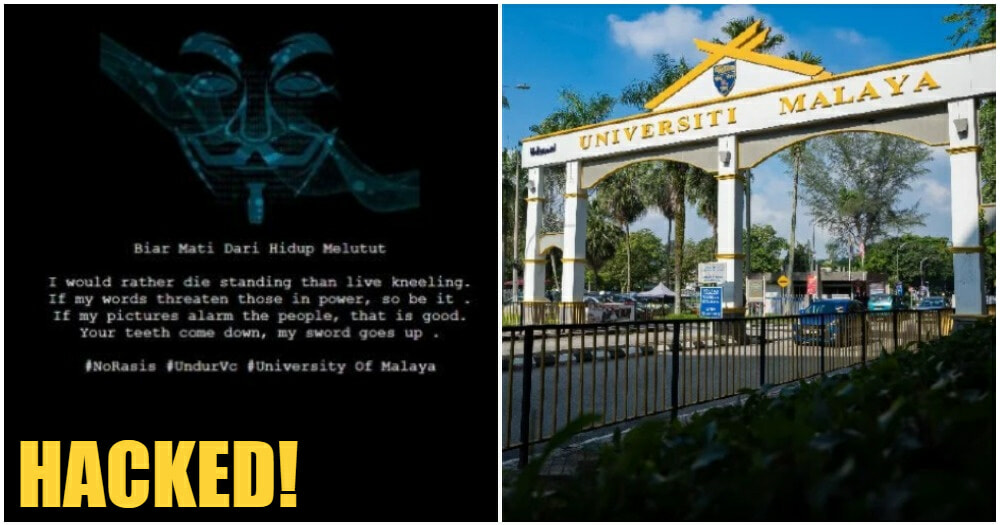 You’re probably aware that the University of Malaya is embroiled in a scandal right now. But if you don’t, basically a graduate shouted and protested on the stage during a convocation ceremony. The next day, another graduate was stopped from going into the convocation hall as he was allegedly going to do the same thing.

After that, multiple statements were made, and netizens were very divided about the whole issue. Some were saying that the graduate should have protested elsewhere but others were saying that he did the most effective thing to achieve his goal of being seen and heard. 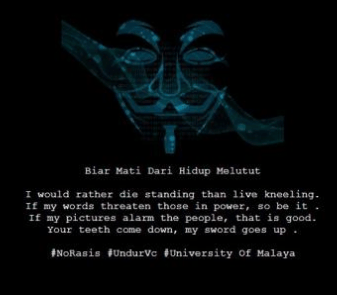 The link, which is located at the bottom of the university’s official website, led to a page which displays a variation of the Anonymous hackers’ logo and shows the words:

(Better to die than to live on your knees)

I would rather die standing than live kneeling.

If my words threaten those in power, so be it.

If my pictures alarm the people, that is good.

Your teeth come down, my sword goes up.”

It is then followed by the hashtags that were used by the youth group going against the Vice-Chancellor.

As of now, the site page has been taken down and the page now shows this:

On 16 October, Tun M has made a statement that the graduate’s protest was not appropriate considering that the event (convocation) is a very formal one. He said that people are allowed to do protests but there are other more suitable places for that.

Kuala Lumpur police chief Mazlan Lazim said the graduate’s actions had violated the graduation ceremony’s protocols and disrupted proceedings. He warned that action would be taken towards anyone that is found to be threatening public order by touching upon racial or religious sensitivities.

Mazlan confirmed that they are investigating this case under Section 504 of the Penal Code.

Wow, this is getting more and more complicated! What do you think about this?

Also read: Netizens Are Calling For UM to Retract Graduate’s Degree For Asking Vice-Chancellor to Resign 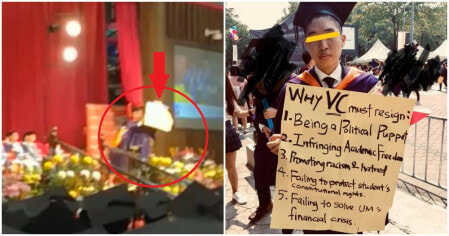