Police have confirmed that the Orang Asli who were killed by a tiger in the incident in Kampung Sau, Pos Bihai, was known as Anek Along. Gua Musang District Police Chief, Superintendent Sik Choon Foo said, they received a call regarding the incident from officers from the Department of Wildlife and National Parks (PERHILITAN) at 1.30 pm.

Prior to the incident, he said, the 59-year-old victim was reportedly processing padi huma with his daughter in the backyard of their house at about 9.10am. As quoted by Berita Harian, Choon Foo elaborated,

Choon Foo said, based on the traces of the blood, the villagers met the tiger before throwing a spear at the animal. The tiger then ran away and the villagers rushed to report the matter to PERHILITAN at Sekolah Kebangsaan (SK) Bihai. The police arrived at the scene at 5.40pm and the victim’s body was taken out using a team vehicle to be sent to Gua Musang Hospital. Meanwhile, Kelantan PERHILITAN Director, Mohamad Hafid Rohani said, a total of 12 staff who were in Kampung Tendrik, Pos Bihai rushed to the scene as soon as they were informed of the incident.

According to him, all residents were instructed to stay in their homes for their safety. At 12.15pm, one of the PERHILITAN staff came across a tiger that was close to the victim and had to open fire because the tiger was rushing towards them.

He said the results of the external examination on the male striped tiger, which was estimated to be three years old weighing 120 kilograms (kg), did not have any trapping marks and only suffered wounds on the face believed to be due to spear wounds from the villagers when they came across the animal. The carcass was taken to the National Wildlife Rescue Center (NWRC) for further action.

Also read: Over 17,000 Livestock & Pets Were Lost During The Recent Floods In Pahang 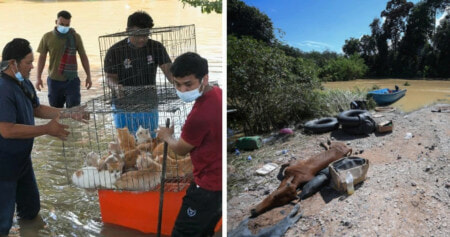