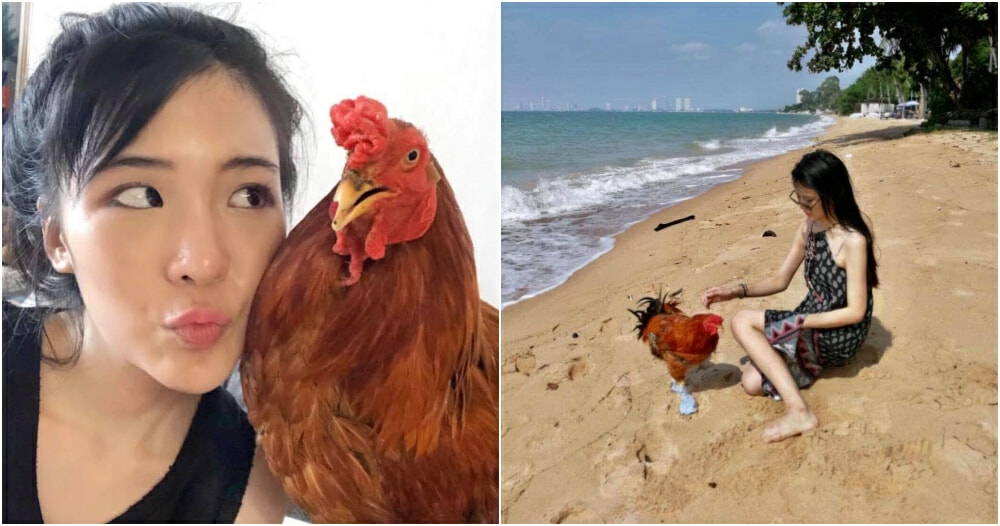 It’s natural for every human being to have a pet as a companion when they’re lonely, but that doesn’t mean you should limit your choices.

Most people now prefer to make pets as playmates, and according to a source, having a pet can help reduce our stress levels.

Some have cats and dogs as pets but we rarely listen to people who have chickens!

Jajah Veganerie is an entrepreneur from Thailand, who owns a pet chicken. Isn’t that interesting? 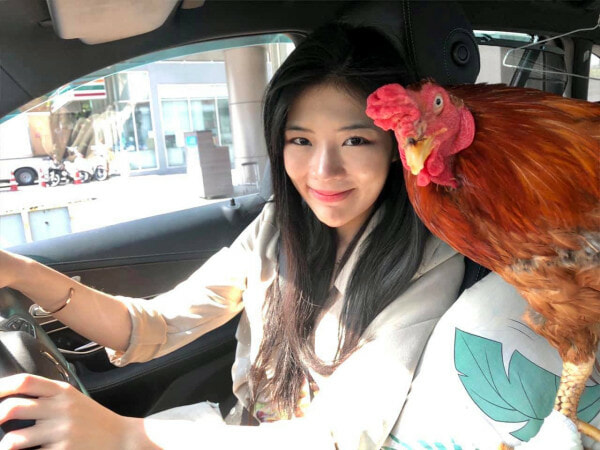 Jajah and Jok going on a car ride

Jajah took to her Facebook page, to answer people who wondered why she chose a chicken as a pet.

She said that her pet is named Jok. He is four-years-old and weighs 4.5kg, which is heavier than a cat.

Jajah said that she started taking care of Jok when it was still young. She found Jok when it was injured at the side of a building in Bangkok, Thailand. No one knew where the little chick came from. However, a man on a motorcycle looked interested in cooking Jok for dinner so Jajah saved him and it’s been her pet ever since! 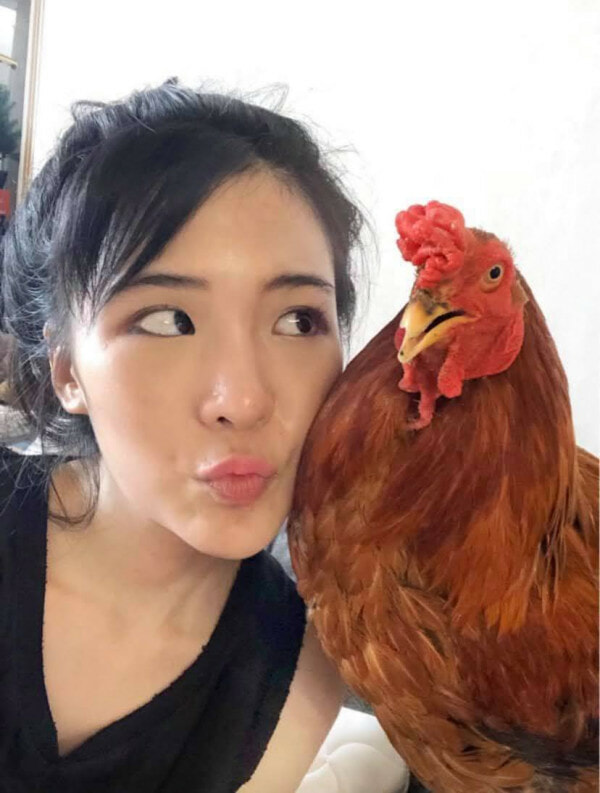 Jok was found by Jajah’s brother when he was injured near Nana Plaza, Bangkok

Jok likes to eat mango, beans, and corn. It is also very fond of car rides. Jajah definitely pampers her chicken by giving him a nice soft futon in front of her bedroom where he sleeps every day.

From having Jok as a pet, Jajah shares that chickens are light-sensitive animals, and Jok will only sleep if his surroundings are dark. Even if there is a little light, it will wake them up.

She added that chickens are social animals and when there are many people around, the chicken will remain calm.

Jajah also shared saying if a chicken pecking means the chicken wants to play and greet someone,

“You should be proud of a chicken approaching you.” she said. 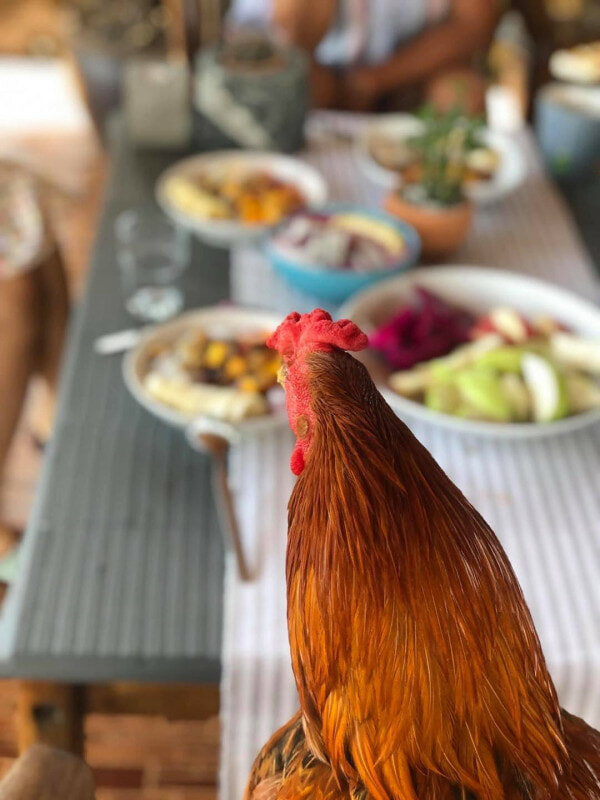 “Many have asked me how I take care of Jok.”

Many wondered how Jajah cleans Jok’s excretion. She said that she did not have any specified technique, she just diligently cleans it. If her chicken was excreting in the car, she already prepared a newspaper as a base and cleaning supplies in the car.

Apart from that, Jajah also bathes her chicken once every two weeks, and she uses human bath soap because she said after bathing, Jok’s feathers would be softer and smell nice. 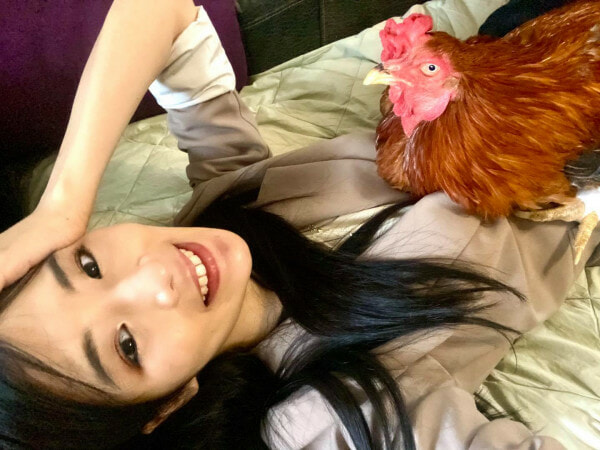 Jajah is glad that she has Jok with her

“Does it hurt when a chicken pecks you?”

Jajah said that it would hurt when Jok pecked at her leg when he asks her to open the door. But despite her pain, she’s happy to endure it. But if Jok wants to ask for food or call Jajah, he will peck gently, and it does not hurt.

You can definitely see how special Jok is to Jajah because she even wraps his chicken feet with a cloth so that they won’t be injured when he walks on wood/cement floors. 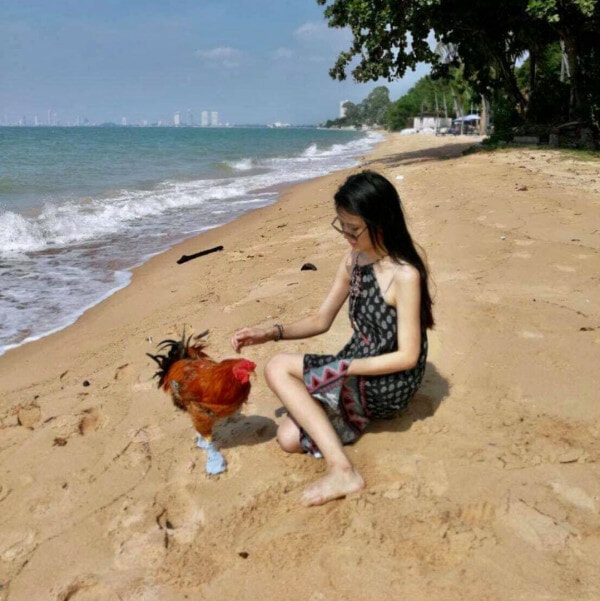 “If chickens are walking for a long time, they will get wounded. Therefore, a soft wrap can reduce shockproof and protect his feet when he steps on various spherical bits.”

Jajah said that she is glad to have Jok with her, and it made her realise that chickens are no different from dogs and cats. They also want to be loved, and therefore, Jajah said she could make her family look more colourful and happy.

What do you guys think of this? Would you consider having a chicken as your pet? Share your thoughts with us in the comments!

Also Read: There Were MORE Abandoned Pets Than Adopted Ones in 2020, Here’s What M’sians Should Know 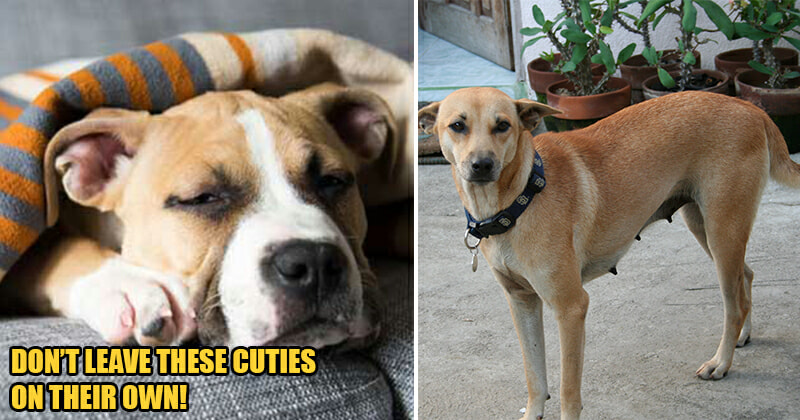