One Facebook user by the name of Jamal Ismail shared the shocking incident of how a security guard harassed his pregnant wife at Johor Bahru’s RNF and that he had beaten up the security guard for doing so. 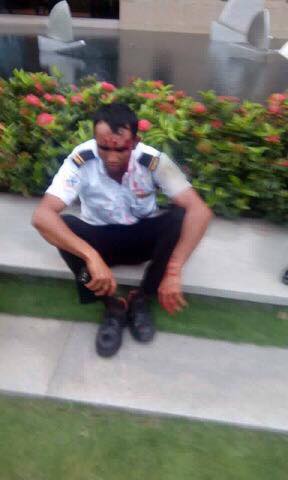 “My wife and her friend wanted to go to the toilet. While in the toilet, her friend was waiting outside. A security guard went in and pushed my pregnant wife while touching his genitals and told my wife he wants to touch her private part.”

Of course, fueled with adrenaline from fear, the terrified lady pushed the security guard away and ran out to her husband, Jamal. When the infuriated man heard of the incident, he immediately ran out to find the perverted security guard.

He looked for him according to his wife’s description, and after confirmation from her that he was the said pervert, he proceeded to beat him up.

“Without waiting for him to respond, I immediately taught the guard a lesson.”

The security guard, believed to be a Bangladeshi national, was drenched in his own blood from Jamal’s bashing. 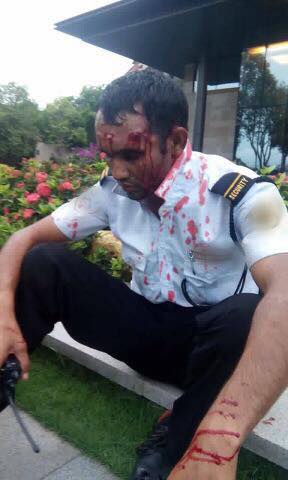 According to Jamal, what made him even angrier was the fact that another security guard, a Malay, tried to defend the perpetrator. In fact, the Malay man even tried to beat the husband up too!

To try and solve the matter quietly, RnF Johor Bahru begged Jamal not to make a police report against them. So, Jamal decided to share this story on Facebook to help raise awareness about being careful.

The post has since garnered over 14,000 shares and 1,700 comments by angry Malaysians. While some mentioned that Jamal may have taken it too far, many others commended him for protecting his wife.

“Pity the wife. Pregnant and still get this kind of treatment. Hopefully she is ok. May the stupid security guard be locked up in jail.”

What do you guys think? Was Jamal’s actions justifiable or did he overdo it?