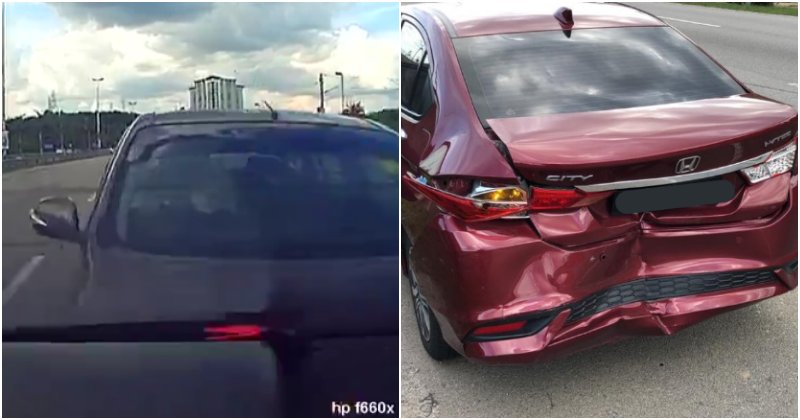 A video of a car getting rear-ended by another vehicle is not entirely uncommon in the Malaysia of today. With that being said, nobody can deny the trauma that comes as a result of getting involved in an accident especially when it is not your fault.

One netizen shared her husband’s experience of being a victim of another driver’s reckless driving and tells the story of how he was blamed for ‘stopping’ on the road when in truth, he was driving at the speed limit especially with a baby on board!

As you can see, the driver hitting her husband was clearly in the wrong lane if the driver’s intention was to speed.

But there’s more to the story.

Taking to Twitter, @lilyxxamirah writes, “My husband and two-month-old baby were hit on their way to pick me up from work last Tuesday by this crazy driver.”

“It is not enough that you hit another car, you had the cheek to step down and yell why my husband stopped in the middle of the road.”

She added that the crazy driver did not even think of asking the well being of the baby on board first.

Not wanting to bank on words alone, she added that the onboard camera has a speed rate on it and showed that her husband was driving at 51km/h. 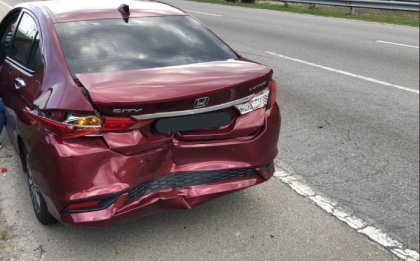 “This was the condition of my car. The baby’s seat was at the back, on the left side of the car.”

“It was so close to the dent!”

Not divulging as to how the crazy driver could have rammed into her husband’s car at that speed, netizens began contemplating the reason behind the reckless driving.

One netizen mentions seeing a handphone-like object jumping out of the hands of the crazy driver.

“If you look really hard, you can almost see something being thrown around in the car that looks like a handphone.”

This statement was later repeated by another netizen who had the same experiences being rear-ended by another driver, who was playing with his phone whilst driving.

For whatever the reason, it is important to note that no one was injured as a result of the incident.

We sincerely hope that the crazy driver will be met with a heavy fine for his reckless driving. 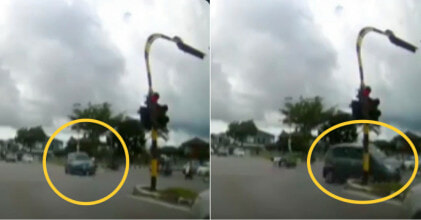