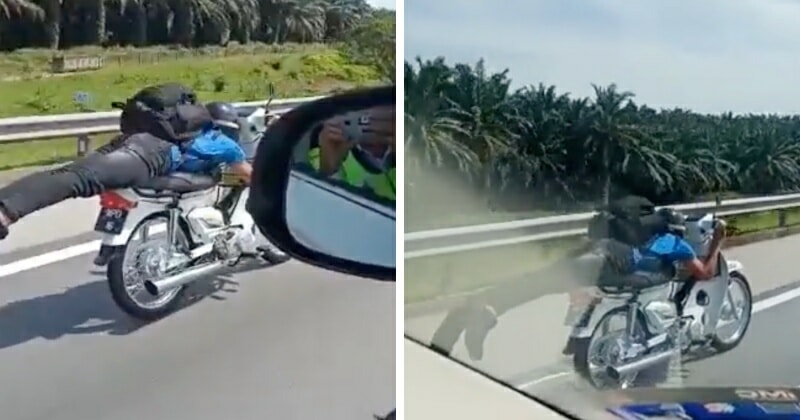 A Malaysian youth who was doing dangerous stunts while riding on his motorcycle along the East Coast Expressway 1 (LPT1) has been arrested by the Royal Malaysia Police (PDRM) after refusing to pull over and worse, even brought the police into a wild chase. The incident, which has gone viral on social media due to the reckless riding of the youth who was zig-zagging from left to right on the expressway and doing a ‘superman’ pose to the point that he didn’t notice a police car has been following him.

As reported by Sinar Harian, the Kemaman District Police Chief, Superintendent Hanyan Ramlan said that the 18-year-old suspect from Bandar Jengka, Pahang was arrested after he was spotted riding recklessly around 10.30am yesterday (27 August 2022). Hanyan further elaborated that the youth was zig-zagging and doing superman stunts on his Honda EX5 motorcycle for about 2km before he noticed the presence of the police.

The policemen on the scene then instructed the suspect to pull over but he refused and even sped away towards the Jabor Toll Plaza. This prompted the police to chase the suspect but the youth then made a u-turn and sped away while going against the run of traffic towards Kuantan, Pahang before again making a u-turn towards Jabor Toll Plaza.

While trying to flee from the police, the youth’s motorcycle crashes on its own at about 50 metres away from the aforementioned toll plaza. The suspect suffered minor injuries due to the crash and was subsequently arrested. He is currently being investigated under Section 42 (1) of the Road Transport Act 1987. Initial urine test on the suspect showed that he was not positive for drugs.

So, what do you guys think of the whole incident? Share your thoughts with us in the comments! 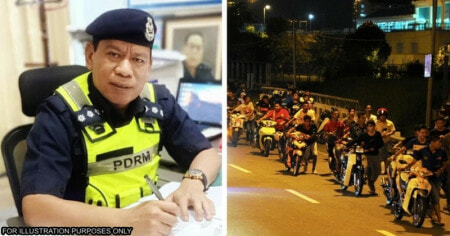