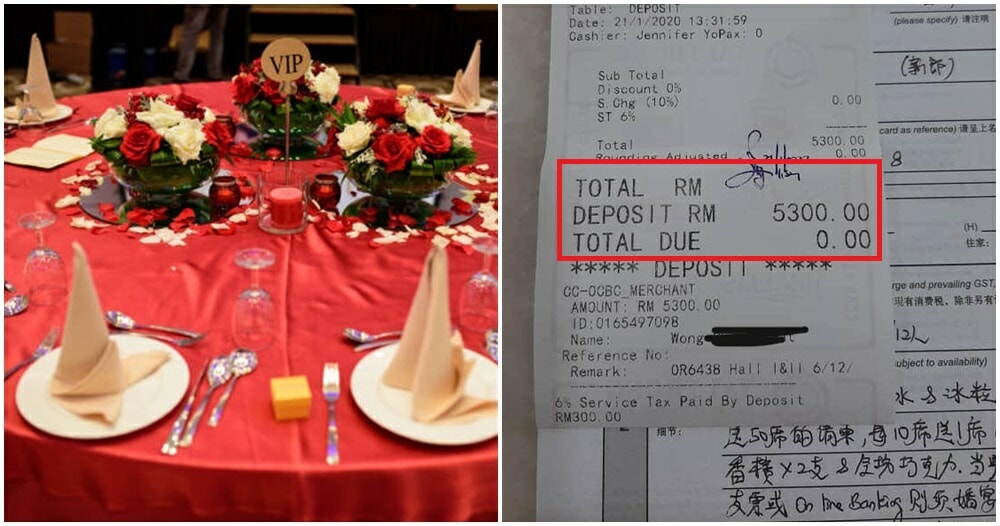 Weddings are one of the most important and joyous occasions we celebrate in our lifetime! But let’s face it, celebrating tying the knot with the love of your life can be expensive. Many are willing to spend thousands on this momentous occasion because they know it’ll be worth it. 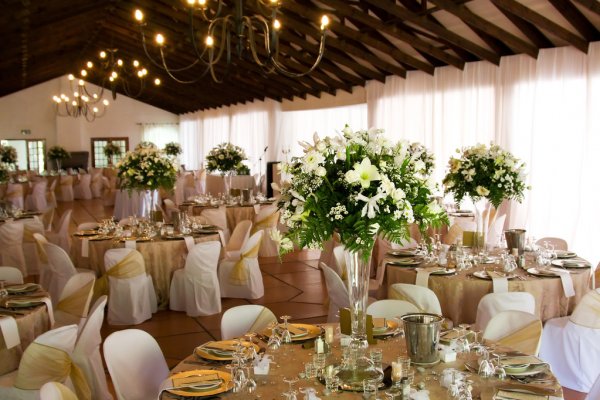 But unfortunately, that wasn’t the case for one Malaysian man who paid more than RM5,000 for a deposit on a wedding dinner to a restaurant who couldn’t pay him back after ceasing operations. 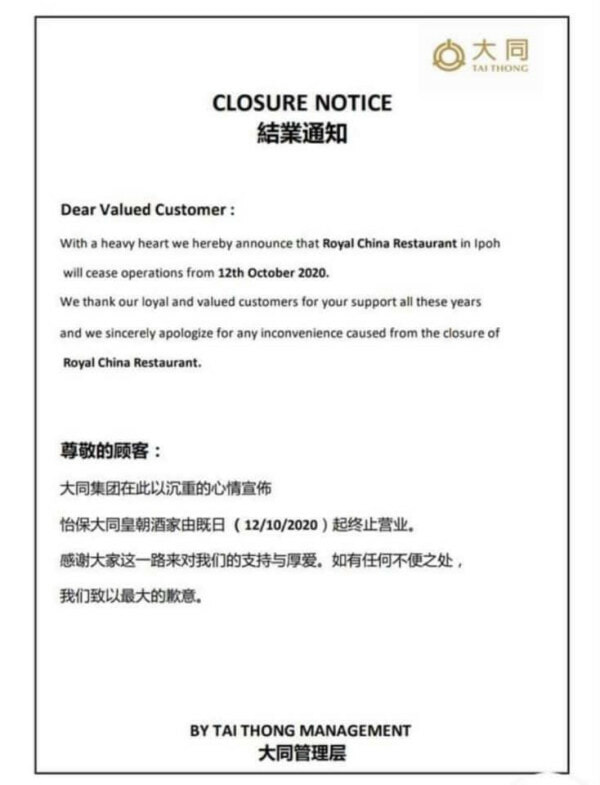 The man who goes by the name of Alex, took to Facebook to share his story. It all started when he received a message from a friend on 12 October, informing him that the restaurant he had booked for a wedding dinner in December had closed down. “We didn’t know anything beforehand and we didn’t receive any notice from the restaurant.” Troubled by this news, Alex decided to call the Head of Security and the Person in Charge (PIC) who redirected him to the headquarters, as they received this information on the same day. They were also told that they were shifting their headquarters.

“On 13 October, we contacted headquarters to request for a refund of the deposit, and Kelly, the PIC, asked us to give them 14 days to pay back the deposit in full,” Alex said as a reasonable customer, he believed that the restaurant would follow through on their word and accepted the payment period. 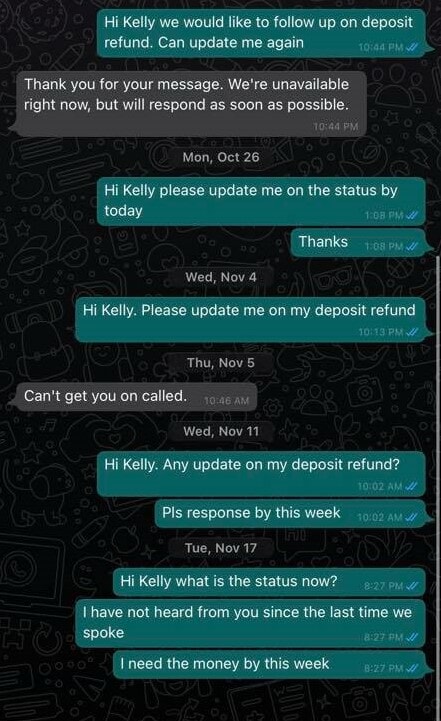 However, two weeks passed and Alex heard nothing back from the PIC. “From 26 October to 4 November, we tried contacting the PIC but we couldn’t get a reply and they wouldn’t answer the phone.” When they finally heard back from Kelly, it was 5 November and they were told to wait for further instructions from the management. Alex kept trying to follow up on the matter but was left with no further replies.

At last, on 23 November, the PIC contacted Alex again but with less than great news. Kelly told him, “We’ll refund RM3,000 to you, that’s it!” Taken aback by her statement, Alex said he was confused, “Refund me RM3,000 and that’s it? I paid RM5,300 as a deposit and I didn’t even have a single meal in the restaurant. RM2,300 of my deposit was deducted and I was treated so rudely as if they were handing the money to a beggar!” 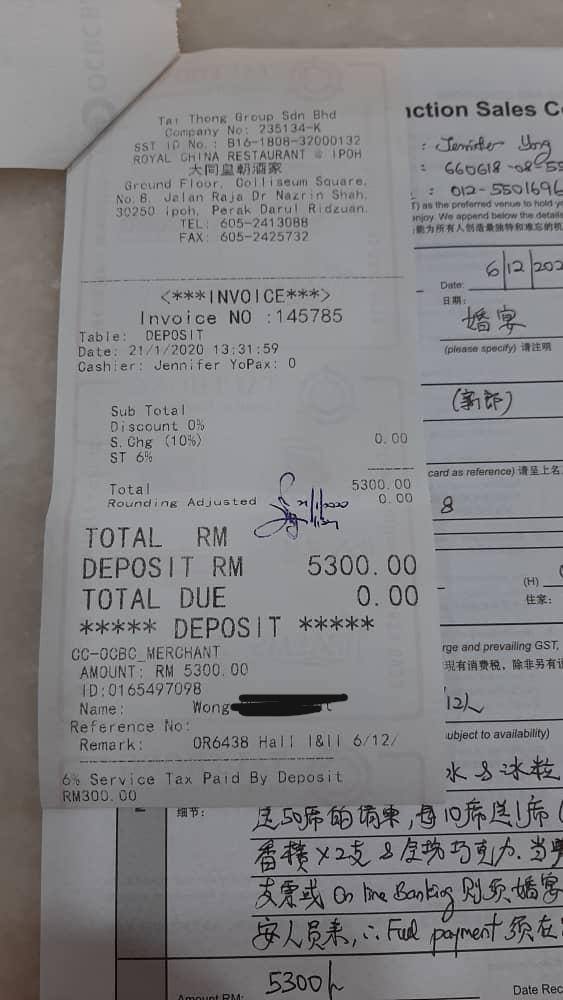 Alex immediately asked why they couldn’t return his full deposit and the PIC responded with, “There is no reason, it’s the decision from my management.” This only made Alex even more confused. “Huh? Did you say that your “management’s decision” is for me to pay a month’s salary for nothing? Is it my fault that you guys shut down?”

Alex decided that he needed to speak with “their so-called management” on this matter but when he asked for a contact, he was told they could not give him one. This made him all the more suspicious, “What management is so mysterious?”

After the phone call with the PIC, Alex said he got his sister in KL to look for the management and try and talk to them in person to hopefully solve their dispute. But when his sister reached their office and asked for Kelly, she was approached by a different staff called Micky who informed her that Kelly went out for lunch.

“What? I just called her office to contact her and she was out for lunch then? Is she not back yet?” That’s when Micky informed Alex’s sister that Kelly had only just gone out for lunch. “My sister asked to be referred to another “management” person in the office but she was told that they couldn’t disclose any information about the management or the CEO.” They told her straight, “you can lodge a report to the Consumer Affairs Department”.

At that point, Alex said he was speechless and wondered whether he did something wrong.

“I just want my refund”

“When I gave the RM5,300 deposit, I thought I could have a happy celebration but two months before the wedding, I found out the restaurant was closed and my deposit was also seized for no reason. The money was taken away from my blood and sweat. As consumers, are we deserving of this unfair treatment?” 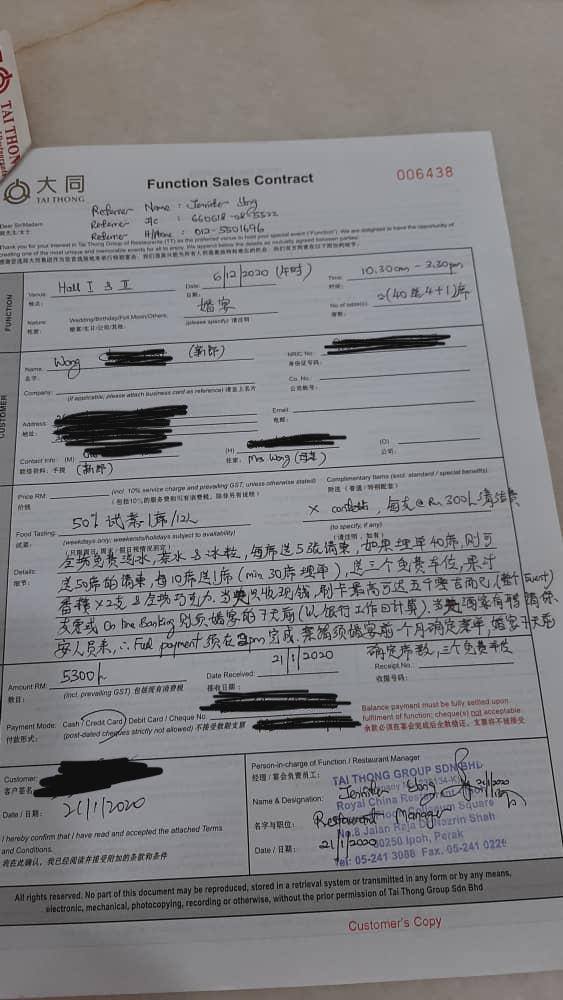 Alex ended his post by urging anyone who has experienced the same ordeal to contact him, expressing his hopes that such a situation will not happen again. He also hopes that the restaurant can step up to resolve the issue.

When contacted by WORLD OF BUZZ, Alex said he has no intention for his story to go viral. “All I want is to receive back a full refund of the deposit I paid.”

WORLD OF BUZZ has since tried to reach out to the restaurant for comment but only received a reply requesting for us to book a service. We also tried to contact Kelly on both Whatsapp and by calling her but the same response was received. 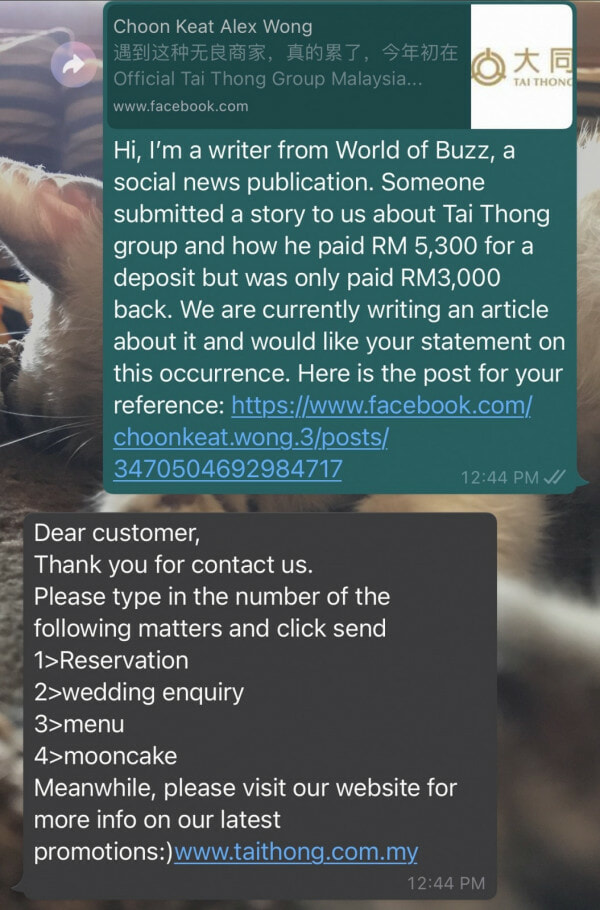 Hopefully, the restaurant management notices his story and tries to rectify their wrongs. What do you guys think of this? 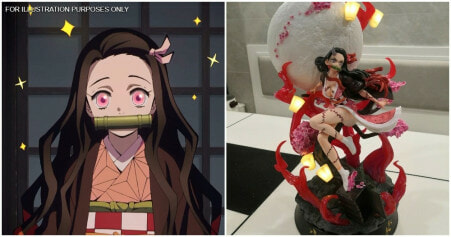