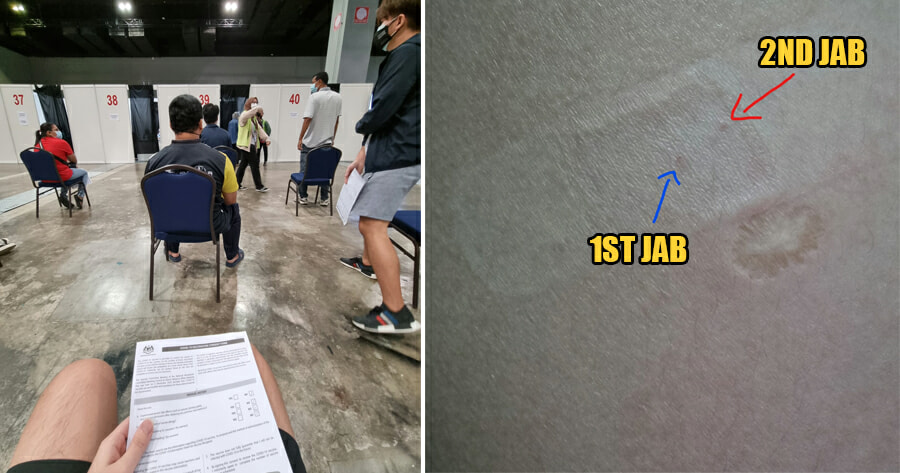 Another Malaysian has claimed that he received an ’empty syringe’ while getting his first dose of the Pfizer Covid-19 vaccine at the Malaysia International Trade and Exhibition Center (MITEC), Kuala Lumpur on 17 July.

In a Facebook post, Tan Wing Sam shares that he entered a vaccination booth with another patient and was attended to by one of the workers. He asked if he could record the vaccination process but was told that he wasn’t allowed to. 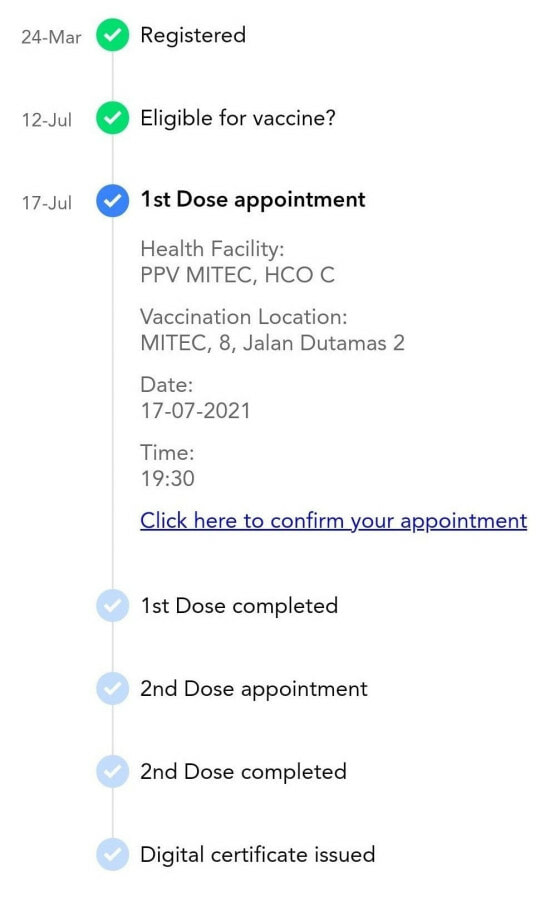 Before being administered the vaccine, Sam saw a tray with a syringe and a vial on it. However, he noticed that the silicone part of the plunger was already pushed down.

“I was expecting to see her withdraw the vaccine from the vial, but she then started using an alcohol pad to rub on my arm and that’s when she just took the ’empty syringe’ and jabbed it to my arm,” Sam said.

“About two seconds later, she pulled it out, put on the plaster and said it’s all done and asked me to proceed to the next section.”

“All she did was just jab in and pull out without any motion of pushing the vaccine from the syringe into my body. And obviously, the syringe was empty in the first place.” 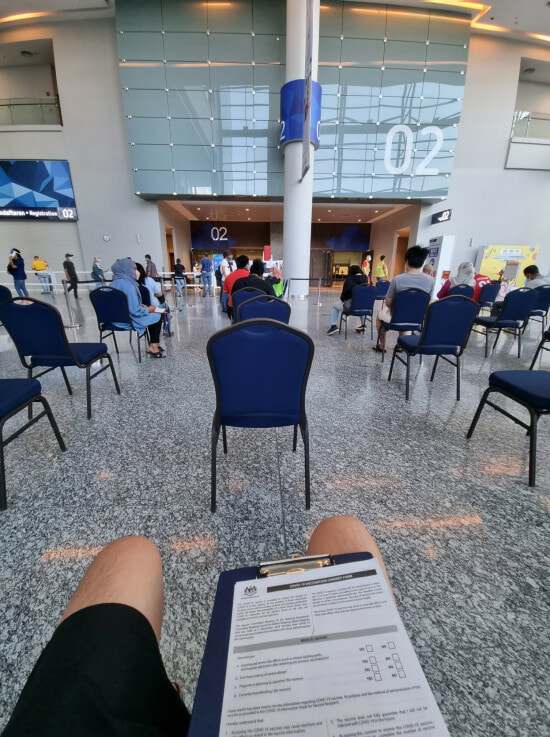 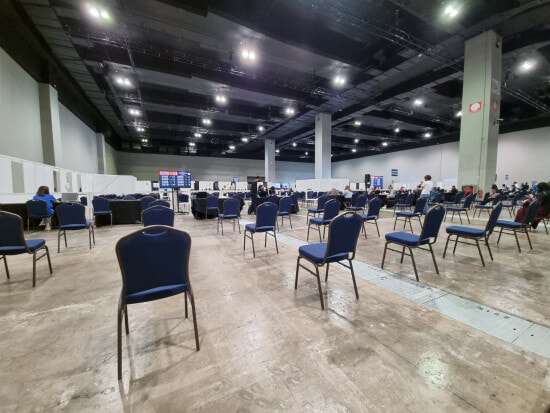 Sam confronted the nurse and asked if she had administered the vaccine properly, to which she replied,

“Should be. If you want, I can give you another one.”

Sam was puzzled as to how the nurse was able to offer him another jab without hesitation.

He recalls that the nurse then proceeded to get a new syringe and started the whole process all over again, this time with all the proper steps, from withdrawing the vaccine from the vial, jabbing the needle into his arm, pushing the vaccine in and taking out the needle.

The nurse then asked Sam to move along, but he wanted to clarify if the nurse had administered the first round of the vaccine properly. After hesitating, the nurse replied,

“Should have lah, but you say no so I gave you a second one.”

After Sam came out of the booth, he asked a worker if they have experienced people getting jabbed twice in one go. The worker was shocked and called a supervisor, who brought Sam back into the booth to confront the nurse. He said the nurse admitted to what she had done and they apologised to Sam.

As he proceeded to the observation area, the supervisor approached Sam and tried to assure him that he got vaccinated properly during the ‘Second Time’.

“There will be no ‘Second Time’ if I didn’t catch that!” Sam said.

You can listen to a recording of the conversation with the supervisor on Sam’s Facebook post here. 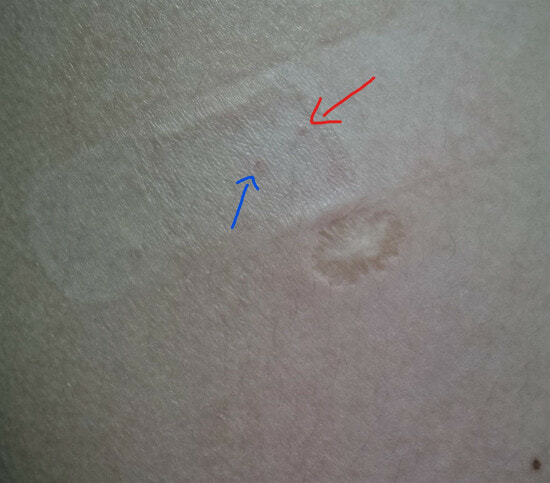 After Sam’s post went viral on social media, the patient who was in the same vaccination booth with him on that day messaged him on Instagram and said that she recognised him. She told him that she was there and heard the conversation he had with the nurse.

Sam shared the messages with WORLD OF BUZZ and in the screenshots, the woman who goes by Kak Jai, told Sam that she saw the nurse push the needle in and out of his arm without injecting any vaccine and later heard Sam asking the nurse if she had done it properly.

Kak Jai then reiterated the conversation she heard, verifying Sam’s claims in his post.

She also told him that she was unable to help him as her nurse had told her to proceed to the next section before calling another patient. 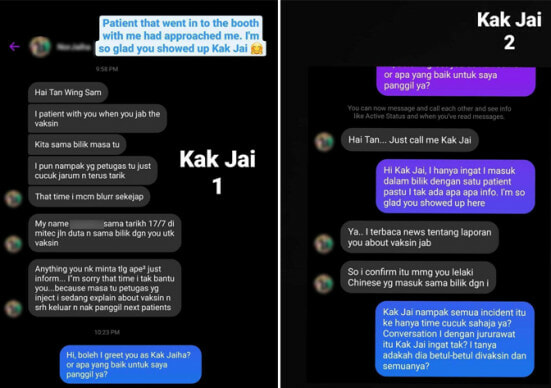 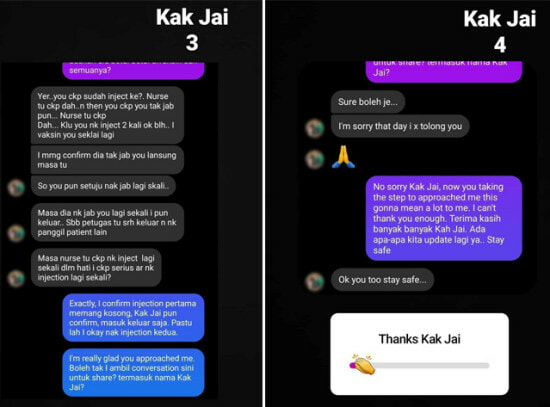 Sam later shared on his Instagram stories that he has made a police report about the incident.

“I’m raising this issue to everyone because it could be extremely dangerous if you didn’t get vaccinated properly and you being so happy thinking that you got vaccinated! I wonder how many out there think they got vaccinated but it’s actually just the needle jabbing in and out,” he said in his Facebook post.

“So please be aware everyone. It’s best if they show you if the vaccine is withdrawn from the vial properly into the syringe, before and after of the syringe, keep eyes on them during the vaccination. Please do not be afraid to voice out!” 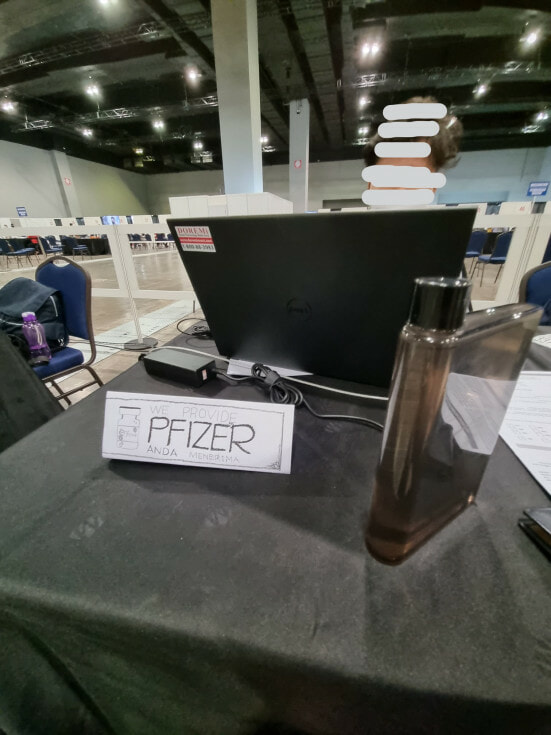 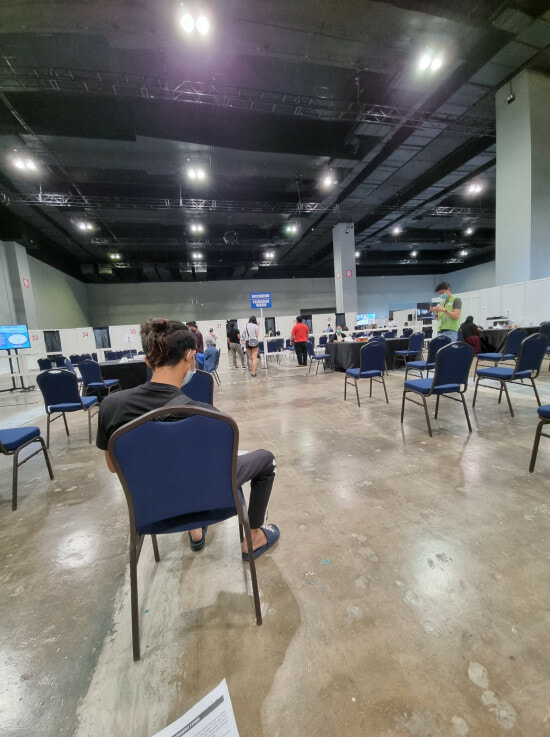 They addressed Sam’s case at MITEC and cited two other similar incidents that took place at a drive-thru vaccination centre (PPV) in Sungai Petani, Kedah (17 July) and the PPV at Bangi Avenue Convention Centre (BACC) (18 July).

The statement said that the police are investigating these cases and any developments on the matter will be notified by the relevant authorities.

“If found guilty, the CITF will not hesitate to terminate the services of the staff involved and take stern action in accordance with the provisions of the law in this matter,” the statement said.

“As with standard operating procedures (SOPs), each vaccination worker must show the syringe containing the vaccine to the vaccine recipient before the injection is performed. The public is also advised to look at the syringe before and after the vaccination process to increase confidence that the dose and injection of the vaccine have been given as it should be.” 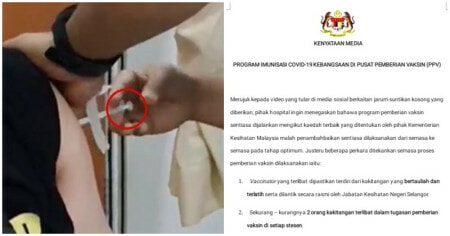