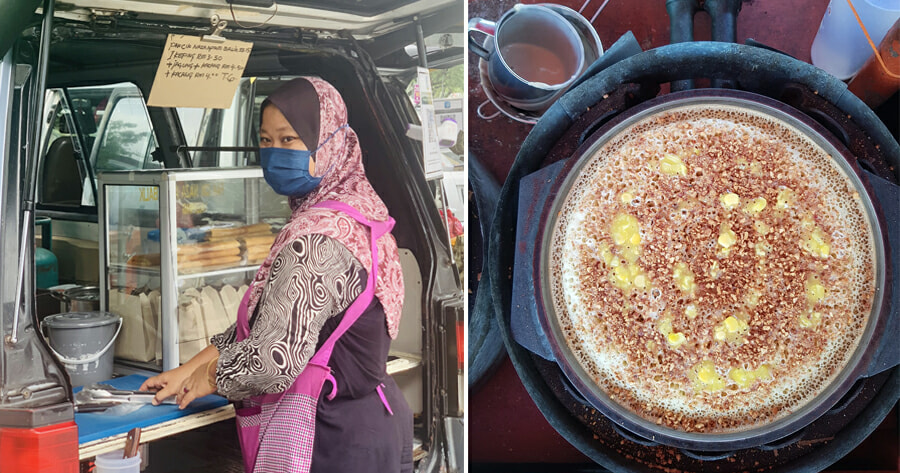 The pandemic hasn’t been easy for many individuals, but one couple was determined to push through their struggles and stay afloat by selling their very own apam balik in SS15, Subang Jaya.

Mak Cik Dewi, 38, and her husband, Pak Cik Naza, 58, started out their little stall without any prior knowledge or experience in running a business. Before this, Pak Cik Naza spent his days as a taxi driver until Grab widely expanded in Malaysia around 2016, which caused him to lose customers due to the public’s preference toward the service. 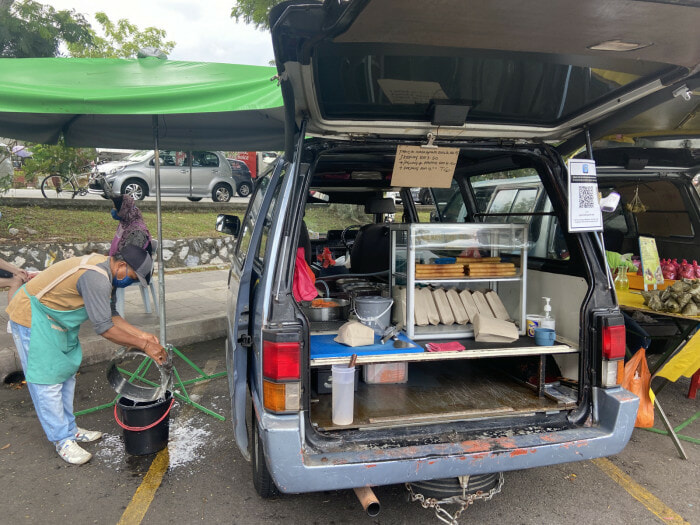 Prepping of the stall by pak cik naza

He and his wife then realised that their financial situation was not getting any better, and decided to venture into another field after long consideration.

They took their first step into the food industry by selling corn in a cup. While both of them prepared the food, only Pak Cik Naza would go out to sell it as Mak Cik Dewi was still working in a kindergarten at that time.

Pak Cik Naza would travel all the way to Puchong to sell it despite living in Subang Jaya, but unfortunately, not many customers were attracted to it. However, instead of being deterred and giving up, Pak Cik Naza and Mak Cik Dewi were even more motivated to find another way out.

They began to consider other food that they could sell and also came to the realisation that SS15, an area near them, would be a great spot to sell their products. 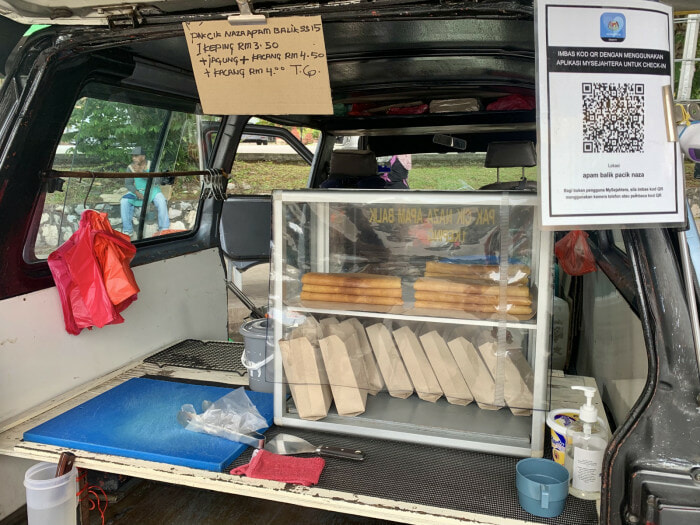 View of the stall

After surveying the area to find out what kinds of food weren’t being sold in SS15, they found their answer: apam balik, a traditional dessert with the texture of a pancake that is topped with crushed peanut granules and sweetcorn.

However, their struggles did not stop there because although they knew what they were going to sell, they had no idea how to make it. Thankfully, through the generous help from their friends and relatives, they were able to receive lessons on how to make apam balik.

After purchasing all the materials and ingredients needed to make the dessert, Pak Cik Naza and Mak Cik Dewi first had their friends over to teach them how to make it. While some pieces tasted fine, they felt like something was lacking. They then received some lessons from their relatives, but they still did not feel 100% satisfied with the outcome.

It then occurred to them that they did not have to follow the recipe exactly by the book, but can improvise on it according to their own style and creativity instead. They spent days and nights trying to come up with the perfect apam balik recipe of their own that would set it apart from the others. It was not a smooth process, but eventually, they succeeded by being perseverant. 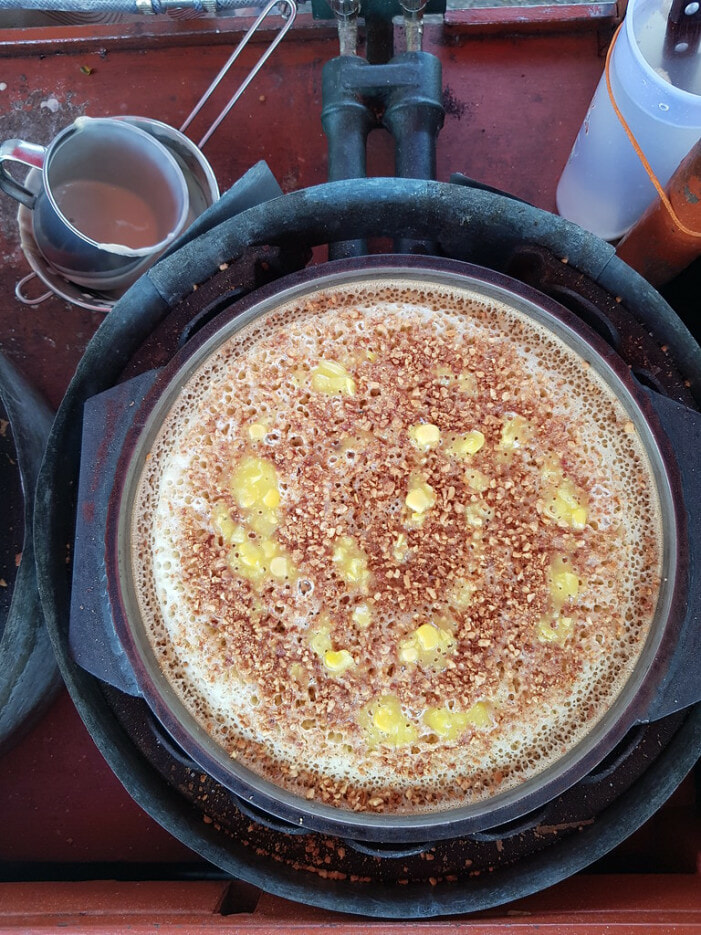 After all the challenges, trials and errors in the past, Pak Cik Naza and Mak Cik Dewi finally found the right product to sell at the right location.

Their apam balik business in SS15 has been thriving since the first day itself, with eight kilograms of apam balik, costing RM3.50 per piece, being sold out in just two hours!

Aside from their business, the couple is dedicated to taking care of their 10-year-old son. They have been highly encouraging towards their son’s education and well-being, ensuring that he is growing up healthy and coping well with his studies.

Mak Cik Dewi expressed her appreciation for her son, who is determined and independent despite his young age, and hopes that her son will continue to develop in various aspects of his life. 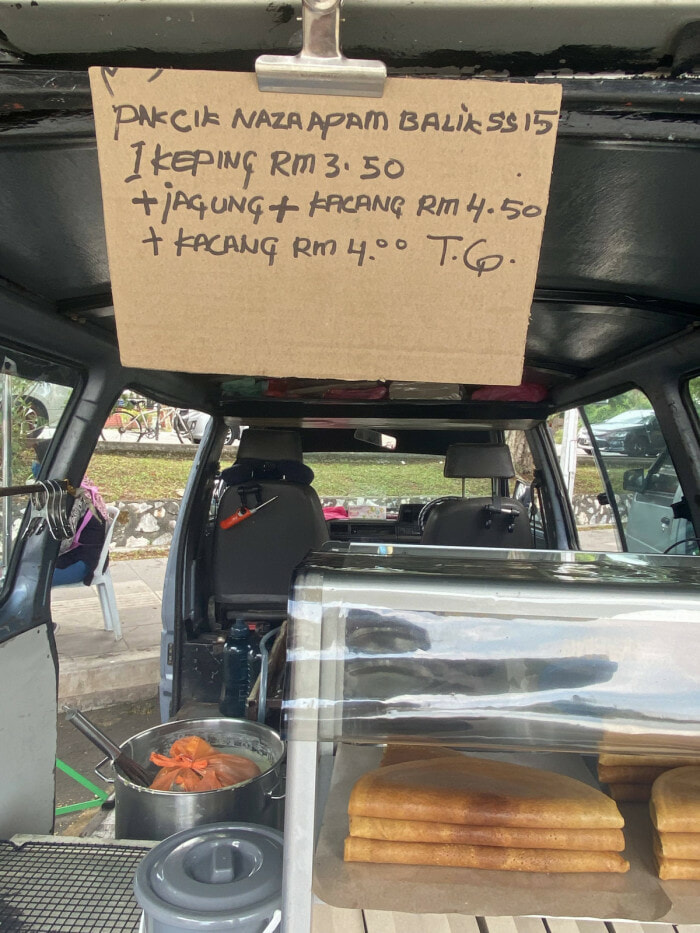 Priceboard and display of the couple’s apam balik

Not everything was smooth sailing for Pak Cik Naza and Mak Cik Dewi as the pandemic lockdown in 2020 made it difficult for their business. With travel restrictions and roadblocks, it was hard for them to get the ingredients needed for their apam balik in addition to a significant decrease in customers.

Thankfully, Mak Cik Dewi came across a Facebook account called ‘Bazaar Ramadhan’ which she could leverage to promote her business to potential customers. By including pictures of her apam balik, several orders came in and Pak Cik Naza helped deliver it to the customers’ doorsteps within the Subang Jaya area.

Meanwhile, she has been helping her husband at the stall recently after she quit her job at the kindergarten. 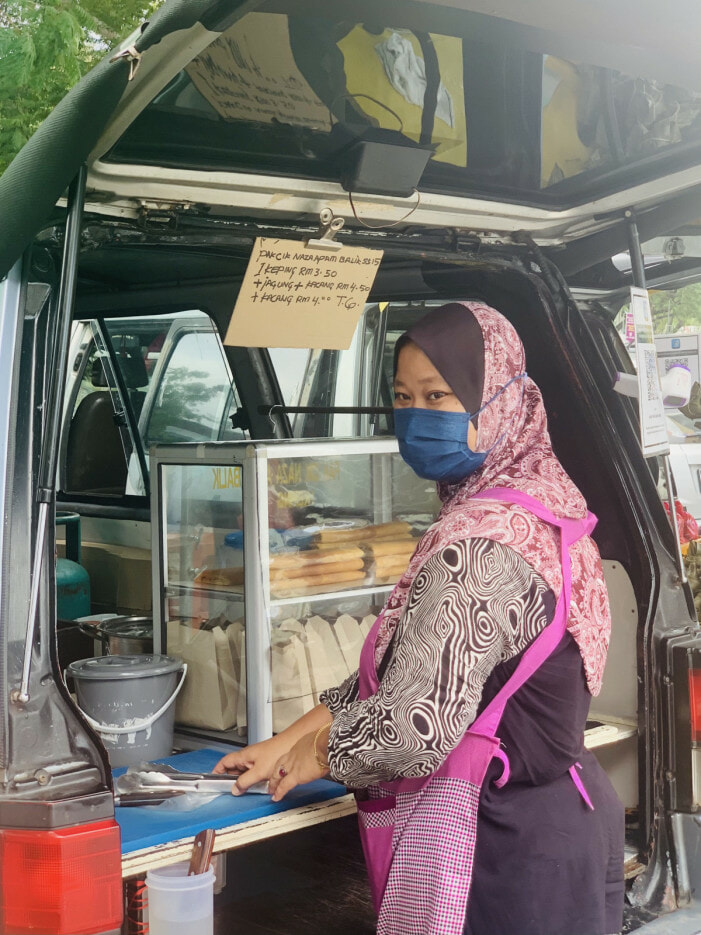 Although the pandemic and travel restrictions continue to stay unpredictable until today, the situation for Pak Cik Naza and Mak Cik Dewi has been getting better lately.

Despite having to regain customers and striving through an endless process of reaching new markets, their four-year-old business continues to captivate customers due to the simplicity yet the remarkable taste of their apam balik.

Mak Cik Dewi warmly urges people to explore different things and fields, as well as to do the things that correspond with their respective interests or passions.

“There were both sweet and bitter remembrances to get to the present,” said Mak Cik Dewi.

Perhaps these instilled values are the reasons why Mak Cik Dewi and her husband were able to break through their hardships, learn from them and are now enjoyably running their business which stems from their constant determination and hard work.

If you’d like to try out some of Pak Cik Naza and Mak Cik Dewi’s apam balik, you can drop by their stall located in SS15.

Disclaimer: This feature story was written by Evita Aurelia and Annisa Shafira Oryza for their Professional Media Workshop module at Taylor’s University. 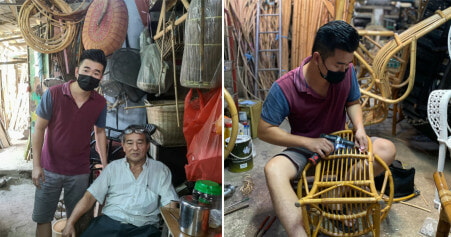