Many educational institutes tend to have orientation and activities to help newcomers familiarize themselves with the new place and grow closer to their seniors. However, sometimes these orientation activities can get out of control.

A photo of a public higher education institution (IPTA) in Malaysia went viral on Twitter and one very angry netizen, Asrul decided to write an infuriated rant about it, which in turn went viral too! 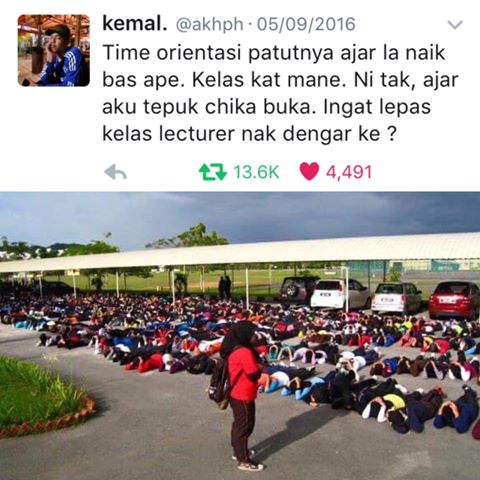 “THE STUPID TREND OF IPTA MALAYSIA”

“Only the stupid kids become the facilitator for university orientations, then they punish the juniors to do this and that – dance, sing, ask for signatures from seniors, soak in rivers, and all that. Third world’s mentality.”

Asrul was furious over the excuse for these sort of orientations, typically hearing:

“You have to create a good relationship with seniors so that later it will be easier to ask for their help during projects.”

Asrul mentions that the reasoning was weak as giving seniors an excuse to bully juniors doesn’t actually “cultivate the bond and relationship”.

“I can’t understand the culture of local universities. Why should there be a dependency between seniors and juniors?”

“When you’ve entered university, you should be independent. You need help with dormitory, rented house, sick – sure. But for studies?”

“Perhaps I am biased but I have never heard of Malaysian students overseas who asked for the help of their seniors in their studies, regardless of whatever major.”

“Orientation between seniors and juniors in universities abroad is also rarely heard of. At the very least, there will be a briefing and visitation (of the campus) done by the university staff or student council in a professional manner.”

“But never ever have seniors in universities abroad asked their juniors to perform tasks like, ask for signatures, dance the Chicken Dance, sing songs or lie face down in parking lots. Only Malaysians would do such stupid things.”

“But juniors will show off, be arrogant, disrespect seniors”

“Who the hell are you for people to give respect to? Respect has to be earned not forced.”

“Aside from making juniors feel angry and vengeful, it shows how your mind is totally non-intellectual.”

Many people who read this agreed wholly with him and some shared their own terrible orientation experiences. There were also others who think otherwise, explaining how orientation is good for the student.

“I punched one senior. In the middle of the night, he was throwing flour at me. Does he think I am cha kueh?”

“I think orientation is actually good. It will teach juniors to respect their elders.”

Well, what do you think? Is his rant true or do you believe that these orientations are actually helpful? Share with us your orientation experiences as well!