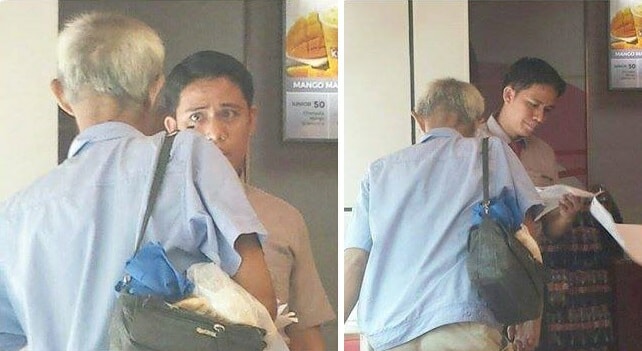 A witness named Matteo was in KFC having lunch when he spotted an old man in torn clothes while carrying a black bag. The old man had what it seemed to be a broken arm and approached Matteo for some donations.

The Filipino along with a few other people spared him some change before the KFC manager appeared.

Instead of having the poor old man kicked out, the crowd was surprised that the manager showered him with kindness instead.

“This made my day.

I was eating lunch at KFC IT Park earlier and as I was about to finish my meal, an old man with worn out clothes, a black bag and a twisted/broken arm entered the store and approached me (I was sitting near the door) and then showed me his arm.

He was saying something, but I didn’t understand any of it. Nevertheless, knowing his situation, we handed him money, which I don’t normally do, coz I’d rather buy him food instead, but in this case, I did..together with the other customers near him. He also showed me a letter with some “Office of the Mayor” heading.

I wasn’t able to read it, for the manager already came to him. I thought he was going to kick him out of the store, but he didn’t. To my surprise, he offered him food and talked to him instead. He even asked his crew member to replace the old man’s collected coins with bills. I’ve overheard that he collected about P150 (equivalent to RM13.70) and the manager gave him P200 (equivalent to RM18.30).

It’s unexplainable feeling to see how his face brighten up when the manager handed him the food and the money..even until he was about to leave the store. You can tell how thankful he was. I was just smiling the whole time, covered in so much happiness upon seeing his face.

After the old man left, I went to talk to the manager about what he did and asked if I could post this. (He requested not to include his name). He said that they’re really not allowed to tolerate beggars inside the store, but he couldn’t help but feel pity of the old man, especially when he saw his arm.

He said that, “Naa pud baya koy papa inganang idara. Unsa man imu bation, diba?” which means “I also have a father about his age. How would you feel if that’s your father?”. The old man’s child also has a mental illness, so he doesn’t have much choice but to take care of his own.

I was teary eyed when I walked out from the store. It makes you think that a lot of people complain about not having the things that they want like an expensive bag or shoes, while there’s someone out there who can’t even provide a meal for a day..or someone who couldn’t afford to seek for medical attention.. And then there’s also someone who’s stripping in public to get an iPhone. #smh

On a lighter note, it feels amazing to know that there are still good people out there, like the manager and the people who offered help for the old man. They taught us to be compassionate of others despite their looks, status, gender, color, race or whatever societal norms there may be.

God bless you, all! The world needs more people like you!