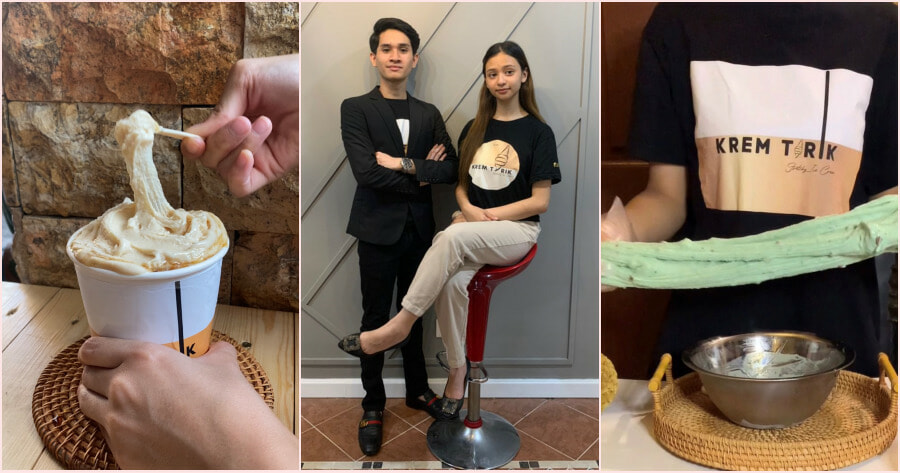 As the famous saying goes, ice cream makes everything better. Well, if you love trying new ice cream flavours and concepts as much as we do, you’d be surprised to find out that there is such a thing as stretchy ice cream.

As you may have seen in viral videos of stretchy ice cream, the dessert, also known as ‘dondurma‘, is famous in Turkey.

What makes Turkish ice cream different from regular ice cream is the addition of ingredients such as salep, derived from orchid roots, and mastic, a plant resin from the mastic tree, which combines to give Turkish ice cream its stretchy and chewy texture. 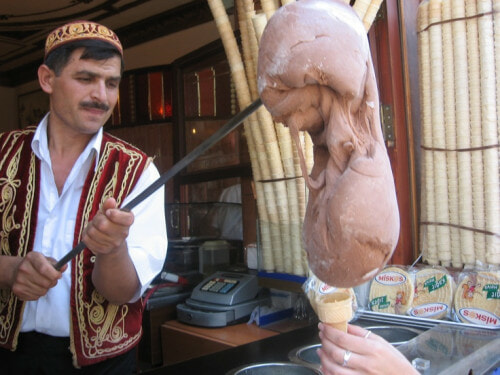 However, both of those ingredients are super rare and expensive and are also currently endangered, so the Turkish government has banned their export.

Alternative for it came in a dream

Founder of Krem Tarik, 21-year-old accounting graduate Azareil told us that after being inspired by Turkish ice cream, he tried to replicate it with several alternative ingredients.

To check that there was, in fact, a demand for stretchy ice cream in Malaysia, he released a questionnaire for 3 weeks on social media, which gained several positive responses. 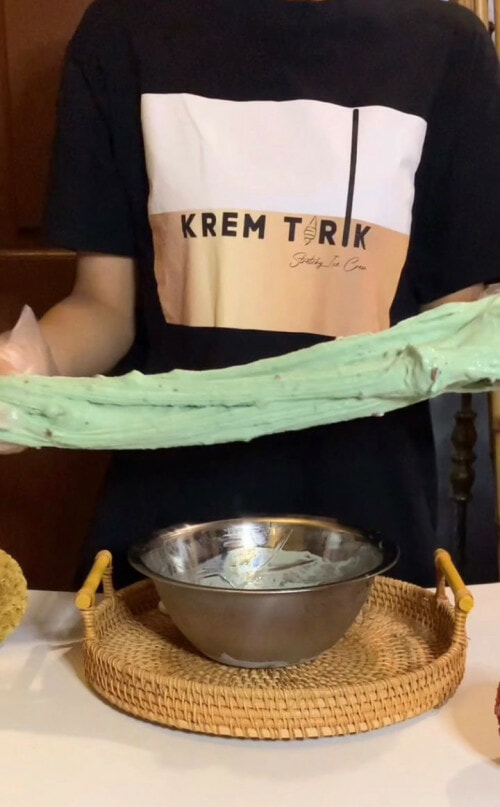 However, after many tries, Azareil was so frustrated and wanted to give up when he couldn’t find an ingredient to replace salep and mastic. That’s when he miraculously dreamt of what to use and immediately bought the secret ingredient.

After many more tries, Azareil finally managed to get the perfect formula for his stretchy ice cream.

A total capital of RM3,000 was then put into the business.

From neighbours to business partners

Speaking to WORLD OF BUZZ, Azareil mentioned that he had never had any previous experience dealing with food. Despite not wanting to give up, he was disheartened to discover that some of his family members believed he couldn’t do it.

That was until a chance encounter with his neighbour Elmira, an 18-year-old student from within the area, who helped change the course of his dreams.

After telling Elmira that he was trying to start his own ice cream brand, she offered him help as she noticed that he was struggling to run the brand by himself.

They told us they started the R&D phase in August 2021, where they spent over 3 months perfecting the recipe and experimenting with different flavours and ingredients.

Krem Tarik’s ice cream is made with fresh milk, natural ingredients for flavourings, some food colouring, and their secret ingredient, which they claim that their recipe is self-invented and cannot be found elsewhere.

Firstly, milk is heated to thicken the mixture, where they will “pull” the cream to enhance its stretchiness. After that, the cream will then be transferred into a freezer drum and splashed onto the frozen sides of a bowl. 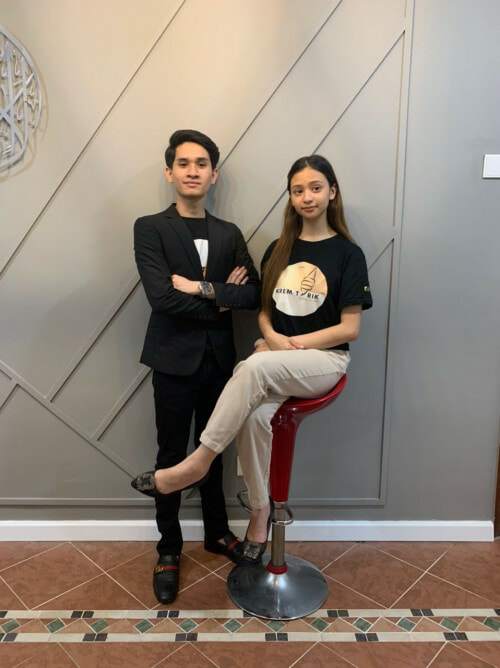 As the mixture freezes and hardens, they will scrape its sides and repeat the splashing and scraping process until a frozen ball is formed.

That’s when the fun begins. They would then beat and hand stretch the ice cream allowing air to be incorporated into it to ensure its stretchiness.

The flavours that they currently have include, Blue Comet, Popping Lime, and Milk & Cereal amongst many others. Each pint cost between RM30-RM35, depending on the flavour. 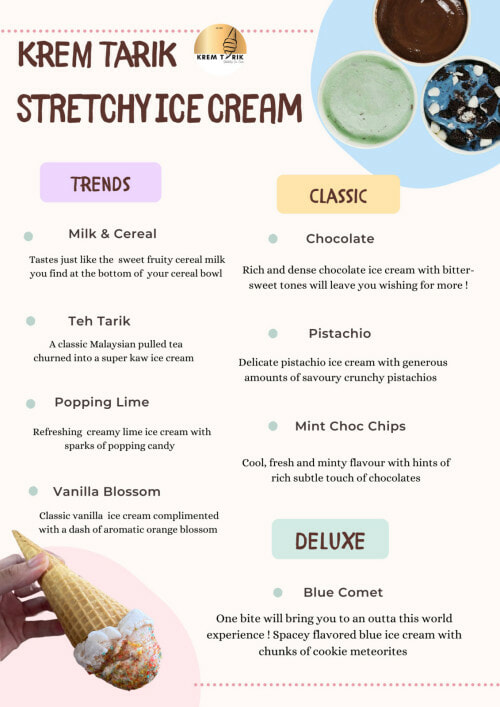 According to Azareil, they are making over 50 tubs daily and have expanded their team with several part-timers.

The Bukit Jelutong duo now also owns a separate storage and production facility to store their tubs, whilst the R&D for new flavours remains in a small section at Azareil’s house.

Currently, the duo are still selling from home and delivering the flavourful tubs to their customers across the Klang Valley. 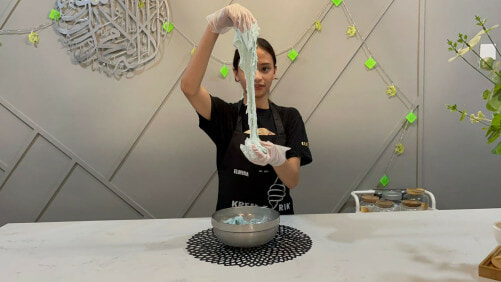 However, they informed us that they are opening up their first physical outlet in Bukit Jelutong, which is expected to be ready by the end of the year.

Besides that, the duo also revealed that they are in talks with prominent local businesses on how they could collaborate to make sure that Krem Tarik is more locally accessible and export their ice cream to the Middle East with the help of Linda Roos of Pronto Prima Sdn. Bhd.

For more information on Krem Tarik and their future plans, do check out their Instagram and Facebook pages.

Watch a video of the hand stretching process in the video below:

Have you tried Krem Tarik’s ice cream? Are you looking forward to trying Malaysia’s first ever stretchy ice cream in their upcoming outlet? Share your thoughts in the comments section!

Also read: From Car Boot To 35 Outlets Across M’sia: This Dynamic Duo Built A Coffee Empire In Just 3 Years! 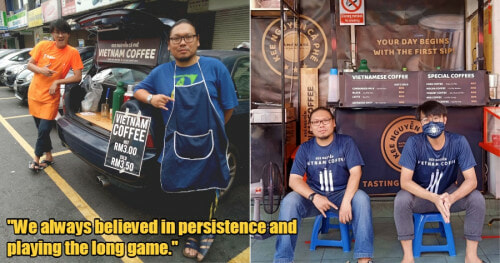