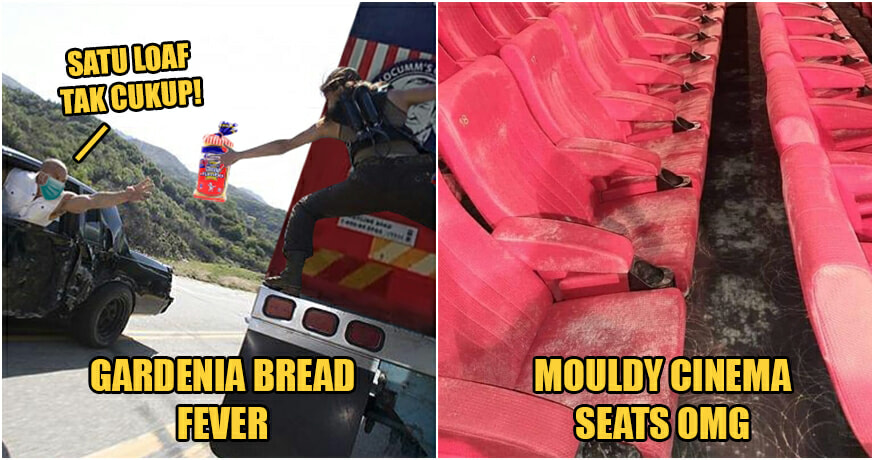 It’s safe to say that after two whole months of Movement Control Order (MCO), most of us are pretty happy to be returning to a (somewhat) normal life, with the new Recovery MCO opening up more businesses and loosening restrictions. But honestly, as much as the MCO was a hard-to-swallow bitter pill for many, it can’t be denied that we all made some pretty incredible memories together collectively, as a nation!

Here are just some of the ones we can think of:

This one confirm top of the list for the most absurd things to ever happen during MCO. After Gardenia Malaysia announced a temporary shortage of their bread due to their factories being unable to meet the sudden demand for stock, Malaysians practically emptied shelves of their product to make sure they had enough roti to eat.

Eh, you guys know roti only last around one week right.

And of course, this inevitably led to the theft of a Gardenia delivery truck. But what makes this all the more weird is that… the truck was found with most of its bread intact. So why did they steal the truck? The mystery remains unsolved.

3. When the military was deployed to keep us home

Now, we already expected the police to be out and about during the MCO, but how many of you guys were as shook as we were when the government announced that the military would be deployed to make sure we stayed home? That’s when we knew that things were getting really serious.

4. The day when Mak Cik Kiah became a nationwide phenomenon

Among the many memes to have been spawned out of Prime Minister Tan Sri Muhyiddin Yassin’s many national addresses during the MCO period, his reference to a certain Mak Cik Kiah has probably been one of the most memorable. In fact, Mak Cik Kiah became such a phenomenon, she was even referred to in subsequent speeches by our Prime Minister and became a trending topic on Twitter.

However, to this day we are still trying to figure out who in the world is Mak Cik Kiah. Hmm…

Spawned from an Indian method of whipping up instant coffee into a thick, creamy consistency, all Malaysians caught on to the Dalgona coffee craze that had pretty much every household stocking up on jars of instant coffee to try the recipe for themselves.

And speaking about cooking, how many of you have joined the ‘Masak Apa Tak Jadi Hari Ni’ Facebook group? Founded to showcase and to some extent, celebrate everyone’s DIY cooking fails, the group has since gained a massive following over social media. In fact, even our PM touched-based briefly on it too!

While Mak Cik Kiah may hold a special place in many of our hearts, when it comes to memes from Prime Minister Muhyiddin Yassin’s national addresses, ‘ke sana, ke sini‘ will still remain as the all-time fan favourite. Initially meant to serve as a reminder for Malaysians not to travel all over, the phrase became so catchy, it spawned a life of its own.

So much so that a remix was even released with the Prime Minister’s vocals in it, which has gone down to become one of the most popular tracks to be featured on TikTok!

As people get to return to their businesses during the Conditional MCO period, a department store was horrified to realise that a lot of their leather goods, including bags, shoes (especially shoes), belts, wallets, and somehow, even cloth pants, became covered in mould. The story gained so much attention, it was even reported abroad. Legit.

Yeah, like it can’t get any worse, right? Right after mouldy leather goods, cinema employees who returned to their cinema halls during CMCO found that mould had started attaching onto the fabric of cinema seats and the carpets. And until now, we still dunno which cinema chain was the one badly affected. Any guesses?

10. Pos Malaysia being OVERLOADED with packages

With so many people turning to online shopping as an alternative to shopping through physical storefronts during the MCO period, it was no surprise at all that Pos Malaysia eventually came to report that they were simply overloaded with packages, and had to take more time to send them out. In fact, video footage even revealed just how may packages still awaited delivery from their warehouses.

11. The tragic story of a Pos Malaysia postman, that turned out to be a con.

This one is sure to bring a tear to your eye, as it did for many Malaysians who read the story about how a Pos Malaysia postman broke down after finding out he wouldn’t be given a bonus this year for his hard work. It inspired a small movement here in our country, calling for POS Malaysia to take better care of their employees, who were working around the clock to deliver parcels across the nation.

Yet, it turns out, the story was a complete hoax, and now we want a refund on our tears thank you very much.

12. The shortest Hari Raya Aidilfitri ever: one day

For our Muslim friends who celebrated Hari Raya Aidilfitri during the MCO, perhaps one of the most memorable periods during the last two months was how short-lived the festive celebration was this year. Due to the need to control the number of infections within Malaysia, Hari Raya visitations were only permitted for one day, and were limited to 20 people at most.

But perhaps one of the most amazing memories to have emerged from the MCO period was the rise of Ms S. Pavithra’s YouTube channel, Sugu Pavithra. From a humble start of around 50,000 subscribers, she has now amassed a following of 647,000 subscribers, while also gaining the support of fellow Malaysians and Prime Minister Muhyiddin Yassin!

So what other incredible MCO moments do you have? Share them with us too!