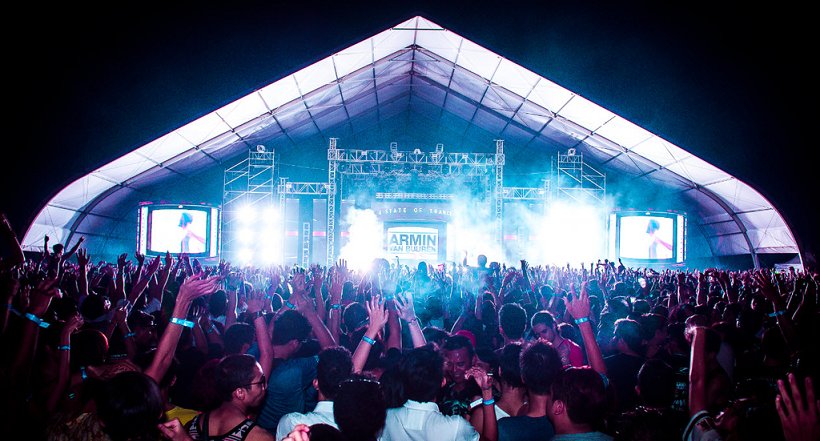 Almost every Malaysian knows how our country took a sad turn and killed almost every big live event since 2014.

Future Musical Festival Asia (FMFA), which was held in Malaysia, was known as one of the largest events in Southeast Asia featuring over 30 big international acts over a period of two to three days and attracting over 75,000 festival goers. However, in 2014, a case of 6 Malaysians dying from drug overdose has since gotten authorities to put all future events on hold. 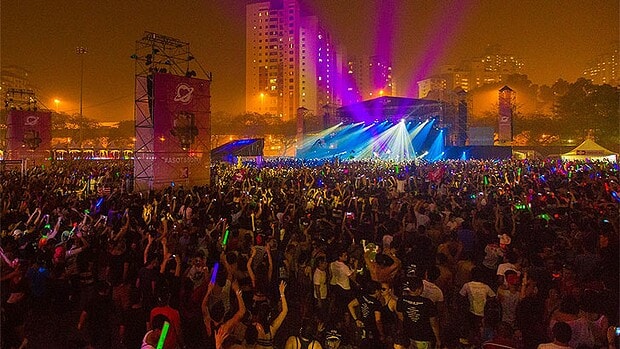 Since FMFA2014 got cancelled, the government has not been easy on event organisers. International events have been near the point of extinction as they have faced numerous cancellations and often at the very last minute.

The latest incident whereby Transtellar 2018 was cancelled at the very last minute shows that this problem persists and will be the death of the events industry in Malaysia. You can only imagine how much money was flushed down the drain. From advertising to salaries of venue workers, it has all been budgeted and spent before such ill fate comes into play.

Event organisers cannot afford to cancel a grand scale event at the final hour and refund the tickets after a few weeks. 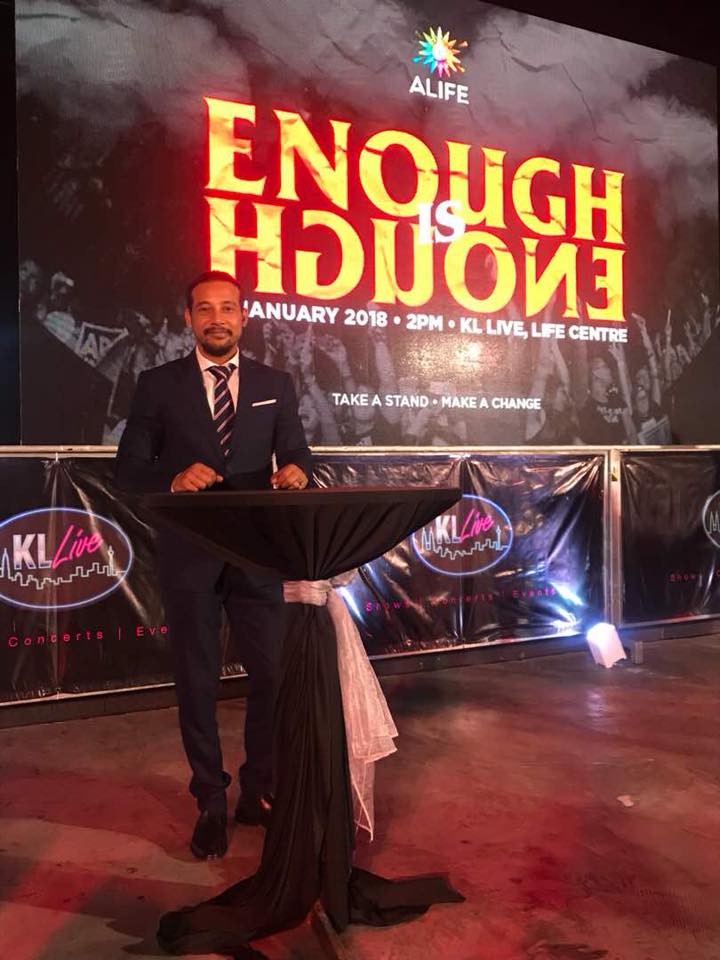 Well, enough is enough. An event that went by the name “Enough is Enough” was held not long ago by ALIFE (Association of the Arts, Live Festivals and Events), a non-profit organisation whose council members are the top few big shots in the event world in town – think large scale music festivals like FMFA, THIRST, The Good Vibes festival and huge concerts and shows featuring international artists such as Russell Peters, Maroon 5 etc.

“For all these maksiat accusations, as far as I know, no one has ever taken off their clothes at any of our events. This music festival thing is a big thing for us. But now we’ve expanded to other countries. We’re going strong there because we have no more work in Malaysia to do. We were once flourishing but now we work from cheque to cheque.” – Andrew Netto, Brand Director of Digital Aid.

According to ALIFE, the events industry generates over 17,000 jobs. Livescape Asia estimated that the Future Music Festival Asia brought in 15,000 tourists and over RM52.5 million in tourist revenue. For FMFA 2014, they estimated it was around RM112.6 million. However, all these last minute cancellations are killing the industry. 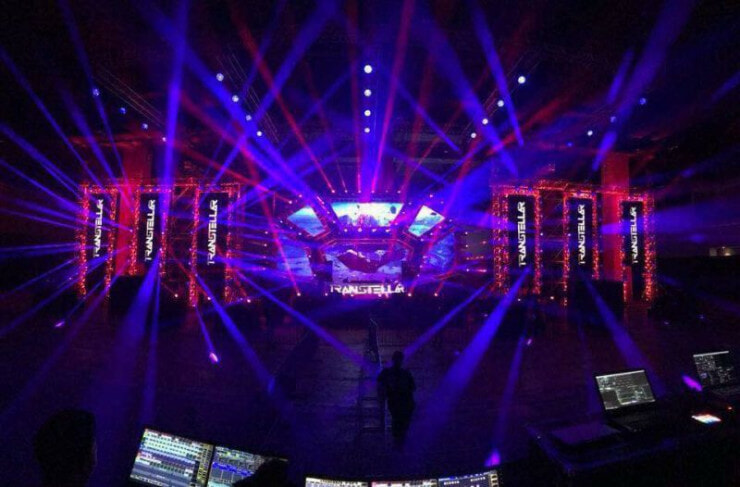 However, as this problem persists, ALIFE has come up with a plan to possibly solve the problem that has been killing the industry for years now. 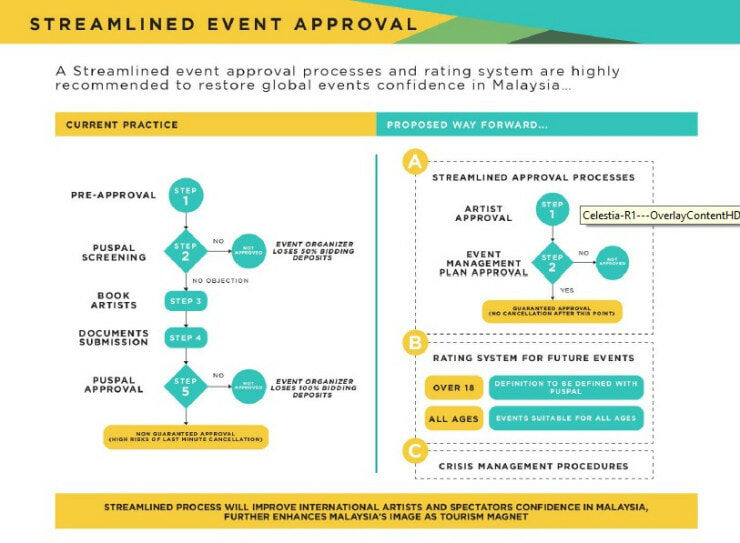 In a nutshell, any live event with an international artist requires three approvals to proceed:

Hence, if any one of these entities disagrees to the event, then the event is legally not allowed to proceed. 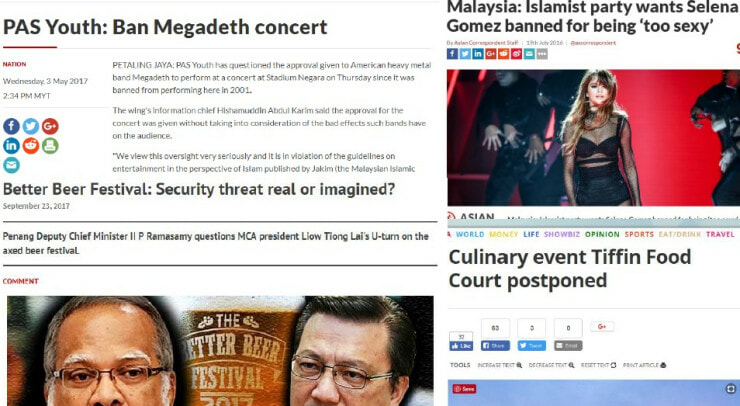 “Lately, most of the last minute objections come from DBKL, and a few from MPSJ. Actually, over the past few years, there have not been any cancellations from PUSPAL” – Rizal Kamal

According to Rizal, PUSPAL is the one who decides if an artist is culturally appropriate for the country, the police is in charge of safety, and local municipal is in charge of impact to the local community – e.g. traffic.

The shocking problem is that most of these events had already been pre-approved, and then denied at the last minute, which is essentially what the flowchart above is supposed to fix.

Rizal Kamal states that whatever comes from PUSPAL is not binding with the local council which is strange because every Tuesday, there’s a PUSPAL meeting where they talk about upcoming events and DBKL and the police have representatives. The local council is supposed to only be involved in traffic impact.

Essentially, what ALIFE wants from PUSPAL is an approval that is rock-solid. Hence, PUSPAL communicates with the police and local councils, and once approval is granted, it cannot be revoked.

According to the The Star, in 2011, international events brought in RM845mil, in 2012 it was RM916mil, and in 2013, almost RM1.2 billion. Others have also noted that suppliers these days don’t even DARE to support a live event for fear of it getting cancelled.

Within the last few years, Malaysia has also taken a hit from tourism as tourists are spending and staying more time in our neighbouring country Thailand. “With tourists now opting for other countries, KL needs to be marketed as more than just a shopping heaven. Our city has much more to offer than shopping and sandy beaches. For most events with international acts, more than 35% tickets are from overseas,” says Edy Fathullah.

Based on past experience, ALIFE is targeting to bring it 250,000 tourists through live events alone over the next 3 years. They estimate this could generate up to RM1.48 billion in revenue, with RM89 million in GST collections alone. However, generating money is not the only part where event organisers are concerned about as there are also the worries that each cancellation (that usually generates A LOT of international news coverage) could start to brand Malaysia as an unattractive destination. 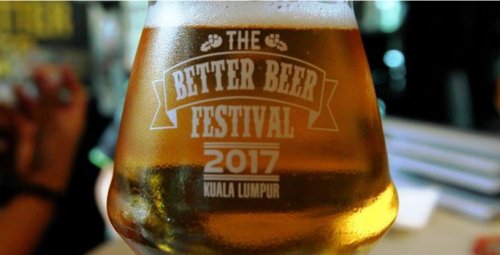