You may have seen this Facebook post recently making its rounds on the social media site. Posted just yesterday, a school teacher named Hafid shared how unsettled and concerned he felt when his young former student asked if they could have sex in a WhatsApp message she sent.

“I’m just a trainee teacher, so if you want to be causal with me, then fine. However, at least show me some amount of respect because I’m older than you. School students these days really have no manners!”

“I just wanted to show the difference between students then and now. Before, students would bow when passing by teachers… now, God only knows what they’re up to.”

He then accompanied his post with screenshots of a WhatsApp conversation with his student, and needless to say, their exchange seemed rather unsettling.

During their uncomfortable exchange, you can clearly see Hafid denying the student’s advances. At one point, she even offered to send her own nude photos to him! She also tried to video call him, but he refused to answer, not wanting to encourage her behaviour.

In the end, the student apologised to him when she realised how inappropriate her actions were.

Hafid later stated that they were already communicating on WhatsApp before things turned inappropriate. His post received a lot of backlash from netizens, who complained that he did not assert himself enough. However, they did not understand the whole story.

As a counsellor, Hafid explained that he could not simply turn her away when she was expressing so much distress with her personal problems and that accepting a client without judging them is the most important part of counselling.

“I gave this student my phone number because she sent me a direct message on Instagram asking for help. She was in a difficult place.”

“Since then, she has been telling me the problems she was facing with her family and she started seeing me as an older brother. I told her it was fine, but I kept reminding her that I was her teacher.”

“She initially texted me normally. Although she kept calling me ‘abang‘ (older brother), I kept referring to myself as ‘cikgu‘ (teacher) whenever we spoke.”

“When she first texted me those inappropriate messages, I thought she was just joking around, but when she started trying to video call me, I realised she was being serious.”

We hope young students (and teachers) out there can understand the student-teacher boundary because that line should never be crossed. Let’s learn to respect each other more!

Also read: Perverted Teacher Sends “I Miss You” and “I Love You” Texts to 11-Year-Old Student 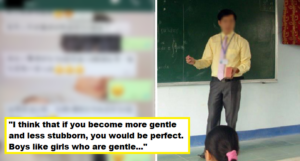