Recently, a YouTube video went viral as it showed a newlywed Chinese couple in bed practically forced into having sex on camera in front of their wedding guests, reported Daily Mail.

The video clip begins with the happy couple in bed under some red comforters in a room with a lot of red decor. That’s likely because the colour red is auspicious and is considered “lucky”.

Then some of the female guests, probably the jimuis, asked the couple to lose their pants, which they did. The wife went first, removing her grey leggings and it was taken by a rather ‘excited’ friend of hers.

Her red lingerie was next and then it was the poor hubby’s turn. He handed his black undies over to the guests.

The raunchy guests then demanded the couple to get intimate. It started off pretty softcore, actually, some light cuddling and hugging.

But of course, the guests wanted more of a show. They are heard saying “You climb onto his body now!” and other nasty stuff.

Then the guests started getting physical, one of the female guests even pulled the bride’s thigh to force her onto her husband.

“Are you two attached to each other?”

But the worst of all was when another female guest tried to ‘help’ them out by pressing on the bride’s butt, trying to ‘align’ her on her hubby’s hot dog. (Sorry JAKIM)

The guests can be heard laughing their socks out throughout the entire video. But did they have their fun? Not really, it would seem.

Because they went further by removing the comforters to get a better view.

The husband clearly was not feeling that into voyeurism that night as he snatched it back immediately to cover himself and his young wife.

This video went absolutely viral on social media, especially YouTube. Weibo users have pointed out that this couple is from the Zizhou county of Shanxi province.

Many have lamented the “wedding game” online, saying “It’s so scary. I don’t want to get married” and “How could the bridegroom laugh? His wife is being seen naked.”

Others have been rather neutral about it;

“There is no force here, I don’t see guns held to heads. “I’m not doing it, leave me alone” is a phrase that comes to mind.”

“Don’t just passively go along with things to keep others from making a scene and then claimed you were “forced”, it’s ridiculous, childish and false”

Wedding games in China have been growing notorious as they become overly sexual. As games get seriously out of hand, there’s now even a market for professional bridesmaids to handle these situations.

Also read: Chinese Bridesmaids in Danger As They Are Stripped And Molested During Weddings 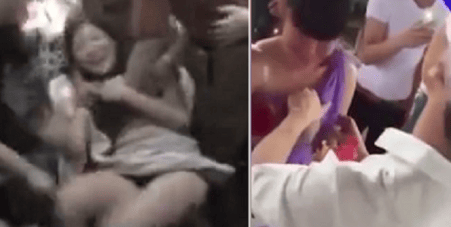