Playing games are part and parcel of the Chinese wedding culture. However, recently the games have become rather sexually explicit and even dangerous.

Over the years, there has been many incidences reported from China where wedding games went very wrong. Just recently, a newlywed couple was left feeling extremely awkward as unruly male guests tried to strip the bride right in front of the groom! 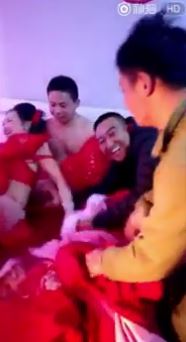 Apparently, it was all just a part of a wedding game but it obviously made the couple extremely uncomfortable even though they still kept on a smile throughout the whole ordeal.

The husband constantly tried to cover his wife with the duvet but those barbaric men still pulled off the cloth and continued their lewd attempts at undressing the bride. IN FRONT OF THE GROOM!

Those disgusting men wanted to take off the poor bride’s undergarment as she already had her dress removed! 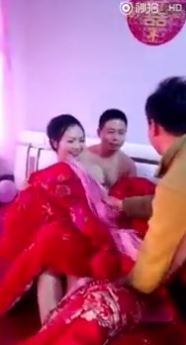 Unfortunately, this is not an isolated case, and these activities are usually taken over by bridesmaids. Bridesmaids are responsible for going through the ‘hurdles’ as part of the fun of the auspicious day. These hurdles include consuming large amounts of alcohol, taking part in those lewd games, and sometimes even getting attacked.

There was a case where a man was blindfolded and had to figure out who the woman before him was by touching her. He groped her breasts, buttocks, and even touched her private area under her skirt! 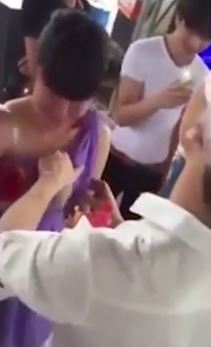 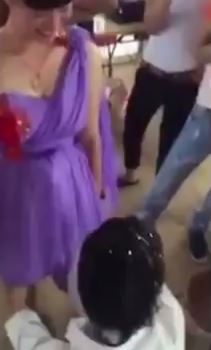 On a separate occasion, two bridesmaids were savagely stripped naked in the middle of the wedding by a group of uncouth men. Although they fought hard to push all the perverted hands away, more than 10 men pinned them down in sexual positions, groped their breasts and tried to undress them.

One man even took a pillow to smother one of the fighting bridesmaids!

As those vile men overpowered the women, they were actually able to take off those women’s clothes and started explicitly molesting those screaming women. 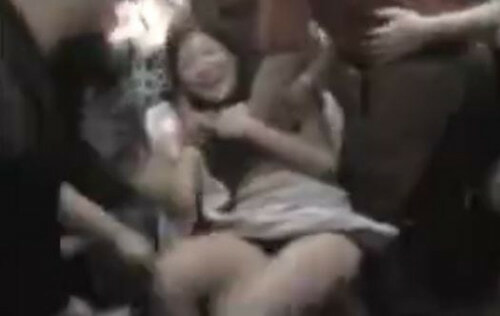 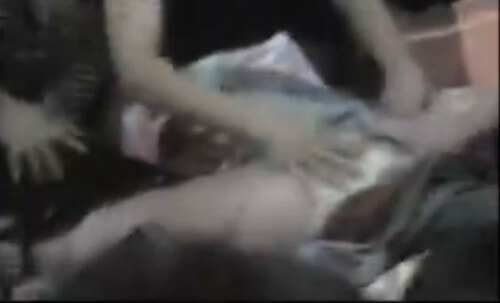 What makes things worse is that they are done in front of friends, family and relatives… AND while videos are being taken. You can only imagine the embarrassment these ladies must have felt…

It seems that this game might have been a sexual adaptation from a game where the couple would be laying in their bed and guests will have to find peanuts in the bed as well wished for the couple to bear children. In the Chinese language, ‘peanuts’ can also mean ‘having children’. 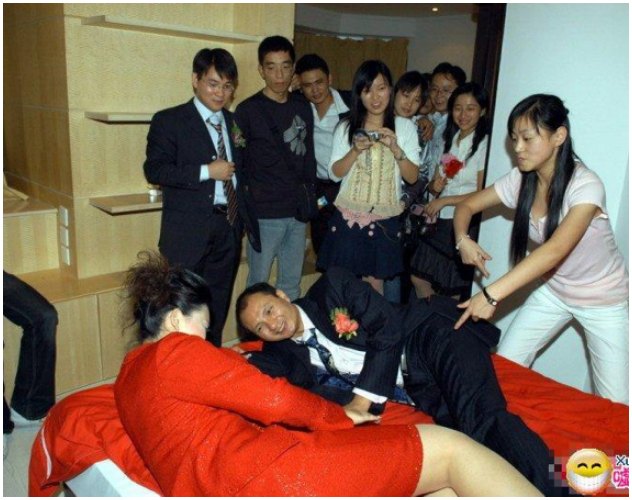 As this situation continues to get out of hand, many women have been rejecting the role of bridesmaids. So much so that being a bridesmaid has become a profession in China!

According to Quartz, wedding packages today often came with the option of hiring a ‘professional bridesmaid’. The cost of hiring them includes the level of difficulty in handling those tasks. These professionals are paid between 200 to 800 yuan (RM120 to RM500) per wedding.

Although a step has been made to overcome the lack off women willing to be bridesmaids, it still doesn’t curb the root of the problem. The main issue is the chauvinistic and alcohol induced activities in today’s weddings in China.

It is absolutely perplexing as to why the Chinese still carry on with these ‘wedding games’ because they are already borderline rape.

If these horrible activities turn into the norm, it may very well turn into a tradition as well since the next generation may continue on with them.

In Related News: Video Captures Last Moments of Chinese Bridesmaid Trying To Down Alcohol Before She Died