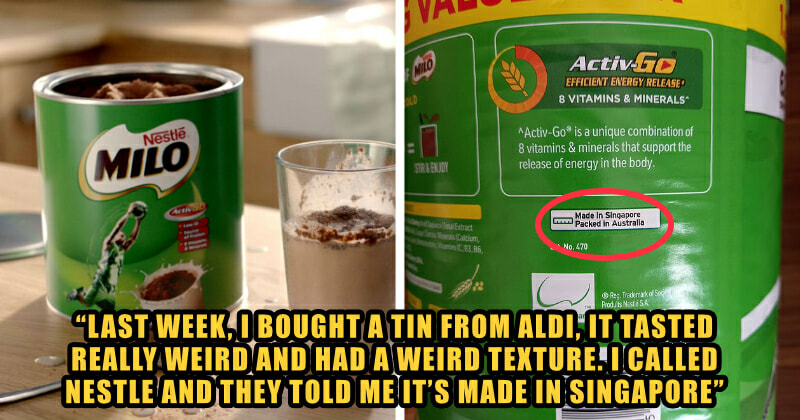 Did you know that Milo, one of the most famous chocolate drinks in Malaysia actually have different ingredients and tastes throughout the world? In fact, even our neighbouring countries in Southeast Asia have different tasting Milo, most notably the ones found in Indonesia compared to ours.

Well, it seems that this fact is not known to Milo lovers in Australia as many consumers in the country were outraged to find their Milo tubs bought at local supermarkets tasting ‘weird’ and ‘powdery’ only to realise that the packaging was made in Singapore. As reported by the Daily Mail, customers of Aldi supermarkets in Australia are furious to find out the large tubs of Milo sold at the store are made in Singapore.

One customer even posted a warning to others on a popular Aldi Facebook page that the Milo sold there have a ‘revolting’ taste. The customer wrote,

“Last week I bought a tin from Aldi, it tasted really weird and had a weird texture. I called Nestle and the lady told me the 1.25kg tins are being made in Singapore while machines here are updated,” 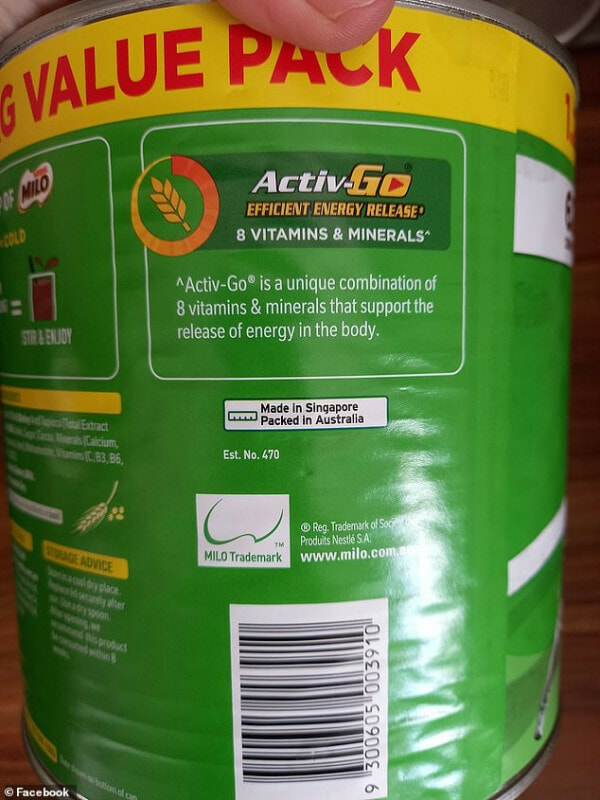 “Make sure you check the back of the tin if you want Milo that tastes like real Milo.”

Other Milo lovers in Australia also found that the Milo that they bought in other stores are also tasting weird. In fact, a customer even threw out the cans after being put off by the ‘off tasting’ Milo that he couldn’t check where the Milo tub was made.

Another Australian customer said that his family has gone through about a kilogram of Milo each week and have noticed that the taste has been inconsistent. He said,

“Sometimes I get a normal tin, then I get an off tin and just suck it up because they are so expensive. I was beginning to think I was crazy because sometimes it is good and sometimes it isn’t so I am glad I am not the only one.”

Meanwhile, one woman said that she had a glass of Milo and couldn’t stomach it because it tasted ‘nothing like her childhood’. She contemplated whether it was because her taste buds have changed but believed that it was because she had the Singapore one.

Following the outrage, Nestle Australia posted a statement saying that they were stocking Australian market with Milo made in Singapore while upgrade are being made to their factories in Australia. Nestle asserted,

“Milo is proudly made in Smithtown on the NSW and mid-North Coast – where it has been made since 1934. We have been investing in upgrading our factory for the future. To ensure Milo fans didn’t miss out during this time, we imported some Milo from our factory in Singapore.”

Nestle has been producing Milo in Singapore since its factory in Jurong, the single largest factory for the production of malt extract in the world, was opened in 1984. Milo produced in Singapore is also exported to other countries, including Malaysia in varying quantities. 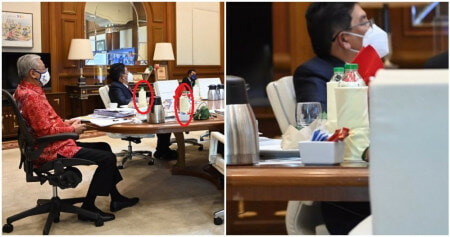